An award-winning blues singer/songwriter, the affable Williams has released 10 albums and has an international reputation for what he calls his “disturbed folk” music, which pushes the boundaries of conventional playing through incorporation of innovative effects. 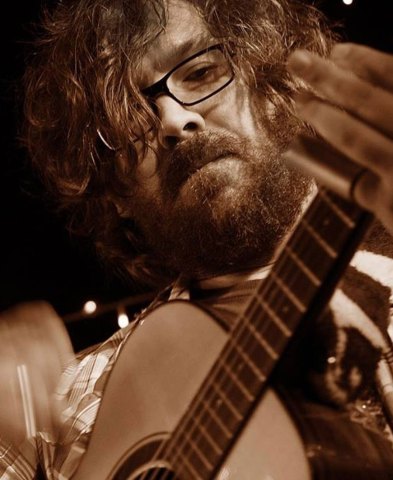 His varied and engaging set of folk blues opened the program. He entered the theatre already playing and singing, with an up-tempo version of Leadbelly’s “Midnight Special” that invited an audience sing-along. They were instantly on side and enjoying themselves.

An absorbing take on Blind Willie Johnson’s “Lord, I Just Can’t Keep From Crying Sometimes” offered restrained countertenor vocals over a fast-train rhythm. If you want to know the meaning of the blues, look up Johnson’s life story.

Particularly successful was Williams’ own “Field Holler”, with an infectious rhythm plus a call and response from the audience; again, a winning device. A seductively foot-tapping “Cocaine Blues” (Rev Gary Davis) was rendered with invigorating snap and pop that counterpointed the melancholy nature of its lyrics. Furry Lewis’s joyous “I Will Turn Your Money Green” included the redoubtable Chris Finnen on second guitar swapping solos, as well as more audience participation.

A highlight was the closing and irresistible “Death Letter Blues”, largely played on slide. Its syncopated start ushered in gruff, saturated rhythm playing and individually lustrous notes, all with unexpected turns. Wonderful stuff.

Jeff Lang’s credentials are in no doubt. The ARIA-award winner has also twice won the Best Australian Blues Album award and is celebrated for his mastery of just about anything with a fretboard.

Sitting down for the first few numbers, Lang employed his Churchill lap-steel to great effect. Danny McKenna accompanied on drums for each song.

The wistful and atmospheric torch ballad “Some Memories Never Die” meshed haunting lyrics with keening guitarwork that graded temporarily into distortion. It underlined how volume was to be ramped up throughout his set.

“Watch Me Go” was a little shrill, perhaps a sign of the acoustics in the Space Theatre. His popular “I Want to Run, but My Legs Won’t Stand”, about a spiked drink, produced a wall of frenetic sound. Lang dedicated “Twelve Thousand Miles” to the late Chris Whitley, with whom he had performed and recorded, here using a loop and effects through his battery of devices. 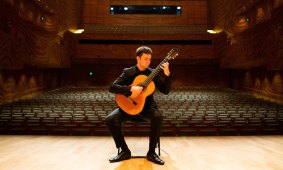 Lang is a comfortable raconteur and a yarn preceded his “suitably morose” song “The Promise of New Year’s Eve”. He performed on a conventional guitar for this, ending with much extemporising. Finnen reappeared for “Ravenswood”, previously recorded with Lang, and the evocative “Standing on the Shore” followed. “I Don’t Like Him Being Here”, a song of suspicion, was dark and very effective. Even more sinister was “Running By the Rock”, whose rich sounds evolved into thundering passages and a bruising finish (plus an overlong drum solo from McKenna) to close Lang’s set.

Cal Williams Jnr and Jeff Lang performed together for one night only as part of the Adelaide Guitar Festival, which continues until the end of July. See the full festival program here.