Johnston’s opening choice of “Bach’s Violin Sonata No. 1 in G minor” was inspired. Its adagio begins meditatively then accelerates through the sometimes languid, almost gossamer siciliano movement to the closing presto with its dynamic flourishes. Johnston was right on top of it, bar the occasional buzzed or imprecise note. That it was not flawless only endeared the effort. 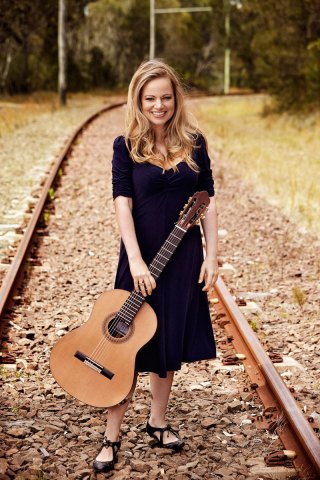 The captivating “Introduction et Caprice” (Giulio Regondi) was embroidered with enchanting runs and, continuing the metaphor, clusters of notes expertly threaded together with glissando (rapid slides down the fretboard). It was hypnotic playing; a kind of fractured lullaby that includes diverting false endings before a final bang.

Leo Brouwer’s “Sonata” required finely articulated fingerwork, with frequent muting and harmonics. Its washing rhythms, irregular beats and fills were well handled, with shining bursts of notes like unexpected fireworks. A brief encore by Brazilian composer Sérgio Assad rounded out Johnston’s performance. In all, his playing confirmed his awards and accolades are well-deserved.

Karin Schaupp has an international reputation and her playing on this night was stellar. She also knows how to engage personally with an audience, adding a few anecdotes and self-deprecating quips between the seven pieces played.

She then switched to a locally crafted wave-top guitar made by luthier Jim Redgate (who was in the audience). An instrument with strong, warm tones, it was used to great effect in Phillip Houghton’s contemporary five-part “Ophelia – A Haunted Sonata”. The obvious narrative form of this composition was made clearer both by Schaupp’s introduction and her expressive performance.

Spoken word was the key to “Suspended in a Sunbeam”, a slightly sentimental rendering composed for Schaupp that blended fragments of a Carl Sagan text with sparking guitar notes. There was a slight volume imbalance with the guitar sound sometimes overshadowing her narration.

Isaac Albéniz’s popular “Asturias”, akin to Andalusian flamenco, was brilliantly played. It is a determined piece with a melancholic interlude that she captured beautifully. An encore of Antonio Lauro’s capricious “El Marabino” finished off her program in a lighter and delightful mood.

It was a pleasure to see an emerging artist paired with an established one and to appreciate their different styles and musical choices. Kudos to Slava Grigoryan, the program organiser, for his inclusion of these fine players.

Karin Schaupp and Miles Johnston performed together for one night only as part of the Adelaide Guitar Festival, which continues until the end of July. See the full festival program here.