With a recent UN report highlighting the million endangered species on the planet, it is timely for State Opera to be performing an opera that explores the relationship between humans and the animal kingdom. It is also pleasing to see Czech composer Leoš Janáček’s beautiful music brought to life by the Adelaide Symphony Orchestra before an audience at the Adelaide Showgrounds’ Ridley Pavilion.

The essence of the animals is captured through the use of modern clothing – yellow and black polo shirts for bees, racquets for wings, striped leggings for chickens, and an outlandish red suit, hair and sunglasses for the Cockerel – and the cast, including members of the State Opera Children’s Chorus and State Opera Chorus, have found styles of movement that entertainingly portray their animal beings.

James Clayton is the grumpy Forester who at the outset takes home a young and spirited fox cub he finds in the woods, while Joanna McWaters beautifully portrays the hard-headed and pragmatic Forester’s wife, who is much wiser about the nature of animals.

We next see the cub as a vixen, played delightfully by SA soprano Desiree Frahn, who moves coquettishly and is radiant when she sings. Not wanting to be like a domesticated, tamed dog, the Vixen lashes out and kills the Cockerel, who only moments before had explained to the chickens that she was not to be trusted. 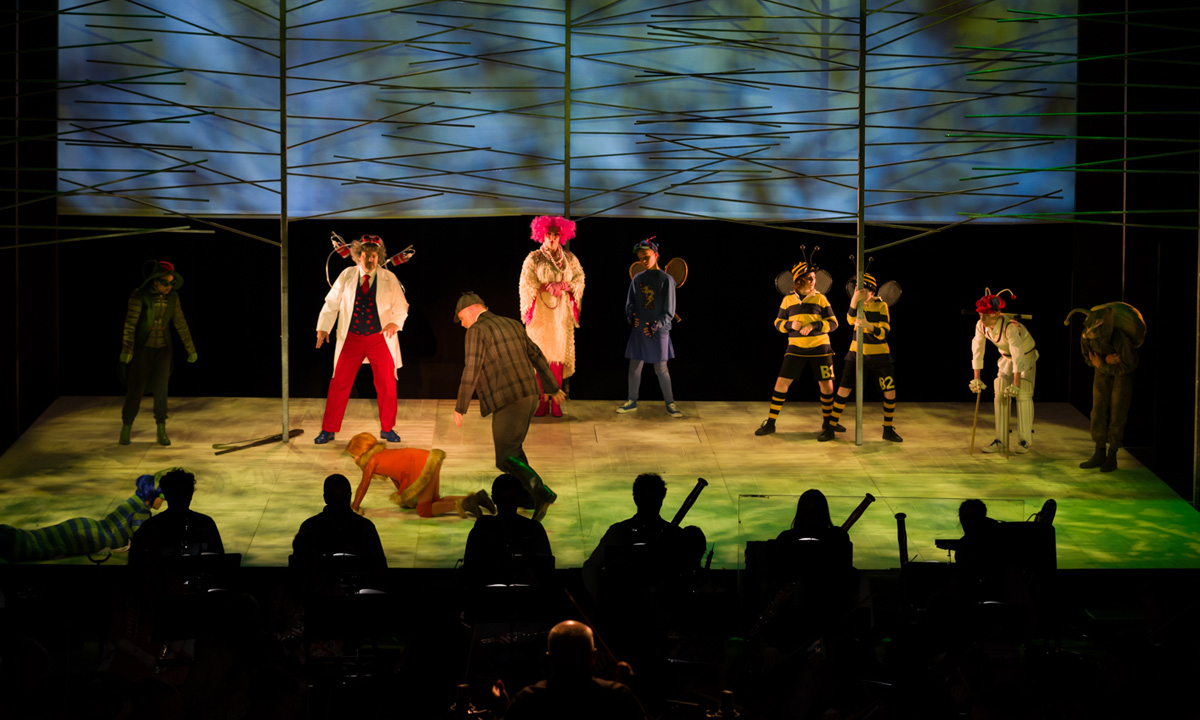 As the audience follows the story of the Vixen and her escape back to the forest, we also see human events transpire as the Forester meets with his friends the Schoolmaster and the Parson, both of whom have some difficulties with their relationships with women. In a sunflower field, the Schoolmaster mistakes the Vixen’s movements for those of the woman he is infatuated with, and the Parson is troubled when he recalls an encounter he had with a woman in his youth.

There is more romance as the Vixen finds self-worth in the expressions of love made to her by the dapper Fox, played by Antoinette Halloran. Halloran’s sense of comedy brings a wry grin and smugness to her character, and she and Frahn share some wonderful stage time including beautiful duets that rapidly move from initial courting, to nesting and having a litter of pups.

The romantic notion of the idyllic life of animals is abruptly destroyed by the arrival of the poacher Harasta, played with great presence by Douglas McNicol, yet the final act is peaceful and contemplative as spring brings fresh life and hope to the forest.

Directed by State Opera SA artistic director Stuart Maunder, Cunning Little Vixen is attractively staged and a pleasure to listen to, with conductor Johannes Fritzsch making the most of every nuance, subtlety and powerful crescendo. Janáček‘s work has been compared with that of Debussy, and it certainly evokes the many moods of nature and human nature as the libretto explores the cycle of life and human experiences, with moments of anguish.

The opera was written in the 1920s and there is a sense of independent headstrong women being seen as both desirable and problematic, but the music and staging remain relevant and appealing, and its questioning of humans’ relationship with nature is more important than ever.

State Opera SA is presenting Cunning Little Vixen at the Ridley Centre, Adelaide Showgrounds, again on May 23 and May 25. Read InDaily’s interview with Desiree Frahn here.