From the solo sax melody of opening number “Careless Whisper”, to Wham’s upbeat ’80s pop hit “I’m Your Man”, the poignant ballad “Jesus to a Child” and the cheeky “Outside”, Listen to Your Heart showcases the musical versatility and talents of both Michael and the concert’s singers and musicians.

De Silva, original frontman of 1990s RnB group CBD and 2012 Australia’s Got Talent winner, sounds the most like Michael, but it is Donovan and Sheridan who really make the songs their own.

Donovan may have been nervous about her first performance with an orchestra – “My legs were shaking!” she later admitted to Foreman – but the audience was oblivious. Her pure, powerful voice was absolutely captivating, both in solo numbers such as “Jesus to a Child” – written following the death of a lover – and duets, including “I Knew You Were Waiting (For Me)”, which Michael performed with Aretha Franklin. They’re mighty big shoes to fill, but Donovan (singing here with De Silva) does the diva proud. 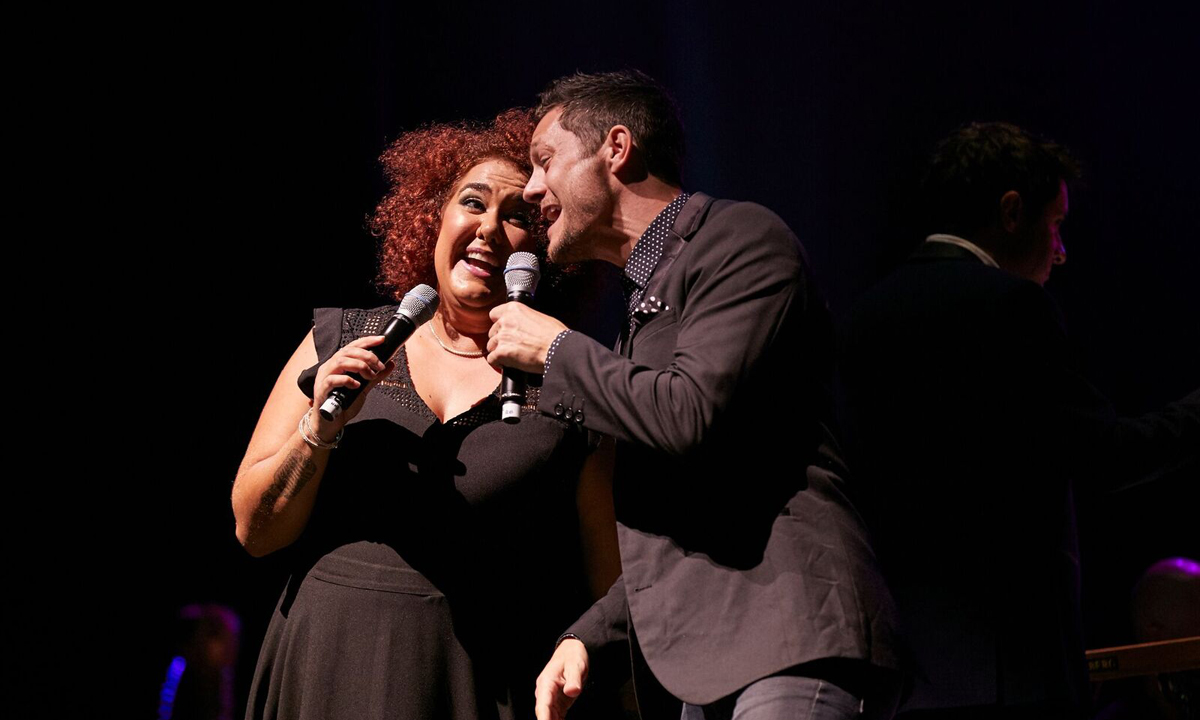 Sheridan –  an actor who has focused in more recent years on singing and launched vocal group California Crooners Club at the 2016 Adelaide Fringe – was another highlight in numbers such as “Kissing a Fool”.

The most theatrical moment of the night came with “Outside”, the defiant single Michael released in the late 1990s to make it clear he wasn’t ashamed of his sexuality, after being arrested for engaging in a “lewd act” in a public toilet. Entering stage left in a chest-exposing open leather jacket and dark glasses, as police sirens sounded and flashing blue and red lights illuminated the stage, Sheridan thoroughly embodied the cheeky rebelliousness of the song.

The program also features ensemble pieces, including “Faith” and the finale “Don’t Let the Sun Go Down On Me”. A full band and the backing vocals of Gospo add another layer to the performance, while the talented members of the ASO take the well-known music to a whole new level.

Timed to coincide with the 30th anniversary of the release of Michael’s debut album Faith, Listen to Your Heart is, as the charismatic Foreman promised, a journey through both the music and life of George Michael – including songs of love found and lost, of triumphs and struggles – and the packed opening-night audience at the Festival Theatre lapped it up.

A standing ovation brought many to their feet, while the encores had them dancing, clapping and singing in the aisles.

The final performance of George Michael: Listen to Your Heart will be presented by the ASO, in association with the Adelaide Festival Centre, at the Festival Theatre tonight.