Stigwood, who managed the Bee Gees at the height of their fame and guided musician Eric Clapton’s successful solo career while producing musicals for the stage, died aged 81, friends said yesterday.

The announcement of his death was made on Facebook by Spencer Gibb, a son of Bee Gees’ band member Robin Gibb.

“I would like to share the sad news with you all, that my godfather, and the longtime manager of my family, Robert Stigwood, has passed away,” Gibb wrote.

Gibb described Stigwood as a “creative genius with a very quick and dry wit”.

“I would like to thank Robert for his kindness to me over the years as well as his mentorship to my family. ‘Stiggy’ you will be missed,” Gibb wrote.

Andrew Lloyd Webber posted a photograph of himself with Stigwood and US producer Hal Prince at Evita’s opening night in Adelaide in 1980, and tweeted: “Farewell beloved Robert, the great showman who taught me so much. With love, ALW.”

Stigwood was born in South Australia on April 16, 1934, the son of Gwen Burrows and Robert Stigwood, an electrical engineer. After completing his schooling at Adelaide’s Sacred Heart College, he began work as a copywriter for an advertising agency in South Australia.

In 1955, he moved to London – reportedly with three pounds in his pocket. After a string of humdrum jobs, he founded a theatrical agency, Robert Stigwood Associates, with partner Stephen Komlosy.

When one of the agency’s actors, John Leyton, scored a No.1 hit with “Johnny Remember Me”, a song featured in the TV soap Harper’s West One, Stigwood began to focus more on music clients. He became one of Britain’s first independent music producers.

In the mid-1960s, he suffered financial troubles, but climbed out of bankruptcy and in 1966 briefly became The Who’s booking agent.

Two of Stigwood’s other early acts were Eric Clapton, then with the band Cream, and the Bee Gees (Barry, Robin and Maurice Gibb). He produced their early records.

Stigwood moved into theatre production in the late 1960s. After seeing Hair in New York, he staged the musical in London’s West End, where it ran for more than five years.

Among the other stage musicals Stigwood produced were Oh! Calcutta!, The Dirtiest Show in Town, Pippin, Sweeney Todd and Evita.

When the careers of Clapton and the Bee Gees, his two main clients, fell into a rut in the early 1970s, Stigwood turned to film work. He produced the 1973 film version of Jesus Christ Superstar, the Andrew Lloyd Webber-Tim Rice musical.

By now head of the Robert Stigwood Organisation, he again signed Clapton and the Bee Gees. Their careers soon revived: Clapton scored a 1974 hit with “I Shot the Sheriff”, and the following year the Bee Gees transformed themselves into disco divas with “Jive Talkin’”.

Stigwood developed a tactic of using rock stars (many of them his clients) in films he produced. His 1975 film of the rock opera Tommy, featuring Clapton, Elton John and Tina Turner, became a box-office and album hit. 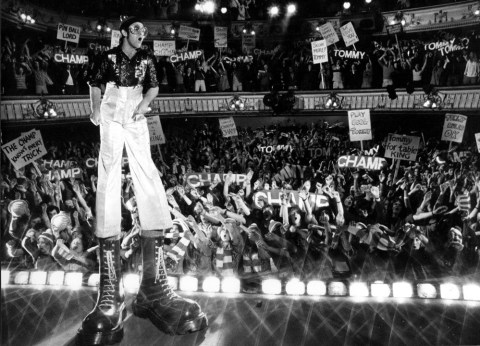 His empire expanded into television in the early 1970s, buying a controlling interest in the writers agency Associated London Scripts (ALS), which went on to develop the hit US TV comedies All in the Family and Sanford and Son, both based on British TV shows.

In June 1976, Stigwood read a New York magazine article, about “tribal rites of the new Saturday Night”, written by British journalist Nik Cohn. It concerned a working-class Brooklyn teenager and his friends who would go to a disco every weekend, finding meaning to their lives on the dance floor.

Stigwood paid $US90,000 to buy the film rights, deciding the project would be the ideal vehicle for one of his clients, the up-and-coming actor John Travolta. (Travolta later joked: “I auditioned [for Stigwood] five years ago, and I just heard back!”)

Screenwriter Robert Wexler (best known for Serpico) was hired to transform Cohn’s article into a screenplay, and approached the Bee Gees to provide many of the songs.

The film’s release in late 1977 transformed John Travolta from a TV actor to a film star.

The double album became the biggest-selling soundtrack album ever, selling an estimated 25 million copies: three of the Bee Gees songs became No.1 hits, as did Frank Valli’s title track.

However, contrary to popular memory, Saturday Night Fever was not a fluffy disco film, but a gritty drama.

Stigwood followed up in 1978 with another hit film and soundtrack, Grease, starring Travolta and Olivia Newton-John.

Stigwood produced a string of productions in the 1980s and 1990s, including the film musical Times Square, and films The Fan, Bugsy Malone, Grease 2, Gallipoli (directed by Australia’s Peter Weir). In 1996 he produced the film of Evita, the Lloyd Webber-Rice musical that starred Madonna as Eva Peron.

Stigwood lived for many years on the Isle of Wight, off England’s south coast. He sold Barton Manor, his estate there, in 2005.

Last year, he was inducted into the South Australian Hall of Fame. The ceremony took place at Australia House, in London.