First, there was the triumphant, highly emotional return of London terrorist bombing survivor Gill Hicks to the live singing stage. The bravery of this woman and her desire not for revenge, but for a lasting world peace, is phenomenal. So was her performance on Friday night.

Then the audience was treated to the first show in 40 years by the Moonshine Jug and String Band, including the Brewster brothers, John and Rick, later of internationally successful band The Angels.

In keeping with the tried and proven AMC format, the evening at the Goodwood Institute was opened by two of Adelaide’s most notable emerging performers: Sasha March and Banjo Jackson.

Modern indie folk singer March was first up, with beautifully crafted emotive lyrics, sparsely melodic guitar, a soulful voice and an understated command of the stage that had the audience enthralled.

Jackson has been blessed with a fine head of hair tailor-made for a rootsy folk singer and parents who had the good sense to give him a fabulous first name. But there’s more to this excellent singer-songwriter than that – including Frank, his trusty sidekick and tasteful violin player, who adds lovely touches to the clever original tunes, which are notable for their honesty and Australiana themes.

That Gill Hicks was able to walk out on to the stage at all is a triumph of the human spirit and the refusal of paramedics to let her die. As well as losing her legs in the 2005 blast, she also lost most of her hearing and suffered throat burns, but her jazz-trained voice is still strong and beautifully melodic.

At the AMC session she sang “I Want to Tell You”, a plea for peace written by Gary Burrows and recorded with the help of AMC founder Enrico Morena, John Bywaters (bassist for The Twilights), Richard Coates (piano/accordion) and Burrows on guitar. They were assisted by members of the Immanuel College Choir on harmonies. It was an uplifting performance of courage and optimism, with Hicks and Burrows sharing lead vocal duties on alternate verses.

AMC Hall of Fame proceedings started with excellent video tributes to the already-inducted Doc Neeson and newly (posthumously) inducted Adelaide legend Chris Bailey, bassist for many local, national and international bands including Red Angel Panic, Headband, Mount Lofty Rangers, The Angels and GANGgajang. Apart from his top-level musicianship, Bailey was revered as one of the most-loved and respected members of the music industry. Australian music was as enriched by his presence, as it was saddened by his passing.

Alex Innocenti was next inductee, recognised for his tireless promotion of local music and musicians through legendary city club The Cellar. He was also a promoter of large-scale outdoor blues spectaculars and long-weekend shows, including the massively successful Myponga Music Festival of 1971, which featured an appearance by Black Sabbath and the launch of one of Ross Wilson’s little projects called “Daddy Cool”. 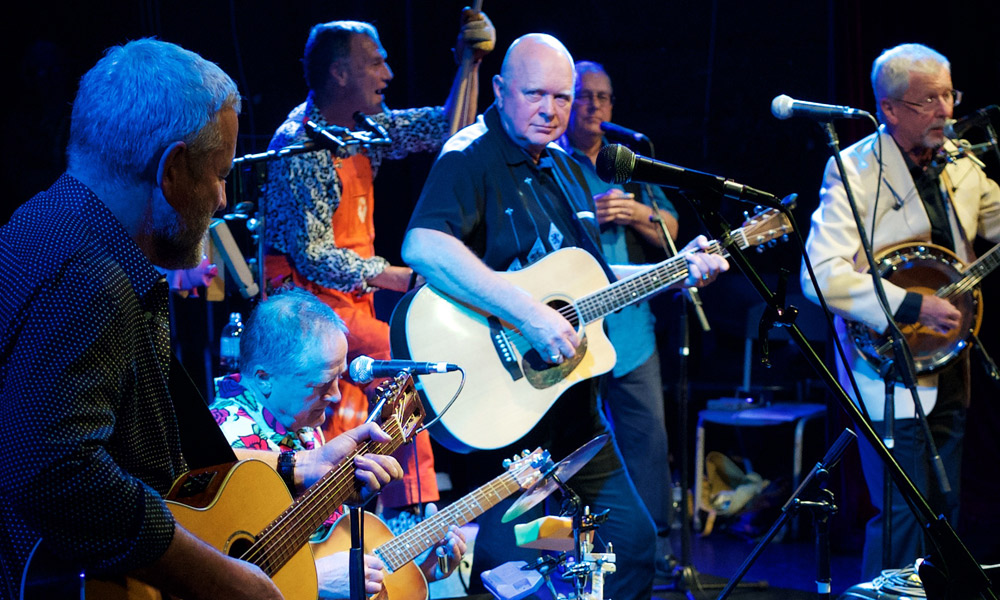 Finally, Hall of Fame host John Pemberton welcomed the Brewster Brothers to the stage to receive the award for the fabulous Moonshine Jug and String Band, a seemingly unlikely pre-curser to the wildly successful Angels. It is fascinating to chart their progression from 1920s-style acoustic swing – with rootsy instruments like banjo, jug, washboard, washtub bass, harmonica, even kazoo – to the hard-rocking Angels.

The Brewsters say it was all about the songs they were writing – songs which lent themselves more to electric instruments than an organic style.

Original Moonshine members – brothers Brewster, Spencer Tregloan, Pete Thorpe, Craig Holden (in for Doc Neeson, but himself also a member in the 70s – ripped into an amazing set of rollicking, good fun, exquisitely played dance-hall favourites from the 1920s. “The Sky is High and So Am I” and “Ants in My Pants” were the standouts in an amazing performance.

Most audience members I spoke to felt this was the best AMC Session yet. The successful format continues for the last event of the year, on November 13 at the Goodwood Institute, with a line-up including Bill Chambers, David Moyse, Bearded Gypsy Band and Maggie Rutjens (details here).