Returning home to Washington DC from a holiday, we approached an immigration officer in Miami. He looked over our working visas and asked the obvious question: “What do you do?”

“Huh, he replied – then with a sheepish grin: “Our new President doesn’t like you”.

My wife, a climate lawyer, followed behind me and was asked the same question.

“Ha!” he exclaimed this time, “Fake News! Fake Science! Have a great day!”

It was a trivial exchange but one that was emblematic of divisions rapidly being sown in Donald Trump’s America. Everything could be weaponised for political gain.

As the Supervising Producer in the ABC’s Washington Bureau, I had a front row seat to the rise of Donald Trump: from joke candidate to leader of the free world.

As president, the Twitter notifications buzzed at all hours of the day and cable news blared endless breaking news straps. The words “historic” and “unprecedented” were tossed around with a numbing regularity.

It created a relentless news cycle that could easily become all-consuming. Yet, when we looked beyond the headlines, we found countless American’s hungry for change – and desperate for the political upheaval Donald Trump promised.

It was hard to believe “Trumpland” existed in big liberal cities like New York or Washington – but head 50km out of DC and Trump yard signs and MAGA hats were everywhere.

Many say ‘enough’ at the mention of his name now – preferring to see the past four years as an aberration – but that is to ignore the long shadow Donald Trump will cast over America and politics at large for years to come.

Yes, Joe Biden won the presidency and received more votes than any president before him – but so too did Donald Trump – expanding his support by millions since 2016. Think on that: after all the hysteria, scandal and chaos of his administration, more people said, “sign me up for four more years of that” than before.

Dan Moore: “I don’t feel like, myself, that I need to be deprogrammed, re-educated or that I’m a member of a cult. ” Photo: Zoe Daniel

Donald Trump succeeded, in part, because he co-opted America’s Republican Party and used a complicit right-wing media eco-system to propagate his lies and conspiracies, which were readily consumed by a legion of diehard followers.

It is easy to deride those followers as crazy but that is an easy out. Imagine three times the population of Australia all casting their vote for Donald Trump – this is a critical mass – and it cannot be ignored.

I met many of them while crisscrossing America: real estate agents, bartenders, farmers and factory workers. College kids, elderly folk, Black Americans, Latinos and everything in between.

To shrug off them as racists, sexists or stupid is to ignore the complexity of Trump’s base. It ignores the fact that he carried the flag of a political revolution: a rejection of establishment politics that appealed to many.

Take Dan Moore, a boilermaker from Ohio, who twice voted for Obama but now staunchly supports Trump. He’s seen his town decimated by free trade deals, automation and a changing workforce. The Global Financial Crisis crippled regions like his and never recovered.

I first spoke to Dan in late 2016 before Trump was elected. He was like many Trump supporters I had met as we tried to unravel this political phenomenon: earnest, generous with his time and desperate to be understood.

In Trump, he found a voice.

“There’s a really rising sense of anger, frustration and disenfranchisement that nobody in Washington DC is listening,” he said at the time.

Four years later, after repeated scandal, and punctuated by the dark insurrection on the U.S. Capitol, it’s hard to remember where the movement began.

The violent attack allowed his supporters to be universally dismissed as crazies from the fringes of society. It was the ultimate ‘I told you so’ for Never Trumpers.

But regular people, like Dan, who weren’t there that day and don’t condone the actions of those that were, remain ever loyal to Trump.

“I’m sorry that it turned out this way,” he told me on the penultimate day of Trump’s presidency, “I wanted four more years”.

“I don’t feel like, myself, that I need to be deprogrammed, re-educated or that I’m a member of a cult,” Dan said.

“You can’t look at every member who supported President Trump and say, ‘Well, this man is an extremist. He’s on the far right. He wants to overthrow the government. That’s nonsense”.

The Capitol insurrection will be the charred remains of Donald Trump’s presidency. A systematic dismantling of America’s most fundamental institutions over four years.

Trump’s refusal to concede has seeped into the psyches of many Americans and his messy departure has turbocharged the next iteration of a world that increasingly trades on disputed facts and fake news.

His supporters remain active on social media – peddling in conspiracy theories about the election, and getting their information from more fringe, hyper partisan news sources such as One America News Network and Newsmax.

It’s part of Trump’s legacy and it won’t be easy to reverse.

Seventy-four million Americans cannot be pushed aside. Ignoring their gripes is politically fraught. Leaders must understand why voters are increasingly looking to the margins for candidates to represent them. 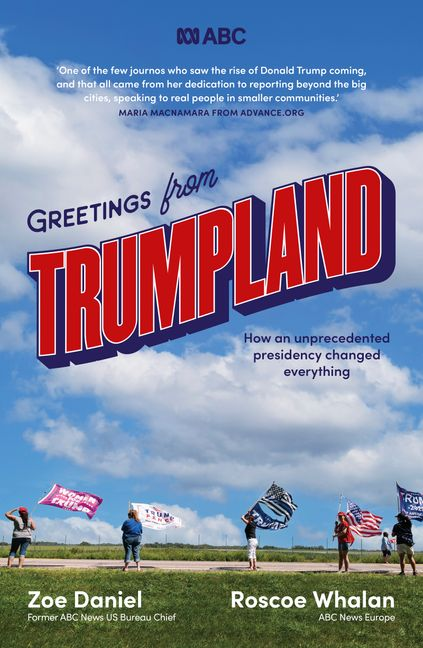 “We need a lot more outsiders,” Dan told me. “Trump came in as an outsider and a disrupter and we see what happened.”

Australia is not immune to Trump-style politics.

We too have an increasingly outrage-driven, partisan media landscape, growing communities of conspiracy theorists on social media, and cheap point-scoring politics that take a leaf out of the Trump Playbook.

For politics to move past Donald Trump, it first requires an acknowledgement that he is not a glitch and his supporters won’t return to regular political programming.

Without this, Joe Biden’s victory may in fact be the aberration.

Roscoe Whalan, a former Adelaide reporter, is the ABC’s Supervising Producer in its London Bureau and the co-author with Zoe Daniel of Greetings from Trumpland: how an unprecedented presidency changed everything, available now in all bookstores.