The reality-TV machine has churned out some incredible talent over the years, and wherever they placed in the competition or where they land in the food-game, former contestants and winners generally have one thing in common: they’re all hungry for future success.

There are the ones who manage to snag their own TV spots, others who take on apprenticeships to become qualified chefs, and those who tread the now well-worn media path who take on various culinary projects, release cookbooks, create product ranges, or skirt around the edges of the food world until the next round of the series produces new talent. And here in SA we’ve worked our way through dinner parties and mystery box challenges, competed against globally renowned chefs, and certainly earned our stripes across various versions of cooking shows, producing more winners than most other states.

After taking out the top spot in MasterChef season 10, Sashi Cheliah set up Gaja by Sashi here in Adelaide, but it was his recent reappearance on the Fans & Favourites edition of the show that reminded me to finally go check it out.

Entering the compact, corner café-bar-style venue, I immediately notice design elements that aim to emulate Singapore’s Hawker markets: a street vendor cart at the entry, brightly painted shutters to the rear, and a graffitied abstract elephant mural on one of the walls. The interior is otherwise industrial, with exposed ductwork on the ceiling and a bare concrete floor.

Some earlier research explains that Sashi’s cooking style is influenced by Indian, Singaporean and Malaysian cuisines, and the menu at Gaja is succinct, with only three to five items in each section. The drinks list has more choices, aiming to show off some of the state’s best, and the line-up of gins from recognised SA brands above the bar tells a similar story.

Staff, while enthusiastic and friendly, seem a bit disorganised. We’re directed by two different people where to sit, and then three come over to take our order within minutes of each other, but eventually, we get there.

The first of the ‘Small Bites’ dishes are Urad Lentil Piaju, fried with a crunchy outer and textural centre. Topped with a light and spicy tomato jam and slice of pickled cucumber, they are a nice enough start, but there’s a strange paste-like texture to the pale grey sauce beneath. The menu reads burnt onion raita, typically a flavour-infused yogurt sauce or dip, but this version has a distinct taste of ash. The main flavour in the bite is offered by a single curry leaf atop each. 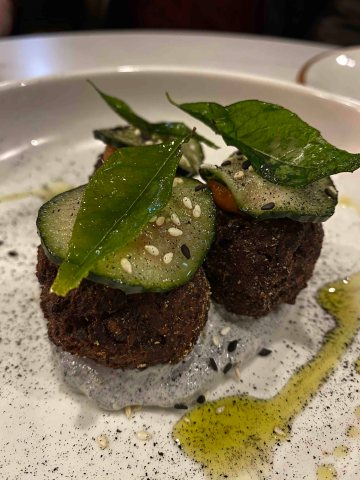 The Urad Lentil Piaju atop a ‘burnt’ onion raita.

And then onto Aloo chop; another fried street-food-style snack in the form of potato fritters. Four of these arrive lined up on a plate, held in place by tomato chutney beneath and topped with a squirt of something green that resembles guacamole and slivers of pickled kohlrabi. It’s pleasant enough, but I’m hopeful our next dishes introduce us to a little more flavour – something this chef is apparently known for. 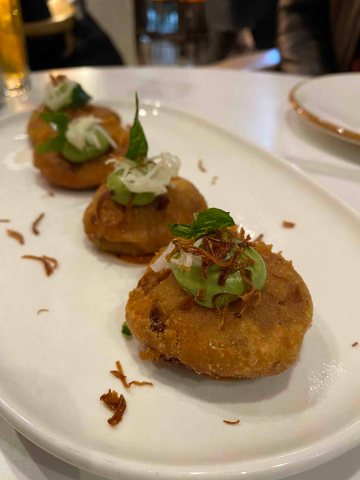 ‘Medium Bites’ offer some promise with the arrival of a fish dish presented in a banana leaf. The parcel envelopes two small fillets of King George whiting, nicely steamed with a flaky texture and pungent and punchy curry flavour. It’s topped with fried straws of potato and some crisp shallots. It’s a simple preparation but it works. I’m starting to question the value here at $36 for this dish, considering the size, but we take the few mouthfuls and move on. 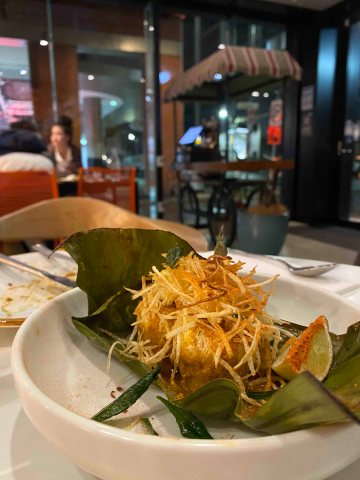 And then comes braised pork belly. On the menu, it reads as a dish that might be sweet, with jaggery caramel (a light syrupy concoction made using cane sugar), but the listed additions of pickled white radish, peanut and onion ash lead me to expect something with some salty, bitter or earthy flavour. It’s not. The dish is sugary, almost to the point of sickly. The presentation hasn’t helped. These are some tough bites to swallow and have landed on the table as cold as the food on the telly must taste. 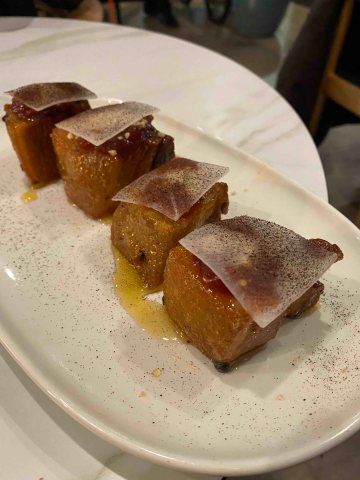 Gaja’s saviour tonight is Chettinad chicken, a delicious curry with a tomato masala base (also $36). Sections of chicken are cooked until they fall off the bone, in a gravy that has good balance and medium spice. Promised mint chutney is either hidden beneath or missed, but the heat of the dish is softened by a drizzle of yogurt and a pile of pickled kohlrabi that provides some crunch and texture to the dish. 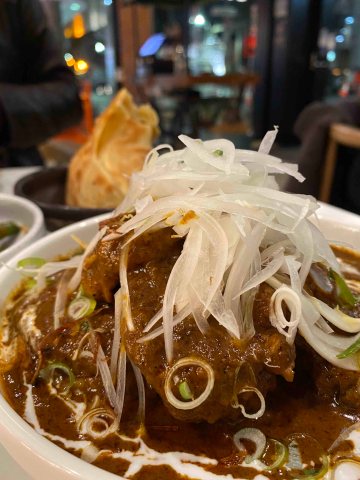 Chettinad chicken: the best dish on the night our reviewer visited.

A side of beans with tomato sambal and sesame seeds is fine. Nicely cooked and spiced, but for $16 I’d expect more than a handful.

Next is Lachha roti. This is house-made, though I expect it might have been cooked the day before. The table next door sends theirs back, and after one bite I consider doing the same. Somehow, it’s both dry and oily. Sweet and oily. Crumbly, like shortcrust pastry, and oily.

Away from the bright TV lights, something’s really gone wrong in the kitchen tonight and it’s a shame. Sashi’s dishes may have impressed those MasterChef judges, but this one’s going to need a lot more convincing.