I was recently asked: if I had to choose a death-row meal served at an Adelaide restaurant, what would it be? One dish. No substitutions.

After some serious reflection and a fair amount of internal turmoil, I finally came up with an answer: Nido’s ricotta with black pepper, honey and gnocco fritto. It’s the simplest of dishes but is pure magic. You start with the gnocco fritto (that’s Italian for delicious, fried, pillowy bread) that you rip apart and dunk in a pool of whipped ricotta and honey. It’s sweet and savoury and salty, with a decent kick from fresh cracked black pepper. And you get to use your hands. Why use cutlery for your last meal, anyway?

It’s no surprise that this carby delight hails from Emilia-Romagna in Italy, a region better known for its Parmigiano Reggiano, Prosciutto di Parma and Mortadella Bologna. I’d be demanding all three of these delicacies as sides, too, if this was in fact my last meal on earth.

Having eaten this Nido dish on countless occasions since local culinary celebs Laura Sharrad (of Masterchef fame) and her chef husband Max took over The Pot site in Hyde Park, I was happy to see it land on the snacks menu of their second venue when it opened last year.

And here we are in the former (unrecognisable) Rigoni’s restaurant space on Leigh Street, now badged Fugazzi, seated at the best table in the house (we’re told) to discover what else they’ve been whipping up, aside from ricotta.

The Italian influence is everywhere, from marble-topped bars and tables, to the central banquette seating, curtained by velvet above to mimic the shape of a Bottega servery and, of course, it flows all the way through the Fugazzi menu, unashamedly, but for a few ingredients borrowed from other cuisines.

Yuzu is one of the foreigners, an on-trend Asian addition that seems to be popping up everywhere, especially in western dishes. Here it’s combined with a white balsamic into a mignonette drizzled over four Pacific oysters. These seem like they may have been shucked a while ago, but this is forgiven when the sweet, tangy and lightly bitter sauce hits my lips (I only eat oysters with yuzu now, thanks.) 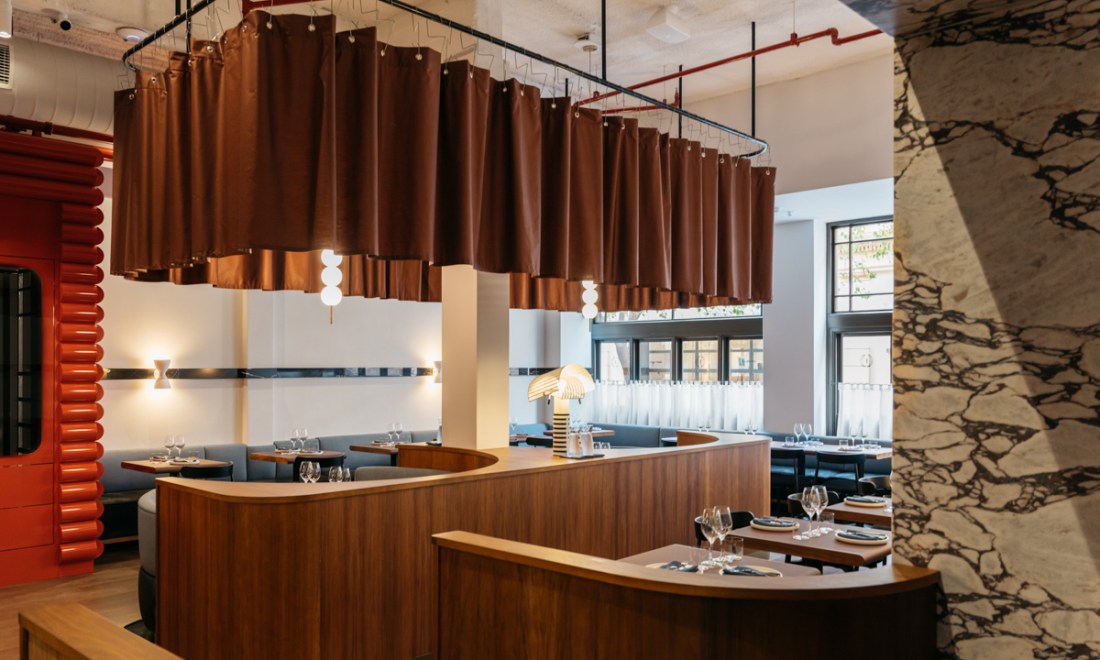 Fugazzi has heavily made over the old Rigoni’s space. Photo: Julian Cebo

Some artful plating comes into play with a salmon crudo that is beautifully presented, perhaps representing a miniature school of these Atlantic giants, swimming in formation across the dish. An herbaceous oil defies emulsion as it pools across a buttermilk base below the twisted slivers of fish. Finely diced and pickled zucchini has a buttery flavour with a delicate crunch that adds only the slightest texture to each bite. Fresh dill sprigs providing their grassy, zingy flavour and lightly toasted sesame seeds offer a hit of umami and smoke – but it’s the combined flavours of all ingredients together that really sets this crudo apart from many others before it. 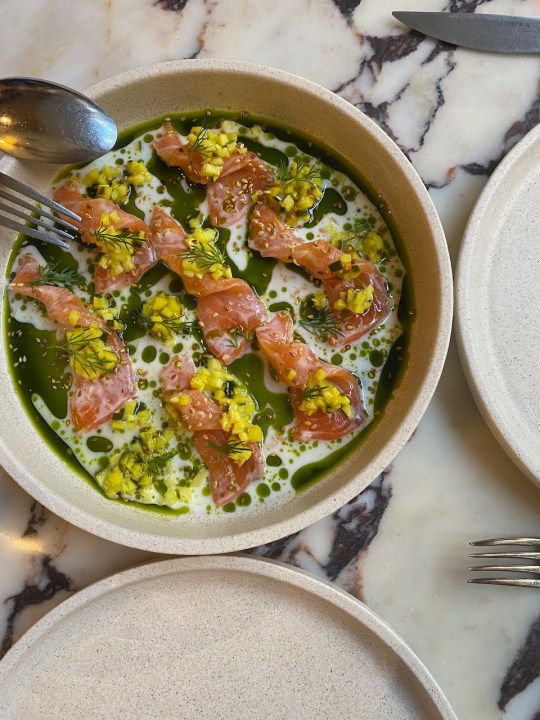 The inspiration for the next bite comes from a strange place: the cupboard just above the toaster. Listed as “Roman Vegemite”, these are soldiers of buttered toast topped with anchovy and tiny segments of lemon. The connection is made when you bite into them – that familiar salty, malty and yeasty taste is close enough to the original that you forget you’re eating fish.

Traditionally made as a chop to be eaten with your fingers, lamb “scottadito” are served instead as skewers of layered backstrap. Cooked to a nice char on the outside while still pink and juicy in the centre, these are petite powerhouses, packed with so much flavour and a good whack of spice thanks to a chilli-infused sauce poured on top. We wish we’d ordered more. But with pasta arriving next and the pasta queen of TV in the house – albeit heading the service teams of Fugazzi and Nido these days – there’s no time to wait. 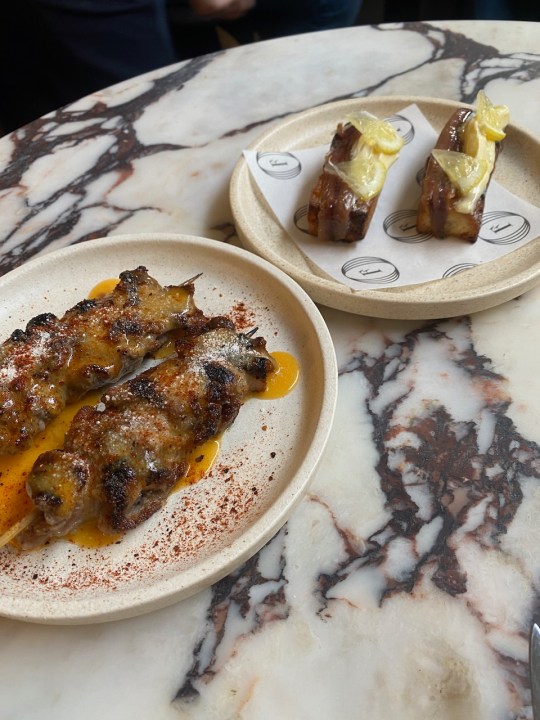 Duck and mortadella has been minced and stuffed into crescent-shaped pasta, made by someone who definitely knows their dough (or may have been schooled by Sharrad herself). The robust pillows are al dente with a perfectly silky exterior, and the filling is tender and flavoursome. But it’s the sticky, viscous duck and black vinegar sauce that is the real hero here: outrageously so. 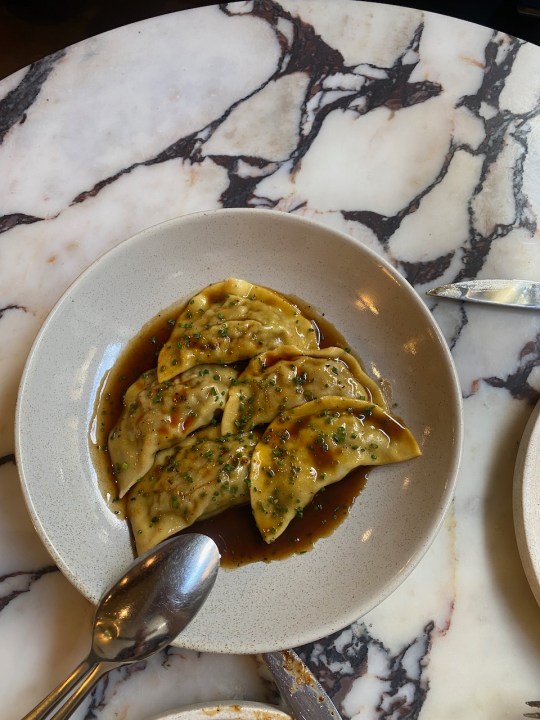 Lastly, Fugazzi’s spatchcock might appear to be a fairly typical baby roast chook, but we dig deeper to discover so much more. I can’t recall ever referring to a dissected poultry dish as elegant, but here we are. Crispy skinned segments of succulent bird shimmer in their own juices beneath scattered curry leaves, fried until light and crisp. Hiding further below is a sweetcorn puree that is more of a sauce: this has a punchy flavour underwritten by the lightest hint of curry and a defined sweet and salty balance. It’s another seemingly simple dish, presented in an imaginative way with a beautiful flavour combination that will be hard to forget. 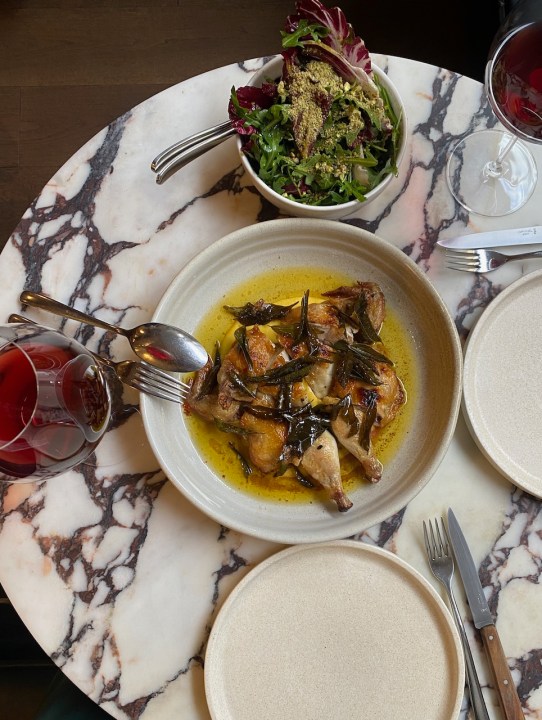 This is a kitchen that’s creative and innovative while remaining authentic to typically humble Italian ingredients and dishes. After today, I’ll be adding a serve of that sweetcorn sauce to my last supper, poured right over gnocco fritto.