When it comes to connecting place and produce, there would be very few duets as instant and resonant as Port Lincoln and seafood – mussels, tuna for starters, and for the sake of a bit of tourist excitement, let’s chuck an occasional shark or two into the mix.

You would be more hard pressed to find wide recognition that Port Lincoln has something going for it in terms of grape growing and viticulture. And yet it has garnered a fair reputation for its Riesling and Sauvignon Blanc through better-known producers Boston Bay Wines and, more recently, Peter Teakle Wines.

Vines have been busy in the ground in both places since 1984, and the whites clearly have an emotional link at least with the glorious bounty of the bay and ocean nearby.

While Boston Bay Wines is still having its wines made in Clare at O’Leary Walker, with its favourite Riesling new vintage soon to be bottled, the major action has shifted now to the top of the hill above the township. There, former Collotype Labels owner and entrepreneur Peter Teakle has been busily investing in the former Dellacolline Estate property since 2016, creating an impressive modern winery, cellar door and restaurant facility that not only is a major tourist attraction but also is setting new standards in viticulture and winemaking in the region.

Teakle is one of those folks who has a dream and knows how to achieve it. When he bought the property there were six hectares of vines; now there are 11, and he’s bought 40 more for further plantings, expanding a traditional mix of Riesling, Chardonnay, Semillon, Shiraz, Cabernet Sauvignon and Merlot with Fiano and Pinot Noir.

He sees it this way: “Kerry Packer loved his polo. Wolf Blass loved his horses. Bob Oatley loved his sailing. I love this [pointing out to his vineyard].”

Teakle admits he’s over-capitalised for the moment – with new irrigation systems, new spraying technology, revitalised vineyard trellising, the shiny new winery that can handle many more times the volume than currently produced, and within it presses, crushers and engineering almost entirely manufactured in South Australia.

“But it’s my hobby,” he says. “You’ll find all sorts of equipment here that you can’t justify – but I can.”

Teakle is also a weather nut, and has crunched the numbers to reveal that Port Lincoln is, in his eyes, the coolest wine-growing area in South Australia. Winds are the greatest enemy during ripening, but the north-easterlies coming across Boston Bay are significantly ocean-cooled. At 150 metres above sea level, the temperatures drop even further.

“If you look at the hottest month of the year, which is February, you’ll find Port Lincoln’s average maximum is cooler than in the Adelaide Hills or Clare,” Teakle points out.

It all sounds very promising – except for one important factor, he adds.

“The opportunity to produce really good grapes for winemaking has not been developed in this part of the world.

The lack of it. Underground and rainfall.

He recalls his friend Andrew Pike, who helped him rework the vineyard, told him that when he worked for Penfolds they defined the area as one of the best places to grow grapes in Australia, but didn’t go ahead because of the lack of water.

Interestingly, Penfolds has stayed in touch with the Port Lincoln district, and has included Shiraz fruit from the Turvey family vineyard in the Green Patch district west of North Shields in its prized Penfolds St Henri Shiraz. A telling endorsement in anyone’s language.

Teakle has risen to the water challenge by building 1.3 million litres of storage, as well as extending a  mains pipeline to the property.

“With the new technology, we are able to use a litre of water much better than we used to,” he says.

His dream winery, and with that the cellar door and exciting Line & Label restaurant, were the obvious next steps, designed by partners and winemakers David O’Leary and Liz Heidenreich. She then signed on as Teakle’s winemaker, finishing the production facilities the day before the first fruit arrived for the 2020 vintage. 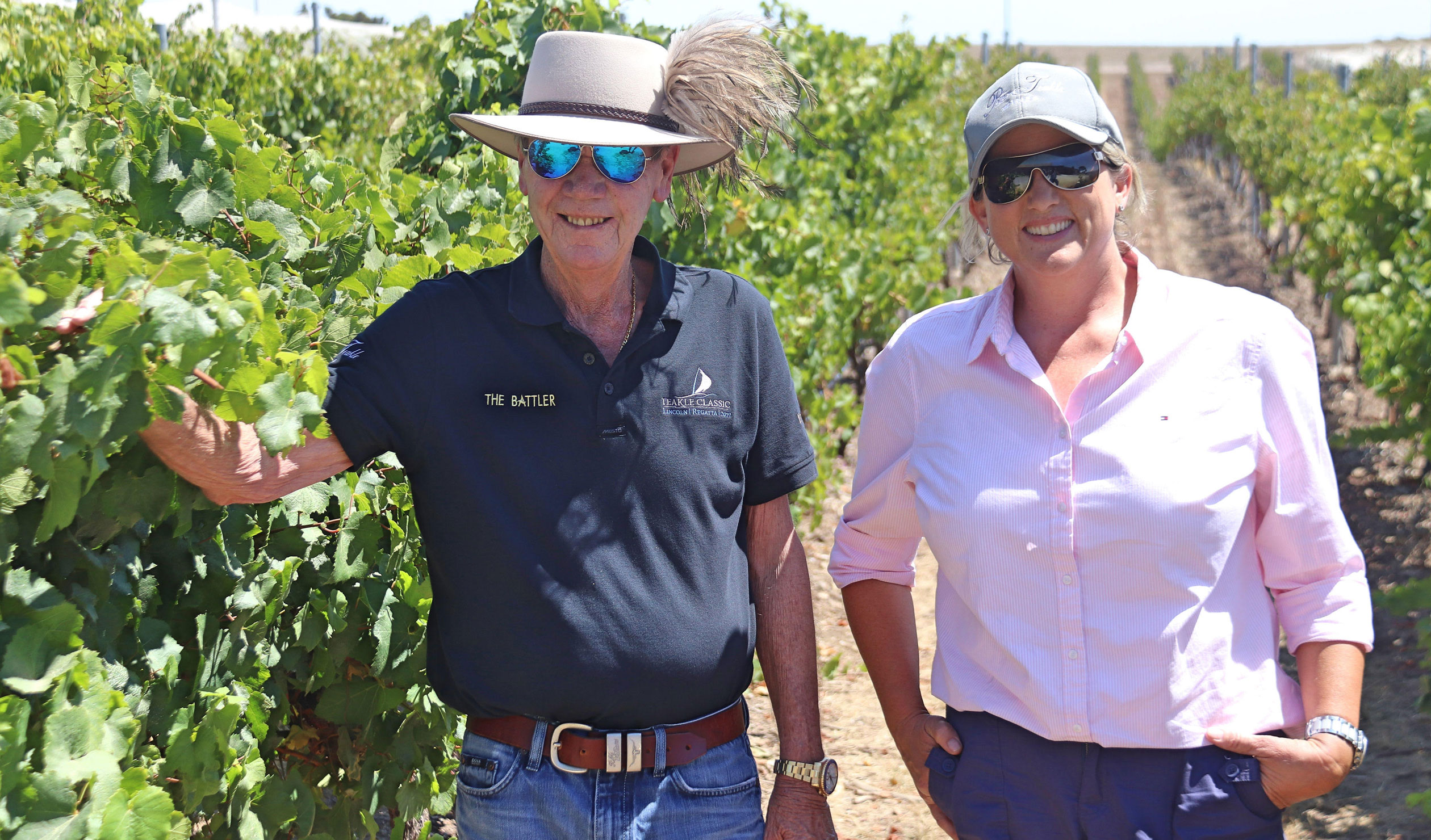 Learning about the region has led Heidenreich to some newly implanted but firm beliefs.

“It’s not a place that people think about as a region for wine, but apart from the lack of water, there’s no obvious reason why not,” she says, noting the rich soils of the area, and the cool Mediterranean climate.

“It never gets searingly hot here, and we get good sunshine hours, long sunny days and then a gentle breeze – sometimes not so gentle – which keeps disease to a minimum. There’s little humidity, a cool dry heat in the summer, with cool nights.

“That’s why Riesling is really good out of Lincoln. It’s not too different to the diurnal difference in temperatures in Clare.

“It’s cooler in summer and warmer in winter than Clare. It just seems much more even all year round. In the past few years I’ve noticed that it’s much more moderate.”

Taking all that into account, Heidenreich’s winemaking instincts have reacted and begun to direct the Teakle portfolio of wines towards a more regionally appropriate style. The Riesling thrives here and needs little interference. Her own Heidenreich brand from Clare, and her experience as Sevenhill winemaker, informs much of how that variety will be Port Lincoln’s undisputed champion.

The Chardonnay is already showing more sophisticated contemporary styling, including barrel ferment and lees involvement. And the Shiraz is finding more savoury notes and elegance, with the inclusion of 20 to 30 per cent whole-bunch fruit in the ferments.

“I do think that the cooler climate brings a bit more elegance to the wines, with lower alcohols, the grapes becoming flavour and physiologically ripe without really high sugar levels. 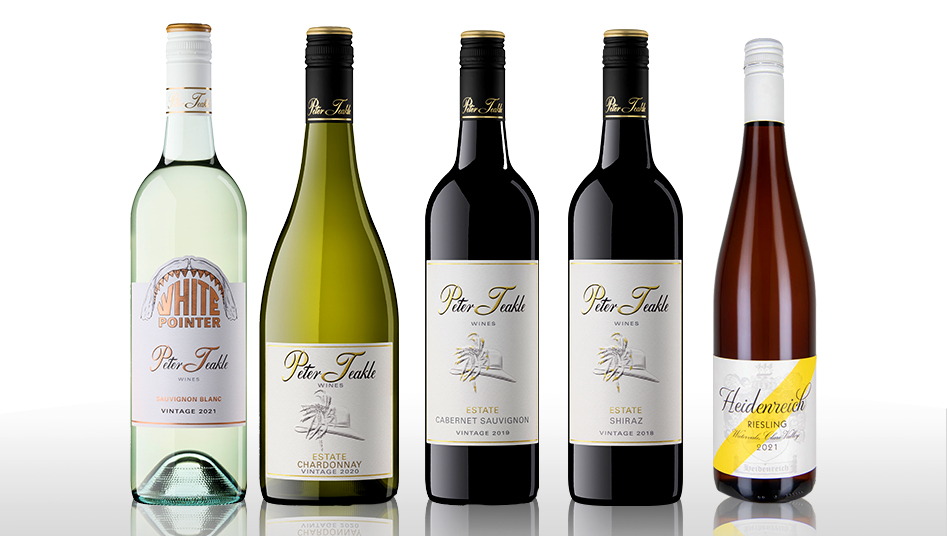 The naming of this wine will probably create fans as well as skeptics, but there’s no denying it’s a wham-bam Savvy from the get-go. Aromatically. it’s all about tropical fruit salad with plenty of freshly squeezed lime – to the nose and palate. The big up here then is its texture and mouthfeel: while its flavours taper with gentle manners, a salivating chalkiness runs full line and length, offering a distinctive character to the total expression and well worth keeping an eye on as a terroir/winemaking harmonic.

Harvested and vinified in the first vintage the Teakle winery was in operation and winemaker Liz Heidenreich was able to begin directing the fruit and wine to her ambition. What we see here is a Chardonnay mid-style evolution, showing pear, grapefruit and subtle honeydew melon flavours with a modern approach to oak maturation, an element of barrel ferment and lees characters showing; evident is a delicate gingery palate spice note. There’s definitely something going on here and it’s a wine to watch as it settles even more into its cooler-climate direction.

Current vintage, yet still indicative of a more traditional style that carries a fair deal of sweeter oak notes in the first impressions. The fruit spectrum that lies in wait is rich in dark berries, classic blackcurrant and dark chocolate, though not without savoury suggestions, such as bay leaf and black olive. Barrel maturation has settled everything into a very even stream of Cabernet flavours and soft tannin mouthfeels. Again, watch this space as the style evolves to bring on more varietal impact.

The Shiraz also comes from an earlier era before the Teakle winery, improvements in viticulture, and a new generation of winemaking came on board – it’s clearly made in the big rich Shiraz ways with a full coating of oak to go on with. That said, in its genre it is a terrific example, the swelling of ripe plummy Shiraz something to behold. Will be much loved by South Aussie Shiraz traditionalists.

In lieu of the Peter Teakle 2021 Riesling (sold out and unavailable for tasting), this is winemaker Liz Heidenreich’s own small brand crafted from a single vineyard in the Watervale sub-region of the Clare Valley. Its lavender/floral aromas are very attractive to begin, with a varietal citrus spectrum sitting between lemon and yellow grapefruit, flesh, juice and rind. Superbly balanced, moderated yet persistent acidity, fine minerally mouthfeel – it’s everything a delicious Clare Riesling offers as a youthful delight and most likely for another five to eight years as it develops toastier characters. If this is her Riesling blueprint, stand by for the Teakle 2022 iteration – Heidenreich is a big believer that Port Lincoln can make this variety its great white champion.