Say the word “Barossa” and without doubt the first recognition is all about the reds. Mostly big, bold, silky Shiraz – its number one wine attraction here and around the world.

Alongside Shiraz rolls its oft-blended partners in Grenache and Mataro (aka Mourvedre). Of course, there are other traditional varieties such as Cabernet Sauvignon, Merlot and Malbec, while Italian and Spanish origin vines such as Tempranillo and Sangiovese come into play among an emerging generation of winemakers.

However, the noise is mostly about those with a spiritual home in the Rhône Valley in southeast France: the G, S and Ms, along with a few lesser-known varieties from the same area.

But what of white wine in the Barossa? Let’s first clear up a little detail. There is no question that Riesling is the number one star, and that’s connected mostly to the Eden Valley, which falls within the official Barossa Zone but actually is its own defined region. So, let’s put Eden Valley Riesling aside for the moment – it needs little further introduction.

So what is happening on the white wine front in the greater Barossa area? Traditionally the Valley floor has celebrated Semillon as its signature regional white variety and, while it is loved, much like an adorable family matriarch, the grape is dwindling in popularity and great swathes of it have been ripped out and replanted to the more valued Shiraz. Much the shame. At its best, the Peter Lehmann Wines Margaret Semillon is deservedly revered. Similarly, the Willows Semillon is admired and greatly respected. And there is a new generation of Barossa growers and winemakers trying their best to keep the tradition alive. All power to them.

However, another story has slowly unfolded over the past 40 years, and along with it there is a burgeoning recognition that perhaps the Barossa’s more likely white wine style sits in tandem with the reds of the Rhône Valley. Among the whites that have come all this distance from the same French appellations, the leading player is the Viognier variety, championed for all its history here by Angaston-based Yalumba. Its sidekicks are mostly Marsanne and Roussanne, which make up the majority of what are, in essence, white Rhône-style blends.

In the past few years there’s also been a real buzz about Grenache Blanc, a mutation of red Grenache that has only been accessible in Australia since 2010 and has attracted several Barossa producers to grow and begin production in the past few years.

Viognier, though, is very much a story of faith and persistence, which suits the Barossa’s greater narrative down to the ground. It came to Australia in 1968, was cultivated by Yalumba’s own nursery program and planted first in 1980 – just three acres – in a grower’s vineyard in Eden Valley. Yalumba now has 16 different parcels of fruit in that region as well as great sources including the Riverland and Wrattonbully, and growers in the Adelaide Hills and Adelaide Plains.

Other producers also have seen the variety’s worth, with notable varietal wines from Tim Smith, and blends from Langmeil (Three Gardens), John Duval (Plexus), and Turkey Flat (Barossa Valley White), to name just a few.

“It is pertinent sometimes to reflect on where we have come from with Viognier in the relatively short period of 40 years,” Rose says.

“It has been an exciting relationship as we have fallen in and, occasionally, albeit temporarily, out of love with the variety.

“We continue to learn as our vines get older and we get wiser (about growing and making it). We have watched the Yalumba family and friends go through the same journey of discovery as the wines have made their way to hearts and minds all over the world.”

One of the biggest hurdles outside of the vineyard and winery evolution has been the willingness of consumers to take to it, mainly because many find “Viognier” challenging, and even embarrassing, to pronounce. For the record: “Vee-on-ya (or) yay” is a pretty good start.

Getting drinkers past that point in cellar doors, retailers and restaurants then involves a first taste, that can be quite a full body experience. In Yalumba’s own playbook they describe it thus: “Within a glass of Viognier can be found layers of flavours. When great, the wines are seductive, luscious, opulent, viscous, full-flavoured with exotic aromas of lychee, musk, rose, pear, apricot, peach, nectarine, ginger spice, citrus blossoms and long silky rich textures.”

James Lindner at Langmeil believes Rhône whites are a good fit for the Barossa.

The texture, in some writers’ hands can be described as unctuous, and even oily. This is another challenge for some. Tim Smith says you have to have some of this for it to be truly in the Viognier zone. Some, but not too much. In the winemaking, he says, you have to put the handbrake on both with the textural weight as well as the variety’s natural capacity to express what he calls “apricots on steroids”.

“Viognier sits, in terms of weight, somewhere between Barossa Semillon and a fuller bodied, cool-climate Chardonnay,” he notes. Finding acidity in the harvesting regime is key. As an aside, he is putting together a blend this year mostly of Viognier and most likely Riesling, and perhaps another variety in there too, that could perhaps morph into a unique Barossa white style.

He, among others, is also excited by the arrival of Grenache Blanc in the region to bolster the momentum of the Rhône white varieties.

“All these new white Rhône whites are actually very suited to the Barossa Valley rather than the Eden Valley,” he says. “Grenache Blanc, Grenache Gris, Clairette – they don’t mind a warmer climate.”

“And if you look at the progressive makers here, they are all playing with these white varieties. They all have young plantings and are working on it now.”

James Lindner, at Langmeil, also sees a bright future unfolding for these companion varieties. Langmeil have only been producing their Three Gardens white blend of Viognier, Marsanne and Roussanne for five years, sourced from four sub-districts in the Barossa, their latest iteration also including a small dollop of Rhône companion Clairette.

“The good thing is we are seeing more people around the Barossa planting them, which is a good sign that growers are starting to adopt them, plant them and believe in them,” Lindner says.

“We are seeing more people planting Grenache Blanc as well, people looking at the areas where we have succeeded in red varieties now encouraging certain white varieties.

“Most people when they think Barossa, they think red wine, and this is a story that is changing that. Of course, Eden Valley Riesling sticks out there, and Semillon traditionally, but in terms of the future, these varieties can work in this climate. This is a good path forward for us.”

Both he and Louisa Rose are also convinced that Viognier, and its Rhône-ish partners, are at their very best when accompanying food, their particular weight, texture and spice notes working well beside just about every cuisine and dish imaginable, from eggs at breakfast, to pasta carbonara, to fatty foods like pork belly and seafood dishes like scallop and chorizo, dishes with chilli, and to curries. Unsurprisingly, degustation menus also suit the variety perfectly.

Does it stack up as the Barossa’s own signature white wine style of the future, however? Are we seeing a passing of the baton from Semillon? Or simply a welcome to the region?

“Certainly, there seems to be more going on, and there is quite a move (towards the white Rhône varieties) – it’s really exciting.

“White has lost its way in the Barossa in a sense, particularly with so much focus on the reds, and taking Riesling out of that conversation, it’s nice to see there are people working with the (new) whites.

“They’ll be young vineyards and it will be exciting to see what they can produce.” 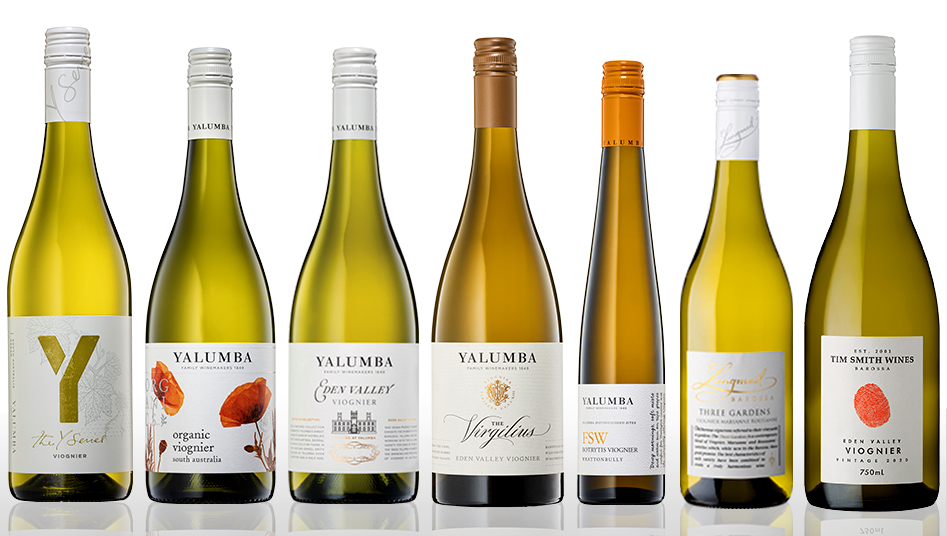 Sourced from the regions other than Eden Valley where Yalumba gather their Viognier fruit – the Riverland, Wrattonbully, Adelaide Hills and Barossa Valley floor. Starting with a varietal floral headiness with a subtle sea-shells note as well, this has a bright and tangy palate that offers crazy value white wine with genuine character. As with all Yalumba’s Viognier options, it’s 100% wild ferment.

Sourced from much loved Riverland growers for Yalumba, Tony and Pam Barich at Whistling Kite Wines vineyard, who are beacons in the organic/biodynamic and alternative variety fields, this starts with an enticing floral note, honeysuckle sweetish in the aromatics followed by mandarin peel and definite apricot nectar with a decent sway of peppery spice in the medium to richer palate lines that the variety naturally offers.

Chief winemaker Louisa Rose calls the EV iteration the “essence of Yalumba Viognier”. This and the following Virgilius are matured in older oak barrels, following the house-style, full wild fermentation of fruit from six Eden Valley vineyards. This is definitely a study in varietal expression with white orchard flowers, stone fruits (white peach and apricot) and a delicate mint note as well. Some lees character begins to show in the textures – a little chalkiness layering the classic rich palate feels. And again, it has a trademark finish of ginger and peppery spice. Delicious.

Yalumba’s top-shelf expression is a best barrel selection from all the Eden Valley fruit across the whole Viognier program, so there is a delicate maturing influence built into the palate, almost an almond cream like sense along with a well-tempered concentration of stone fruits, helping in the richness of the varietal feels, while the spice elements gravitate towards a subtle gastronomic bitterness in the finish. A complex nose to tail wine, intelligent and a multi layered delight.

All the regional climatic and vineyard elements in Yalumba’s Wrattonbully blocks come together for this quite refined Botrytis style. Honeyed and cumquat marmalade aromatics and flavours are harmoniously followed by deft sweetness and again the ginger spice of the variety comes across in a biscuity note. As winemaker Louisa Rose suggests, there isn’t a cheese under the sun that won’t go well here. Or just take a sip as a mini-dessert treat on its own.

A Barossan interpretation of classic Rhone Valley white wine blends, and actually there’s a fourth variety that originates from that region, Clairette, in here as well. Orchard florals lift exuberantly out of the glass, sweet smells and ripe stone fruits with baking spices throughout – cinnamon, powdered ginger, white pepper seasoning the palate and adding layers of richness. Don’t try to dissect the individual components, rather enjoy this as a finished jigsaw that, as the Lindner family suggests, is all about taking its rightful place at the table from Mediterranean to spicy Asian cuisines.

Stone fruits – nectarine mostly and not too outward in the apricot department – and quite floral in the palate aromatics as well. Winemaker Tim Smith points out that the wine’s good acidity is courtesy of a cooler than average vintage, and this counterpoints this Viognier’s varietal richer mouthfeel. The spice in the finish is worth noting, too: white pepperish, seasoning the flavour retention with some command. Very smart styling here.