As destinations go, Kangaroo Island has plenty going for it.

We get to go overseas, at least, all 16km of it on a sometimes wild ferry journey from the southern tip of the Fleurieu Peninsula over the romantically named Backstairs Passage strait to Penneshaw and beyond.

In a harking back to the old “journey or the destination” debate, that “sometimes wild” crossing becomes a defining mantra for many a KI experience. Nature is everywhere. Landscapes. Wildlife. Southern Ocean shores and horizons. On and on.

The locals live it every day. Visitors seek out the highlights and, with that, they desire another defining South Australian tourist experience: exciting food and wine.

On Kangaroo Island that comes mostly as tourist offerings from small family operations and artisan producers. Under that surface, there’s serious primary industry pumping away.

Yale Norris, one of the passionate business partners behind The Islander Estate Vineyards, sees the layered economy very clearly.

“Everyone knows KI as a tourist destination, but a vast majority of this island’s economy is driven by agriculture – not just sheep and cattle, but broadacre cropping, and horticulture,” he says.

“So, if we look at that from an agricultural perspective, viticulture sits into that really well.

The Islander Estate business is one of the best-known wine businesses on the island, set up in 2000 by an international flying winemaker, Frenchman Jacques Lurton. He loved the place so much when he first visited that he established vineyards in the centre of the island to grow a fair smattering of varieties that reminded him of his birthplace in Bordeaux: among them Cabernet Sauvignon, Cabernet Franc, Malbec and Semillon, along with Shiraz, Grenache, Sangiovese and Viognier.

Unfortunately, the vines were severely burned during the island’s devastating and deadly January 2020 bushfire. After a loss of two vintages from the estate, a good percentage has been rejuvenated through intense nurturing by Norris and crew.

It’s important to note the focus on the Cabernet family and its varietal friends, as they have long been seen as offering the best chance of being the island’s grape and wine signatures. The logic comes from a winemaker out of a maritime region in the northern hemisphere planting himself and these vines at the other end of the globe, in what has to be one of the southern hemisphere’s most obvious ocean impacted wine-growing districts.

Now let’s move to the eastern sector of the island, where Julie and Jamie Helyar’s False Cape Vineyards on the banks of the Willson River on the Dudley Peninsula between Penneshaw and Cape Willoughby, grow a range of varieties for their own False Cape brand. False Cape is also the source for several other island-based winemakers, including Yale Norris at IEV who considers their fruit of such high quality he’s looking for long term supply rather than replanting the Cabernet Sauvignon and Shiraz lost to the flames two years ago.

Once again it’s the Cabernet that makes its case on the eastern end of the island as much as in the centre. While another family producer, Dudley Estate, has been a tourist attraction in those parts for many years, at False Cape vineyards the interest ramps up as there is a lot of limestone in terra rossa soils – that magic combo also found in the revered Coonawarra strip and also in parts of the Clare Valley where Cabernet shines.

The Helyars were convinced of the variety’s strengths after establishing their vineyards in 1999. Just five years on, in reviewing one of their earliest releases, the 2014 Cabernet Sauvignon, they stated: “Cabernet Sauvignon seems to thrive on Kangaroo Island and at this early stage of vineyard development appears to be the superior variety for the Island. The slow, even ripening influenced by the cooling sea breezes coupled with terra rossa soils produces wines of great character but also some finesse. “ 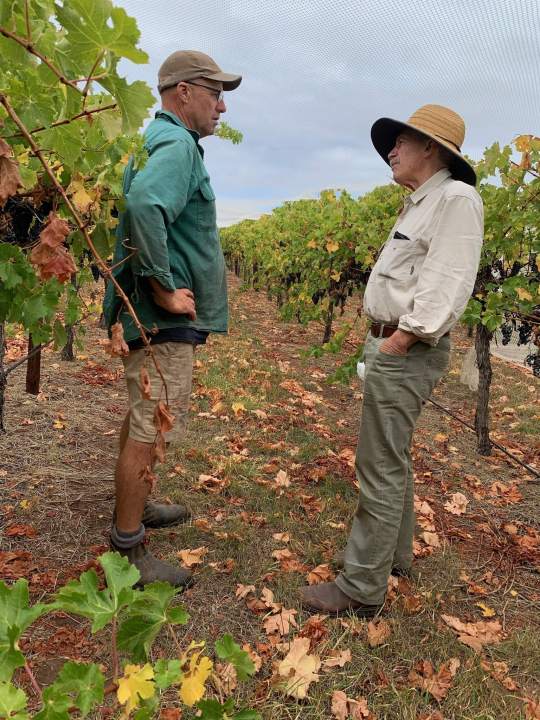 Much has been learned since then with the employment of sustainable, dry grown vineyard practices like free-range turkeys for pest control, sheep in winter for weed management and soil biodiversity, and low yield harvesting. Their fruit is shipped to the mainland region of Langhorne Creek where family member Greg Follett makes the wines at his Lake Breeze home.

False Cape also has attracted the attention of new group of winemakers going by the name of Guroo Wines. The project, organised by winemaking couple Nick and Rebecca Dugmore, introduces noted mainland winemakers to Kangaroo Island vineyard fruit and has them make wines for three years to raise awareness of the relatively young region’s vinous assets.

The first Guroo winemaker was Young Gun of the Year Charlotte Hardy, from Charlotte Dalton Wines, with a Syrah. Next in line is the renowned Pinot Noir master Stephen George of Ashton Hills fame, who also has a lesser-known though equally revered role in the extraordinary legacy of Wendouree in the Clare Valley. While he had originally planned to work with KI Pinot, a series of hurdles diverted him to take on Cabernet Sauvignon, a variety he was well aware of from his work in both the Adelaide Hills and in Clare.

And that KI Cabernet comes from the False Cape Vineyards. It will be bottled in March and released at the end of April at a Tasting Australia event. Without taking anything away from other delicious KI Cabernets and blends, the Guroo 2021 Cabernet sauvignon is a triumph of what the variety can achieve on the island.

(As a quick aside, the third in line Guroo winemaker is Coonawarra-based Sue Bell from Bellwether Wines. She’s taking on Chardonnay from the Bay of Shoals Vineyard on the coast close to Kingscote.)

Nearby, within a 10-20 kilometre range from the island’s main town, there is more Cabernet action of note. Bay of Shoals has its own version, while The Stoke Wines, the core brand from the Dugmores, produces several varieties including Syrah (Shiraz) and a Cabernet Franc that begins to show a new-generational approach to winemaking in the district. The Stoke Wines come from a four-hectare vineyard near Stokes Bay on the north coast. 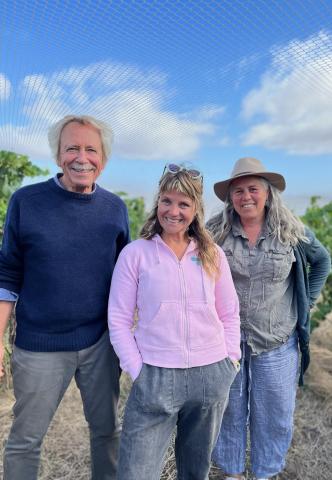 Also nearby is Springs Road Wines, the island outpost of McLaren Vale0based Battle of Bosworth duo Joch Bosworth and Louise Hemsley-Smith, who took over one of the region’s pioneer vineyards planted in 1994. These are now managed organically with blocks of Chardonnay, Shiraz and Cabernet Sauvignon, the blends of the two reds very much stating a case for this classic combination as another key island trademark.

It makes sense that winemakers from the Fleurieu zone look to the island for fruit that is complementary to their own, be it from McLaren Vale or Langhorne Creek. Maxwell Wines, from the former, also makes a Shiraz out of their own KI vineyard – another iteration worth noting.

It’s early days yet for consumer awareness of the Island’s wines, beyond the tourist experience, as well as wine knowledge on the ground. What the winemakers based there know is that rainfall is critical and variable, lessening significantly from west to east. Different soils and geology play a huge part as well. The island’s weather patterns are very much a joy to everyone growing grapes in the region.

“The reality is, if you look at our climate zone for the most part, we have nearly ideal growing conditions for fruit here.”

When it comes to the wines, and specifically the island’s Cabernets and blends, it might still be too early or too diverse a region to pinpoint signature characters, Nick Dugmore suggests.

“I’m just happy that the wines are varietal,” Dugmore says. “The region is so young, but if you pick the wines as Cabernet then you’re on the right track. It means where it’s being grown it is doing well.”

For Stephen George, as he embarks on his Guroo KI Cabernet project, the big question to be answered is: “Does it taste like Kangaroo Island Cabernet, across vintages and across the several sites?”

The answer to that is part of the journey, and perhaps a winemaking “destination” as well. 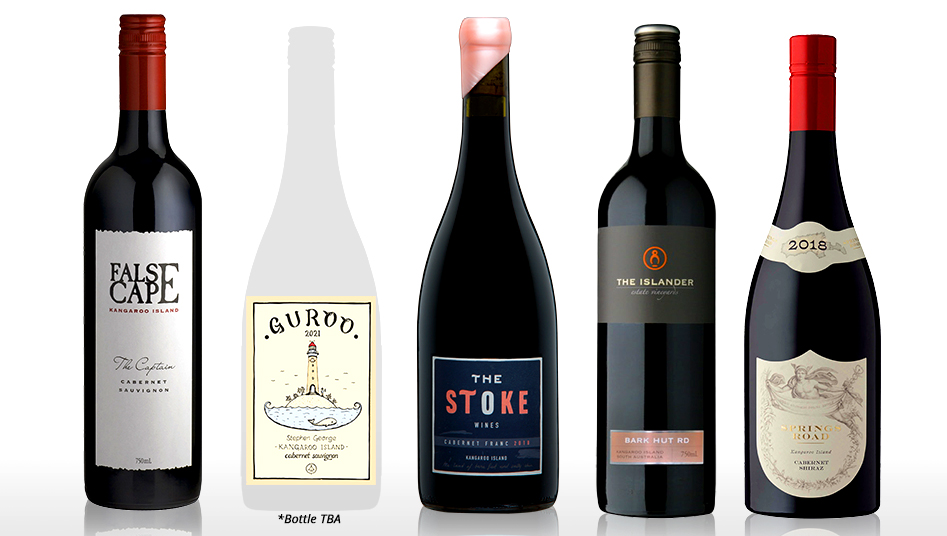 This week’s wine reviews: the Guroo cab sav is yet to be bottled.

Fine dusty notes in the forecourt here – an often typical introductory sense, with also some mint/eucalypt in the air. Plenty of Cabernet fruit character, fleshy feels in the palate layered with fine tannins and a little oak-derived vanilla in the finishing. Totally varietal with a classic winemaking approach.

From the same vineyard source as the False Cape, though the winemaking aimed to reduce tannin impacts. A beautiful crimson rim to the colour, before an engaging deep dark berry aroma draws you in, the fruit flavour spectrum reverbing the purple, floral aromatics. Lovely fleshy feels, textural with fine tannins arriving at the perfect time in the palate lineup, finishing with tea leaf characters, long and persistent. A superb expression. To be released in April at a Tasting Australia event to be finalised.

Once again there’s a potential KI marker in a familial varietal dustiness to start, grounding the aromatics. This wine is a more contemporary style with wild ferment and 10% whole bunch included, which shows a touch in the palate along with a distinctive amaro/orange peel spice-like note and an exciting energetic textural feel in the palate. Stephen George calls this one a “funky” wine because of its bagloads of aroma and flavour. (Sold out but just six bottles left via the producer – there was no 2021 made.)

The Islander produce four Cabernet and blend varietals, Sauvignon and Franc separately, as well as 50/50 combinations with Shiraz of those two. They are all remarkably individual, with the blends offering a lovely drinkability. This specific variation, with the Cab Franc having spent six weeks on skins, begins with vibrant aromatics, crimson-berried and spicy in a Middle Eastern spectrum. Juicy, lip-smacking flavours abound with mocha-like depths and wonderfully integrated tannins, soft and supple to the end. Bloody delicious, in short.

One of a range of Cabernet and Shiraz and blends thereof, I’ve reviewed/tasted this wine several times over 12 months and it still rates highly every time. The aroma is Cabernet-dominant while the fruit is bright and crunchy as you sip, providing great juiciness and flesh to thrill the palate as well as a peppery spice that has developed over time. Neatly defined styling with lovely lip-smack and chewiness in the finish, fine and persistent then in the denouement.