There are plenty of attractions when you get to Port Elliot on South Australia’s holiday south coast.

Horseshoe Bay swimming beach heads the list, then the town’s old buildings (featured in the films like Storm Boy), the bakery with its mad lines outside and crazy doughnuts inside, the caravan park by the beach, the shoreline and breathtaking rocky walks, body-boarding off the point at Boomer Beach, the new Clubbies kiosk at Port Elliot surf club, the wonderful South Seas Books and Trading shop, and up towards the hills at the converted Factory 9 industrial estate, De Groots coffee, art and design spaces, Harborganics pizzeria, and a gorgeous little winery/cellar door called The Joinery, a venture by ever-welcoming partners Charlotte Hardy (Charlotte Dalton Wines) and Ben Cooke (Cooke Brothers Wines).

The fact that Port Elliot has a winery and is an emerging wine district in its own right is very likely at the bottom of most visitors’ expectations.

That makes sense, as there are just a couple of vineyards hidden away in the foothills behind the township, and a few others also set in the rolling country behind the neighbouring surf village of Middleton.

The larger Geographic Indication wine zone is known as the Fleurieu, with Currency Creek to the east, its boundary at Port Elliot, then the Southern Fleurieu to the west including Parawa where Brian Croser has his renowned Tapanappa Foggy Hill Vineyard. In the hinterland of Currency Creek sit a few more vineyards and producers near the Finniss River and, at the eastern end,  Langhorne Creek.

The larger Fleurieu zone also includes Kangaroo Island and McLaren Vale, but for today, a trio of producers on the mainland south coast deserve their moment in the holiday sun.

The one thing that connects this lot is the Southern Ocean, and its effect on the vineyards and resulting wines.

We’re all pretty familiar with the influence of Lake Alexandrina’s sea breezes on the wines of the longer-established Langhorne Creek, cooling the vineyards there and providing a moderating effect in the ripening season. This means the best of the region’s wines are delightfully medium-bodied and expressive without the impact of over-heated fruit sugars that might be found in warmer areas.

That same ocean effects occur all along the south coast, reaching maximum impact at Parawa, where Croser chose to plant Pinot Noir in ultra-cool and wet maritime conditions.

The same variety comes to the fore at The Joinery, where a joint venture wine is just arriving at the cellar door, albeit in the tiniest of volumes. This is Ben Cooke and Charlotte Hardy’s collaboration with the Day family, which has a 0.6ha Pinot vineyard just 1500m up the hill from the Joinery cellar door. It’s simply called Port Elliot Pinot Noir. Who would have thought!

The Day family vineyard, planted 30 years ago, is one of several blocks in the area that have been a tad neglected in the past but, with new owners, are now being rejuvenated. Ben looks after it during pruning and, during the year, he’s helping to bring it back to full health. In this first 2020 release, the partners made just one barrel, while the follow-up 2021 vintage has produced more but won’t be available for some time yet.

Once again, the overriding environmental impact comes from the Southern Ocean, Ben says.

“The vineyard faces directly to the sea: the Bluff to one side of the view, the Coorong to the other,” he says. “The southerly winds can be an issue at flowering and with young shoots, but it keeps disease pressures down and dries out the vines after rain. Temperature-wise it’s pretty mild.”

A kilometre or so to the east lies another vineyard owned by businessman and wine enthusiast Anthony Catinari. Here, directly overlooking Fisherman’s Bay and Basham’s Beach, he has opted for two grape varieties connected to his Italian family heritage: Montepulciano and Fiano.

The conditions suit both varieties, which have coastal roots in their homeland, Anthony says.

“I did a bit of research on where they came from and they seemed perfect for the area. They can handle summer heat, and the ocean winds also are a big influence,” Anthony says.

“I call it ‘beach-front coolness’.”

The labels for his Il Cattivo wines are quirky and fun, echoing Anthony’s personality and excitement for making the wine. The wines are just coming into local pubs on the coast, while they already have hit several restaurant wine lists in Adelaide.

Other vineyards dot the shorelines of the lower Murray system in and around Currency Creek, providing fruit for big companies like Casella, but cellar door options are limited.  Shaw Family Vintners have a large range from the area and a cellar door at Currency Creek which is open only on weekends.

Another tourist-focused venture at Currency Creek, One Paddock Wines, has a cellar door with platters and is open Friday-Sunday, offering arguably one of the most hideous wine brand names you can imagine, Purging Ostrich, with labels reflecting the same. I’ll spare you further details, but each to his own. (Admission: I haven’t tasted these!)

Heading further north-east, and also away from the immediate view of travellers to the region, are a series of vineyards close to the Finniss River inland from the main Strathalbyn Road.

The original vineyard here was planted by Wirra Wirra and I understand it will soon be back in the McLaren Vale-based winery’s hands. Also close by are a couple of other growers, including the organically farmed Heath & Co and the well-established Salomon Estate, owned by renowned Austrian wine folks Bert and Gertrud Salomon, he being the seventh generation of a dynasty reaching back as far as 1792 connected to the Kremstal region west of Vienna on the Danube River where they produce fine Rieslings and Gruner Veltliners.

Both love red wines as well as Australia’s casual lifestyle. They found the right site to expand their horizons in the 1990s on the Finniss River, 12km from the shores of Lake Alexandrina and 120m above sea level. There, local winemaker and vineyard manager Simon White oversees a range of traditional red varieties along with small plots of Viognier and others.

As with other winemakers along the coast, the Southern Ocean breezes are a critical factor in this vineyard, preventing frost issues in spring, and levelling out winter and summer highs and lows.

“It has this amazing moderating effect – in summer it can be 45C at Strathalbyn and just 28C here,” White says.

“Between the elevation, the two bodies of water, lake and ocean, and the way the air draws up to us, there’s something very quirky about what happens here.

“We get a slightly longer and more even ripening period here than many other regions, which helps in getting a good balance of fruit and tannin ripeness,” he says. “We get softer, generous tannins and a richer roundness in the wines as a result – all the things you want and none of those you don’t want.”

The evidence can clearly be seen in the Salomon Estate range of traditional reds, one being an Australian Shiraz Cabernet style that carries the label name “Norwood”. Intriguingly, the history behind this is that one of Bert Salomon’s forefathers, Johann Nepomuk Hinterrocker, emigrated to Australia in 1866 and was the founding father of St Ignatius Church and College in the Adelaide parish of Norwood.

However, it’s perhaps in a couple of other Salomon Estate blends, as well as the other wines of the south coast, that we see just how influential the Southern Ocean can be in this most unexpected way. 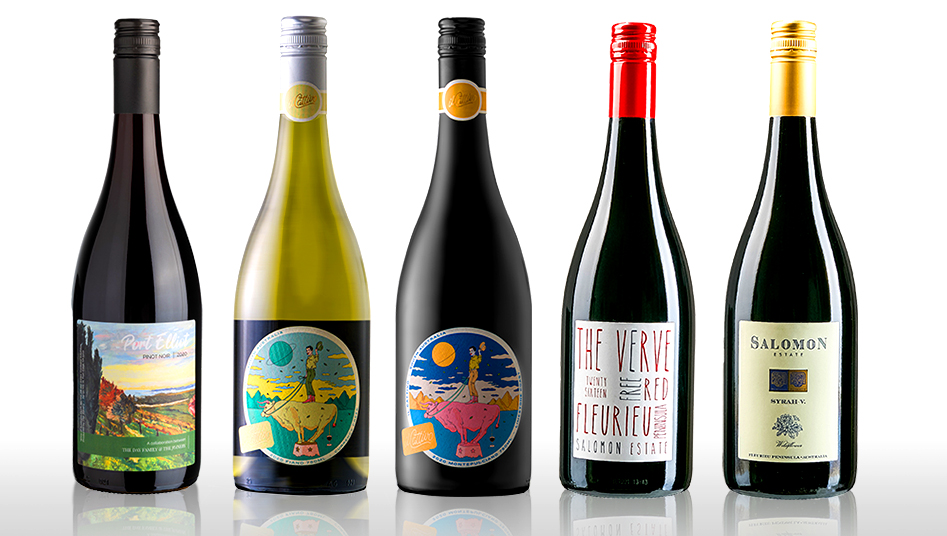 The Day Family and The Joinery Port Elliot 2020 Pinot Noir

Just one barrique (225l barrel) was made from this vintage, with a very limited quantity available from the end of January. With a 50/50 whole bunch/destemmed makeup, the result is a spicy, cherry cola note in the aromatics before the stalk component comes into play as you taste – bright and crunchy with neatly coaxed fruit acidity, mostly in cherry mode. Will suit fatty Chinese duck dishes. (The other wines at The Joinery cellar door from both Charlotte Dalton Wines and Cooke Brothers Wines come from the Adelaide Hills, Langhorne Creek, McLaren Vale and the Barossa.)

From Anthony Catinari’s vineyard within cooee of Fisherman’s Bay and Basham’s Beach. A quirky label promises fun drinking, which is exactly what eventuates. There’s an enticing country bakery, wheat-like aroma to start, the fruit somewhere between green apple and white nectarine, which dictates the flavour profile as well with perky acidity and lemon cream bun notes to finish. Get it cold. Grill a bag load of prawns.

As the regional sourcing indicates, this first vintage was a combo, while the 2021 vintage will be much more about the Port Elliot vineyard. The first thing to notice here is a vibrant, royal purple colour, then an immediate waft of freshly crushed berries and plums (blueberry and satsuma plum, to be more exact), plus a smattering of baking spices. The palate echoes all of the above, showing a layering of soft tannins across the mouth to keep the wine tight and ready for pasta, pizza and well-flavoured Italian sauces.

Made to emphasise minimal sulphur usage, this is a blend of 85% Mourvedre, 10% Shiraz and 5% Touriga, fermented traditionally, kept on skins for 42 days then older oak barrels for a year, the wine’s natural tannins protecting it before minimal sulphur additions at bottling. An exciting, medium-bodied expression with Mourvedre’s familiar earth and gamey spice to the fore, though with a pretty, native bush floral top note as well. As a single vineyard wine, we can see this as its stamp of “terroir”. In the tasting, there’s a neatly framed balance of flavour and texture with just the faintest of palate-teasing bitters to shape a genuinely delicious drink.

Firstly, let’s decode the label. The use of Syrah here rather than Shiraz refers to this wine’s inspiration from the red wine style of France’s northern Rhone region. The V refers to a 6% addition of Viognier, as in that style, giving the wine a totally different perspective via its aromatics of earth and bush florals – perhaps explaining the Wildflower referencing. The palate is set very much to a juicy feel; there’s a suggestion of stone fruits with the Viognier renowned to offer a subtle apricot note. It’s certainly the case here, with the wine’s distinctive sticky, lip-smacking tannin profile. Armed with these expectations, you’ll figure pretty smartly this doesn’t drink like a usual Aussie Shiraz, and all power to it for succeeding in that ambition.