Most of us have tried the good, the bad, and the ugly when it comes to Thai food.

I’ll never forget the worst Thai dish I’ve eaten: a stodgy plate of pad Thai served in the deep dark depths of a food court back in the days as a junior office worker before I entered the foodie realm. A pile of soggy noodles with an insipid sauce, days-old slivers of dry chicken and stale peanuts that threatened to break a tooth.

It wasn’t until I visited Bangkok a few years later that I recovered from that Tuesday lunch special. It was there that I paid around $3 for one of the most glorious meals of my culinary travels and was introduced to the magic of street vendor cooking. I ate non-stop for days on that trip, throwing my resounding fear of incorrect food-hygiene practice rules out the window and devouring every dish that I could get my greedy hands on.

Of course, there were hits and a few near misses, but most importantly there was an explosion of different flavours, and a new street vendor to barter with around every ramshackle corner. That trip taught me to never benchmark a cuisine based on one bad experience.

When I first ate at the original Soi 38 back in 2019 I’d garnered a whole lot more Thai cuisine experience under my slightly expanded belt. I remember some simple yet utterly delicious chive cakes in an unctuous sweet and savoury sauce, and spicy sago peanut dumplings in a coconut cream that showed how flavour and balance can be achieved with only a few meagre ingredients. That was also the day I tried chef Terry Intarakhamhaeng’s signature beef cheek massaman curry, which I still count as one of my favourite curry dishes of all time, with its star anise and cinnamon-infused flavour seeped into tender chunks of meat and potato. It was the ultimate dish that proved ugly could also be delicious. 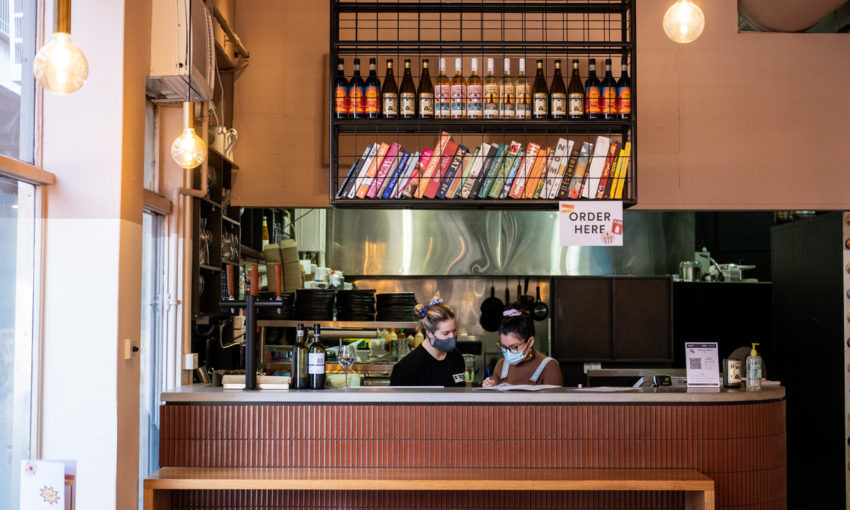 When Soi announced its planned relocation to a larger and more refined venue some months ago, it surprised its devoted patrons with a bonus – that the current Pulteney Street eatery would be retained and stripped back to become Fire by Soi 38. The idea was to focus on street food with some more casual adaptations of its classic, crowd-pleasing favourites. This still includes that massaman curry but at Fire, you can expect it served with fries.

The feeling in the reimagined venue on Pulteney Street is familiar, but with some changes. They have stripped back the interior to a point where it seems fairly basic. Table, chairs and a few lightbox signs along one wall have replaced a space that formerly felt quite warm. But that’s the point about Fire: no frills, no bells, no whistles, just a focus on delivering approachable street food, and very quickly, too.

The first dish arrives only minutes after ordering. Such quick delivery can be a bit concerning, but flashbacks to the bain-marie pain in that food court in the early 2000s are quickly hushed with the first bite of segmented pork belly, cooked fairly crisp, but still with the expected slightly gelatinous interior. Barely cooked Chinese broccoli retains crunch and soaks in the flavour of a wondrous translucent sauce below.

And then there’s a bowl filled with baby florets of cauliflower presented as popcorn: deep-fried in a golden batter and served with a side of sriracha sauce. What arrives looking like an overly generous serving of these crispy little winners turns out to be barely enough for two. They are utterly moreish and we keep going back for handfuls between other dishes, down to the last crumb.

On the street corners of Chiang Mai they serve a traditionally pork-filled sausage infused with a strong curry flavour, called sai ua. But on this Adelaide street corner, they’ve adapted a version using chicken as the main ingredient, still with that same distinctive spicy curry flavour. Fire’s version is served as a hotdog, which might be viewed as a little insulting to tradition if it weren’t so damn delicious. A crisp and tangy coleslaw layer hides beneath the sausage that is coated with a spicy sriracha mayonnaise and scattered fresh herbs and diced chilli. The fluffy roll acts as a buffer to all of the different layers of heat; it is very well balanced and, most importantly, packed to the brim both in fillings and taste.

And then, finally, half a barbecued chicken lands accompanied by a traditional papaya salad with its spicy and lightly sweet coating hitting that perfect balance of heat, with crispy beans, flecks of shredded carrot and the added crunch of raw peanuts. The chicken itself is tender and juicy, coated in a sauce that adds another layer of spicy flavour.

For all of its quirky adaptations and simple-sounding ingredients, flavour reigns supreme at Fire.

This is a quick lunch spot, for sure, but what it now lacks in the interior, it certainly makes up for in taste.