In wine industry terms, it’s been known for massive vineyards supplying huge corporations with commercial-grade fruit for bulk wines, casks and filling the cheap bins – and for big company profits.

But reputations aren’t everything. In and around the mass grape production of the Riverland there’s another story about a new generation of wine producers and consumers – a story that stands mostly apart from the big companies, and sits well and truly under those big blue skies and the warm inland climate.

For more than a decade now, a small and enthusiastic number of Riverland grape growers and wine producers have sought out alternatives to the big volume Shiraz/Cabernet/Merlot/Chardonnay way of doing it tough in hot ripening seasons.

Their new approach is about grapes that suit the inland environment better than much of the standard fruit for commercial table wines, hence the monikers of “alternative” or “emerging” varieties.

There are dozens of them, mostly originating from Italy, Sicily, Spain, Portugal, and Greece, where the natural climatic conditions breed fruit that can tolerate hot summer ripening and still retain the acidity and structure essential for making quality wine.

Literally it’s an A-Z list: Arinto to Zibibo, and plenty in between. Among the best of them are Fiano, Montepulciano, Nero d’Avola, Aglianico, Vermentino, Greco, Tinta Baroca, Petit Manseng, Mencia – the names go on and on.

Growers such as Bruce and Val Bassham of Bassham Wines based at Barmera, Ashley and Holly Ratcliff of Ricca Terra, based at Barmera and Glossop with vineyards around the region, Pam and Tony Barich of Whistling Kite Wines at New Residence, near Loxton, and Eric and Jenny Semmler of 919 Wines at Glossop, have pioneered this new era of varieties that now point to an exciting future for the Riverland region.

The Ratcliffs have been at the forefront of the new variety movement in the Riverland, committing to the region in 2003 when they purchased their first vineyard at Barmera. They quickly pulled out old Ruby Cabernet and Sultana vines and replaced them with varieties such as Nero d’Avola and Vermentino.

Under the Ricca Terra Farms banner, they now grow 200 acres with 40 varieties sold to close to 40 separate wine producers each year, resulting in about 120 different wines.

Like many now following this route, the vines are sourced from nurseries capable of showcasing how the varieties perform in the Riverland climate – Yalumba and The Riverland Vine Improvement Committee.

“I thought from the very beginning, after seeing some of the varieties overseas, and seeing how the fruit suited the Riverland, why aren’t we planting these,” Ashley recalls.

“I didn’t know much about them but I thought we should just plant them, and see what happens. They made us very happy – they all did well.” 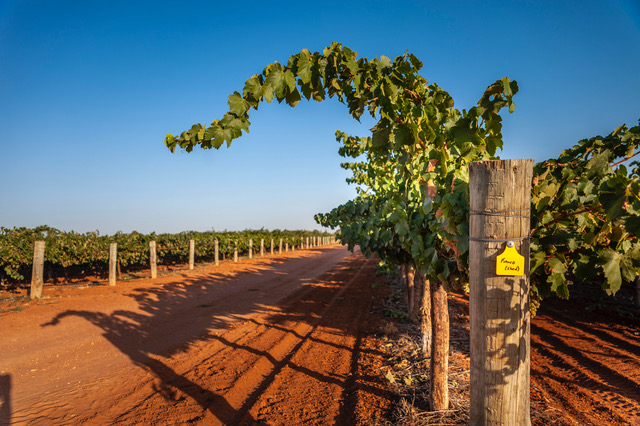 Some of the Bassham’s vines, growing in red Riverland soil.

He’s more convinced than ever that this is the future of the region rather than just the bulk growing mindset that has typified the Riverland.

“Yes, we’re always going to be a bulk region, but we don’t have to be just that,” he says. “It doesn’t have to look like it’s looked in the past.

“Growing and producing alternatives are good options for other growers in the region. Growers have to understand that we have to think we are growing quality wine, and not go out there for bulk growing.”

Lower water demands, modern irrigation systems, the right varieties for the environment and changing market trends all make the alternative varieties hot property. It can only be good for the Riverland, Ash says.

“Our role is to show what the potential of the region can be, and I think that potential can lead to more people coming into the region and making more quality wine.

“That can only be beneficial for the region as a whole.”

It’s not just about newcomers. Bruce and Val Bassham were born and bred in the area and inherited Bruce’s family property at Barmera, now in its 100th year of grape production. Bruce himself has worked 57 vintages there. For the couple with deep roots in the Riverland, the addition of alternative varieties to their portfolio has been a saviour.

The move began back in 2008 when a big company quit a contract for their Chardonnay. They were already two years into converting to organic production and were scraping a living from their Shiraz and Cabernet as well, but could see a rough road ahead if they were to stick to the same old ways.

With a group of other interested Riverland growers, including the Ratcliffs, they visited the alternative variety pioneering Chalmers family nursery vineyard upriver in Euston on a horribly hot February day in 2009.

Bruce recalls the visit as a light bulb moment: “It was the greatest way to find varieties that stood up to the heat. You could just walk past the vines and for many there was hardly a berry left, they were all sizzled. Then you would come to another vine that was quite happy.

“We didn’t have a clue what we were looking at, but we wrote the name of the varieties down, came home with a list and investigated them, formulated a plan to plant six varieties, and top worked within a year (grafted onto the base of vines already planted) over 30 acres.”

The list included Lagrein, Fiano, Vermentino, Montepulciano, and Nero d’Avola, which went in on its own roots. Meanwhile, they were selling their usual harvest for a pittance and even growing pumpkins as a cash crop to get by.

“We were able to turn it around; we sold all the alternatives the following year, and took a little while to get the price to where we wanted, but it was still a whole lot better than the conventionals.

“We knew we had to do it. If it was just going to be a couple of acres it would never change the business – you might feel good, but it wasn’t going to generate an income.

“It was either boots and all or nothing.”

It’s now 10 years since that first crop of alternative grapes and they have close to 30 varieties in the ground, some just four or five rows. They’ve never been left with fruit on the vine for lack of sales. The demand for the new varieties has grown as well, enough for Bruce to plant a new vineyard in the coming year.

The Bassham’s story says a lot about how the Riverland is changing its reputation. Even while the percentage volume of alternative varieties remains small, the capacity to grow quality fruit that’s in demand and suits a changing lifestyle wine culture is creating a new impression about what the region is about.

“It’s become the talking point,” Bruce Bassham says. “It’s a fresh story, and there’s no bulldust about it. It’s a real story about better varieties for our climate. We now know we’re able to grow quality here in the Riverland, and people love the wines.”

Since my visit to the Riverland to research this story, a vicious hail storm ripped through the Barmera vineyards of both the Ratcliffs and the Basshams, destroying much of their alternative variety crops. They weren’t the only ones, of course.

“The ferocity of the storm (on Saturday, November 6,) was something we had never witnessed before,” Bruce Bassham reported. “We have seen many storms over the years but not like this one!

“Our home property was hit quite badly which is many of the alternative varieties. Some are worse than others, some varieties seem to have handled it better than others right next to them. Younger vines did not stand a chance. In saying that our aged Shiraz are smashed as well.

“After 57 vintages we have seen most things, not two of them alike. We will get over it!” 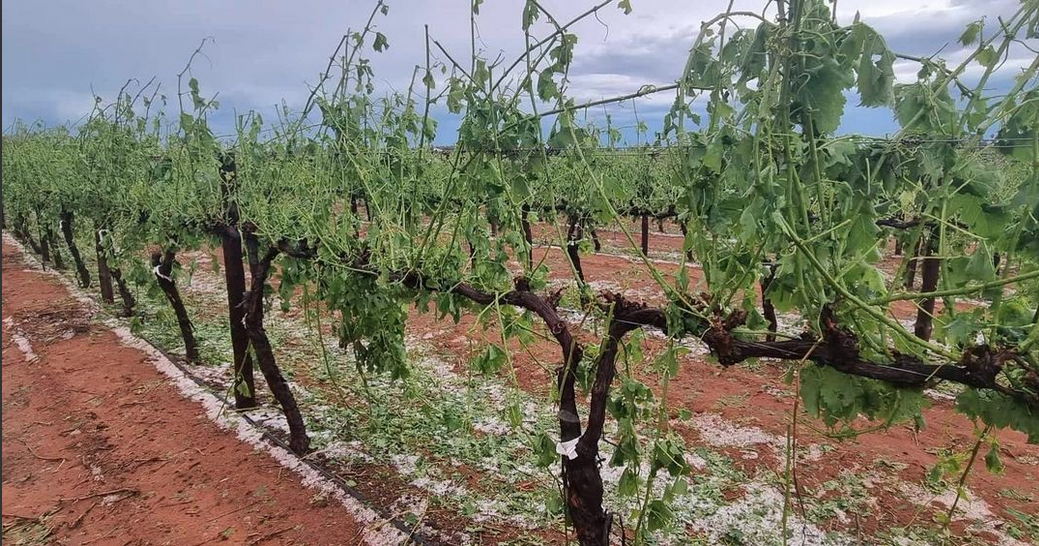 Some of the storm damage posted by Ricca Terra Farms on their Instagram page.

Ashley Ratcliff posted a running reaction to the storm on Instagram.

“To be perfectly honest it was somewhat unbelievable and gut wrenching,” he wrote the day following the storm.

“At 4pm four of our beloved vineyards were destroyed …our estimate is we have lost 80% of the crop.”

He wrote later: “In a matter of a few minutes, we became just Shiraz, Cabernet Sauvignon and Chardonnay growers, as most of our vines that were carrying alternative grape varieties were stripped bare!

“While we are sad with what has happened, I know things could have been much worse. A number of our other vineyards spread throughout the region were not impacted.

“Compared to many other grapes growers who are in the Barmera region, we have options to claw back some of our losses. We have a wine brand. We have amazing distributors who have built the Ricca Terra brand across Australia and many key markets around the globe. We have great friends in the wine trade and we have the will to do our best to increase our wine sales.

“One thing we are not looking for is any handouts or pity. Rather we are going to work our butts off and attempt to sell more wine. This is the only way we can etch some sort of positivity from this freak event…” 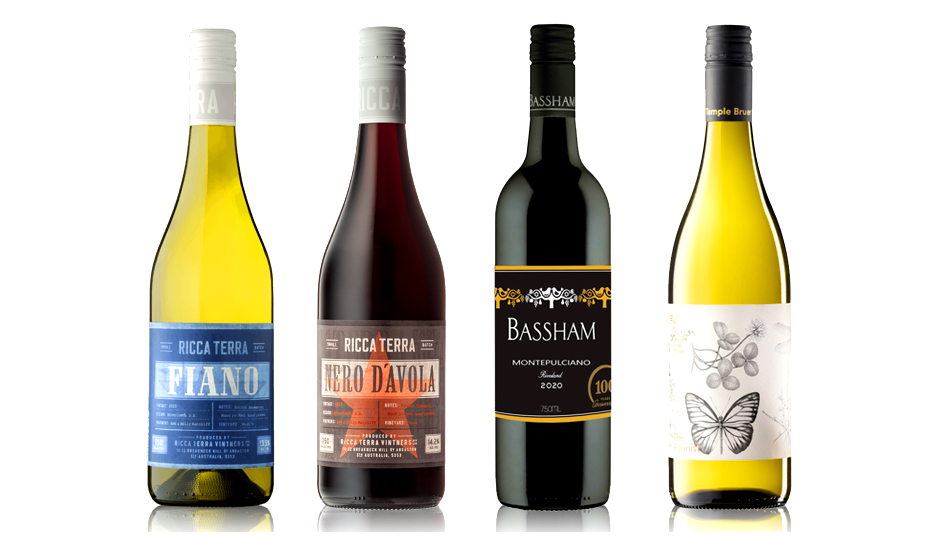 One of many alternative varieties in Ashley and Holly Ratcliff’s Ricca Terra and associated brand portfolio. Go to www.riccaterra.com.au to see them all and buy plenty to assist post hailstorm. This wine won trophies at the 2021 Riverland Wine Show for best single vineyard and best alternative variety classes. It’s beautifully expressive in the glass with floral aromas, sea breeze and sun-dried linen notes to begin, drinking neatly thereafter. Well composed with lovely acidity, texture and flavour matrixed superbly.

This Sicilian original red grape is one of the Ricca Terra star performers, named Australia’s best Nero d’Avola in last year’s Young Gun of Wine Awards and scoring a gold in this year’s Riverland Wine Show. A brilliant hot climate vine, using half the irrigated water of common French varieties. The wine itself has a light touch to it, cherry and almond in flavour profile with notable fragrance throughout and finishing with mouthwatering texture. The epitome of deliciousness.

Another gold medal wine from the 2021 Riverland Wine Show. Bruce and Val Bassham also received the Riverland Wine Industry Award. This wine is so open-hearted and welcoming to the palate with lovely sweet fruit flavours, a faint note of mint/eucalypt in the background and fine powdery tannin mouthfeels. It’s arguably one of the most food-compatible wines you can come across for many meat dishes, from classic pub steaks through to beef and pork with chilli.

This wine is another Riverland gem, and falls into the field of being a traditional grape variety that has found new life in a modern, dry style rather than the usual sweet Moscato approach many producers might take. The Temple Bruer team often joke during harvest that they’re surprised any grapes actually make it to the winery because they’re so delicious “most” get eaten in the vineyard. This scored the trophy for best organic/biodynamic wine at the 2021 Riverland Wine Show. It’s perfumed, though not over-the-top exotic for the variety, with fragrance remaining in the palate as you sip. Fresh, clean and cleverly crafted texturally in a dry wine framework, it’s an absolute no-brainer for the Riverland.