Riesling and the Clare Valley are synonymous. In saying that, the simplicity of such a connection can lead to unfortunate assumptions.

As in: that’s all there is. Wrong. Just check the list of traditional red varieties from most producers in the region, among them the likes of iconic – yes, that word again, and rightfully so in this instance – Wendouree. And for further proof, the wine list at the progressive Watervale Hotel includes all kinds of surprises from around the Clare Valley region spanning 25 or so different varieties.

On the other hand, Riesling is no one-trick pony either. Very few other grapes can do what it does, from sparkling to the now-familiar Australian fresh, dry style, as well as off-dry, semi-sweet, dessert, matured, funky and fortified.

It does it all. It’s not known as one of the great “noble” wine varieties for nothing.

It might also win a few debates on which variety best expresses its regional origins and, more closely, its specific site and vineyard provenance with soil and stone types entrenched well and truly in that argument.

And then it comes to telling the story of its growing and harvest season, otherwise known in the lingo as “vintage variation”.

Some winemakers celebrate as many of those differences as possible. Others seek out consistency. Both creative and business models are equally laudable.

Tim Adams’s eponymous Clare Valley Riesling is modelled on the Bin 7 Riesling, made by his mentor and friend, Clare legend Mick Knappstein, under the old Leasingham label, created from vineyards across the length and breadth of the valley.

Adams follows the same layering of acidity and fruit-sweet characters gained from many separate sites, aimed at achieving a consistent style year on year.

“It’s about keeping Mr Mick’s story and methodology alive, and our consistency always stems from the acidity protocols we follow with no additions and typically low-alcohol levels for the region,” Adams says.

He also makes a more distinctive variation from his estate’s Skilly Ridge vineyard, and in the past two years has ventured into more adventurous territory by leaving that wine on its yeast lees for 12 months before bottling and release.

“You get an increase in texture in the wine that doesn’t come naturally by taking it off lees and banging it straight in the bottle, which of course is the Australian way,” he says.

“We wanted to show a bit of development in the wine, more texture and a softening of acidity, and the yeast lees contact fits into that plan really well.”

The more traditional approach to a classic dry Riesling style is followed by Pikes, based in the Polish Hill River district but, for their popular Traditionale release, tapping into a range of vineyards across the whole region. If you want to witness how different vintage conditions affect a wine, track down a 2020 release and taste it side by side with the 2021: the former is more generous in its fruit sweetness, ravished by heaps of citrus flavour and softer acids characters, while the ’21 is much more racy and electric on the palate. Again, this may also be a matter of an extra year in the bottle showing its calming influence.

Vintage variations are not necessarily a big issue with Auburn-based winemaking couple Jeffrey Grosset and Stephanie Toole, the creators of Grosset and Mount Horrocks labels respectively. They both have worked on developing more balance and diversity in their vineyards with biodynamic practices reducing seasonal differences, though they recognise that 2020’s wines were a little softer and generous in style than this year’s.

“The (2021) vintage was beautiful – that’s it,” Grosset says. “Our Rieslings have both density of flavour and structure, the palates firm and concentrated. They’re beautiful wines and will age very well.”

The fascinating thing about Grosset’s Springvale Riesling and Toole’s Watervale Riesling is that their vineyard sources are just 300 metres apart, and while they essentially follow the same winemaking regimes the wines are very different.

“The aspects are quite significant,” Toole says. Hers is mostly south-facing; his is largely to the north. Both are on the classic Watervale profile of red loam over limestone, though his has slate three metres down and he reckons the roots have hit that layer. He has two clones of Riesling, Stephanie just one. They’re unsure if this makes a huge difference, though Toole suggests the way her wine expresses itself could come down to some subtle choices in picking and in the winery.

“It could also be my touch,” she says wryly.

Grosset also makes a separate Polish Hill district, single-vineyard iteration, which historically has been much more minerally and austere in flavour and racy in acids, though with vineyard maturity and enhanced viticultural practices, he sees less of that and more concentrated, brighter and clearer palate expression.

He makes an off-dry style, called Alea, while Toole has forged an international reputation for her elegant dessert-style Cordon Cut Riesling, proving once again the exceptional versatility of the variety.

The search for different expressions to Clare’s general reputation for classic dry Riesling is Kerri Thompson’s mantra in her ‘Wines by KT’ collection, which includes a Watervale sub-regional release, labelled as the postcode 5452, as well as a single vineyard variation called Peglidis, after the grower family, and two more stylistic variations using wild and barrel ferments and other boundary-pushing techniques.

“My philosophy is about letting the vintages and vineyards express themselves, with single-vineyard origins and as little manipulation as I can do,” Thompson says.

“My wines reflect that, and that’s what I love about Riesling.”

The Postcode 5452 wine shows clear vintage variations between the 2020 and 2021 release, the former softer and more generous after a comparatively warmer and dryer growing and ripening season while the ’21 is much racier and zingy in acidity and flavour profiles after a cooler season.

The single-vineyard Peglidis tells us more about that site’s individuality in aromatics and textures, as well as shedding light on how Riesling can be a really different drink after a year or so in the bottle. In the 2020 and 2021 releases of this wine, the more recent is currently like an awkward teenager still finding a sense of balance and self: the 2020, on the other hand, is very expressive and assured. My suggestion: buy several bottles of each and watch the ’21 evolve over summer.

Thompson’s Melva by KT style is wild fermented in very old French oak barrique barrels than left to sit on its lees for four months, with the aim to release more exotic fruit characters, slippery textures and a subtle off-dry sense in the palate.

“I’ve always been conscious of making sure that the style is not defined by any sugar,” Thompson says.  “It’s got to have the extract, texture and grip and be a more all-encompassing experience, and not just making a Riesling with some sugar.”

Each of these ways with the Riesling grape broadens how we need to imagine the variety. There’s a momentum building in the many variations of Riesling, KT says.

“Now is an opportunity for other styles – that dry style story has been told and now we are getting feedback about the wines with a little extra phenolic edge, a little bit of textural quality, a little bit of residual sugar, a little more exotic fruit.

“That’s what is bringing new people to Riesling, while the traditional lovers of the variety still love that dry racy style, and will love the ‘21s.” 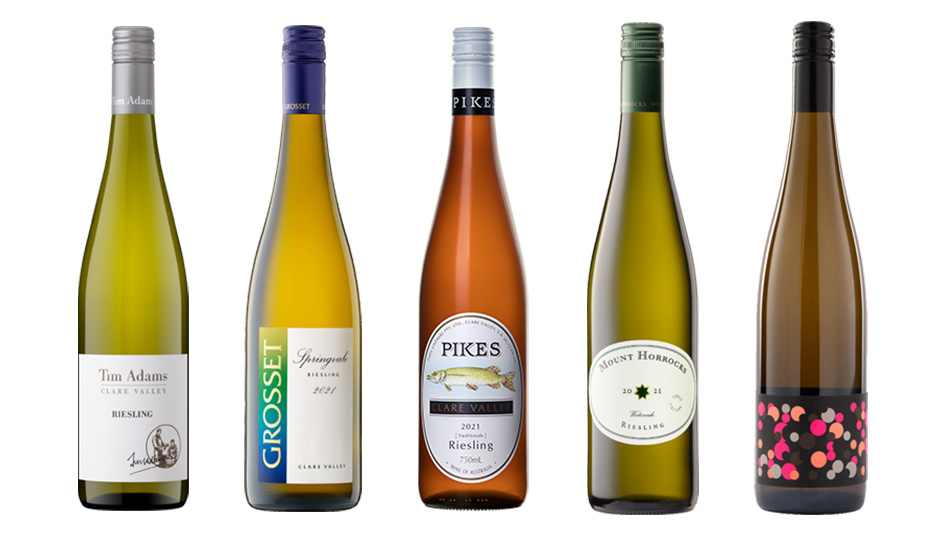 Classic styling here: lime squeezed over apple juice, judicious fruit ripeness and with acidity balancing. Offers an easy-going version of the region’s main attraction with less attack than other ‘21s tasted and a good introduction to what the regional/varietal combo can do.

A crisp, classic, fresh, dry creation with cut lime aromatics and pithy citrus juices in the mouth. Tangy with typical acidity and definitely racier and more “electric” than its 2020 predecessor that shows more generous fruit and softer “zing”.

One of three Riesling variations from Jeffrey Grosset, here with a waft of white lemon flower fragrance that in a sense suggests a more generous and rounded wine to follow, juicy and flavourful in the palate with deftly worked acidity underneath. His Polish Hill release this year, for its ardent followers, is delicately structured and balanced, a more gentle expression than expected though with crushed minerality and lemon to grapefruit notes rather than exotic limes. And still as persistent in the palate as ever.

Enticing talc florals and bath salts to begin, lavender and pink rose petals then a citrus zing through the palate, tense yet full of vitality with vintage-reflective acidity that sits in well here. It has  youthful exuberance as a new release and will become more and more integrated and laid back over time. Delicious.

One of Kerri Thompson’s more adventurous styles, from the same Peglidis family vineyard from which she also crafts a more classic dry style (highly recommended). This version is wild fermented in old oak barrels, and while designed to show some off-dry characters it hardly presents any so-called residual sugar sweetness in the palate. Starts with a streusel bun like waft, then lemon sherbet suggestions to follow, with textural layering and a finish that has a subtle tonic quinine feel. When it comes to creative expression of a traditional variety, this is a delightful success.

In the Studio with Ray Harris

“The best fertiliser is the soles of your boots”