Geoff Weaver is standing at the top of his Lenswood vineyard pondering the horizon. Nitschke Hill, Mt Torrens and the summit of Mt Barker pop gently skywards across its breadth.

He knows this place in good times and tough from the first time he stood here in 1982. He’s had dozens of great seasons, but two catastrophic bushfires on the other side of the ledger.

The scene is familiar to me, even on my first visit. There’s a painting of it, “Golden Autumn – Lenswood”, displayed prominently in a current SALA exhibition of Weaver’s landscape paintings at Tapanappa winery cellar door in Piccadilly Valley, jointly showing with works by couple John and Yvonne Nowland. John is showing small “exploratory” paintings alongside clay works by Yvonne.

In an exhibition introductory note, Croser says of Weaver’s art: “I can only say he captures the essence of the geography in much the same way as his wines reflect the soul of his Lenswood vineyard.”

As a winemaker and painter, Geoff Weaver doesn’t spend too much time thinking about how these two practices complement each other, but he does agree there are moments when they seem to tell similar stories.

“I don’t think you can rationalise it. Everywhere I go the landscape gives me a feeling – it’s impossible to articulate. The only way I can express it is to try to create that feeling I have looking at the land in the painting of it,” Weaver says. “It is my way of connecting most closely with the land I love.

“My aim is to catch the spirit of a place at that moment in time. I want to convey the joy I have in being there to whoever sees the painting.”

He says the process is a bit like a poetry slam.

“Okay, here I am: what is it about this place that I want to bring out?

“As the poet makes a poem about the place, well I have to make a painting. What’s the essence of this place?” 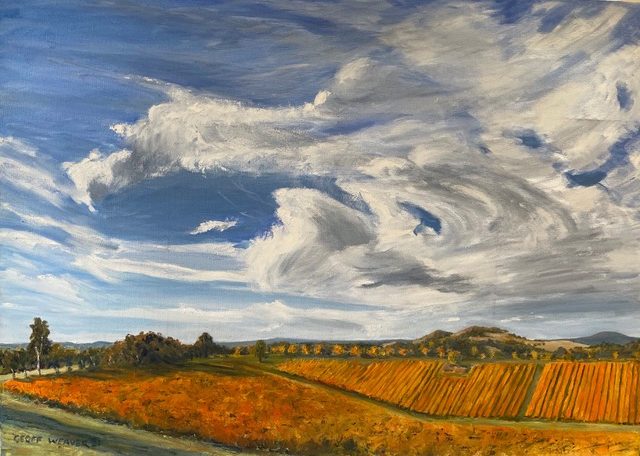 Photos help, often because the landscape and sky can change very quickly. Time, it seems, is of the essence as well. Picturesque expression is not the aim, nor is being “tissy”, as Weaver puts it. Seeking something new in a scene is vital.

A similar poetic disposition can help when it comes to wine, Weaver contemplates, though whether the beauty of a landscape matches the beauty of a wine from it, and vice versa, will always be an unresolved question. He accepts there’s nothing scientific about the sensory appreciation of both.

“I just want to like a painting; I want to feel like I’m there, inspired by what I’m seeing,” he says. “I’m all about heart and not head for a painting. I want it to grab me and for it to have an emotional resonance.

“And the same with wine. I don’t think you need to know a lot about wine to still appreciate fine wine, and as in the film Babette’s Feast, in the presence of greatness you’ll just get it. If you can’t do that, no amount of intellectualising will cross that barrier.”

There are of course the well-learned skills and experience of making art and wine, both beginning with the appreciation and understanding of place.

Weaver’s current crop of paintings tracks his travels into the Southern Flinders Ranges, the Fleurieu Peninsula, Alpine Victoria, and of course his beloved Adelaide Hills. He takes his time. He stops a lot.

“I go down creek beds and stop and listen and look. Then sometimes I’ll go another 50 yards and stop again. You see something and explore further and further – it’s a wonderful thing.”

As a grape-grower and winemaker, he knows also what he’s looking for: it starts with the right site and the right varieties to suit that site.

“You have to understand the subtleties and nuances of that site,” he says. “I know that on a still evening the temperature down on the flat is four or five degrees cooler than up at the top. I know that has an impact of the metabolism of those vines down there, the acid levels of those grapes and the pH of those juices. You know how the air flows; cold air drainage is a crucial thing. I know that I have soils capable of getting through a season without irrigation nearly every year, but I have an irrigation system if they don’t.”

The fire destroyed the sheds and cabin. Inside were all of his paintings. All 95 of them.

And so on with the technical stuff of winemaking, the basic measures of grape sugars and acidity. The skill of choosing the right moment to harvest the fruit. The capacity to create a range of blending options in the winery – a stalk inclusion in one batch of pinot, a malolactic ferment in another parcel of chardonnay, different oak choices and barrel sizes.

After that, it’s the “imponderables”. Grape and wine flavours are the guts of what Weaver the winemaker is after.

“The complexity of all this is amazing. There are 400-odd flavour compounds, but in the end, winemakers are empiricists. We suck it and see, and try to do more again of what we like.

“We spend our whole lives trying to unravel the mysteries of wine and, in the end, we don’t get there,” he laughs.

“We know the great sites in the great regions grow wonderful flavours and we know they’ll make really excellent wine, and in the hands of a really good maker, they’ll make some of the great wines.

“I won’t say that a wine is the essence of the landscape, but it’s the sum total of this place,” he refers to his own patch at Lenswood. “Terroir is a great term, and a great wine expresses this terroir in a physical form.

“That’s what I have always loved.” 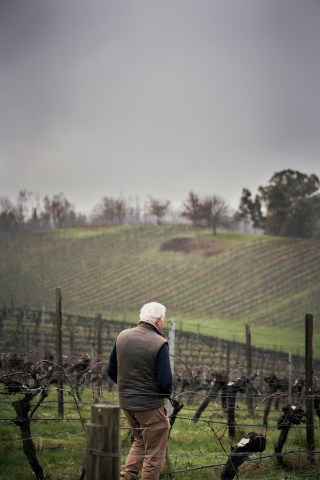 Intriguingly, Weaver has rarely painted his vineyard landscape. One was, for many years, on the back label of his wine bottles. The other is his new “Golden Autumn”, completed earlier this year and one of more than 20 new paintings from a range of places that he’s completed since December 20, 2019, when an out of control bushfire swept from the northwest of Lenswood, destroying 30 per cent of the Adelaide Hills region’s vineyards including the Henschke’s blocks immediately behind Weaver’s, seriously impacting his own, and continuing through the district to Lobethal, Woodside and turning on Charleston as well later in the day.

He was there with a neighbour when a fire truck came up the road seeking a way to a flare-up caused by embers catching in trees on the southern boundary of his property. The fire had initially jumped the vineyard, the wind roaring and swirling as a huge “Elvis” helicopter arrived to take water from his dam to extinguish the flames.

“We thought we should go down and deal with it as well,” Weaver recalls. He got to the edge of the dam and sat there, a lone kangaroo beside him, smoke blanketing above them so he could barely see his cabin and sheds at the top of the vineyard.

“I would have jumped in if things got worse. Then we turned around and the fire had come over the hill and taken over – all bets were off. It was pretty fierce.”

The fire destroyed the sheds and cabin.

Inside were all of his paintings. All 95 of them.

“If you’re out here you are going to get a fire. You have to deal with it, and don’t grizzle.

“It’s a funny thing – I don’t know if it’s because I’ve played a lot of sport, but I thought, well this has happened, there’s not much I can do about it.

“I’m going to have to live with it, so what am I going to do now, what’s the next step.

“I can handle this.”

The difference, of course, was that lifetime of paintings – gone. He accepts they are, in one sense, just possessions.

“They are nothing compared to human life,” he says. “But every painting has emotion in it. There is other stuff. It’s not as simple as just possession.”

Fortunately, he feels mentally strong about the whole business. As a farmer, he had to get on with restoring his vineyard and infrastructures. He made wines from the vineyard that year and has continued to do so. And he began painting all over again.

“We are a small blip on the scheme of things anyway,” Weaver muses. “Even all the things we worry about like climate change and over-population – humans are a micro-second in the great scheme of history.”

We are now down beside the dam where he famously sheltered with his kangaroo companion on the day of the fire. The story was recounted around the world media.

Weaver’s conversation is peppered with quotes from Streeton, Winton and many more. The classics, the books and artists who have contributed to his “rich inner life”.

And then the frogs start up.

“It’s so lovely to hear from them,” says. “They are environmental indicators; if you have frogs, you are doing the right thing.

“I love to hear them. I know the place is in good fettle.”

Geoff Weaver’s latest paintings are at a SALA exhibition along with works by John and Yvonne Nowland at Tapanappa Cellar Door, 15 Spring Gully Rd, Piccadilly. Until August 31.

On-song Lenswood Chardonnay introducing the aromas of white stone fruits, grapefruit and a thread of crushed cashews. The major palate expression here tells us of just how cool Weaver’s vineyard is – the acidity is naturally fruit-derived, vibrant, energetic and pithy in the finish with a tang and zip to go on with. Incredibly youthful right now and designed to mature gracefully as its still available 2016 and 2013 predecessors clearly show in their elegant balance and still delicious fruit power. These are supreme pedigree Chardonnays, able to take their place on the world stage.

This variety will always express its terroir and vintage, tapping into the traditional ways, fermented in older oak barrels and aged for a while on its spent yeast lees. In this year there are attractive brown lime cordial notes, typical and familiar in Riesling as initial aromatics and delicately cast in the palate. The vintage has tempered the role of acidity, just a soft pitch of citrus tang rather than aggressive cut. Most of all, lovely flavours hold their long line. Delicious.

Working with the same fruit as his regular Sauvignon Blanc (current vintage 2020 – $30), this is a more complex style, yet quite understated, needing more contemplation than its simpler, yet still finely crafted sibling. Here there is a creamier feel, notes of orange cream biscuit, and a whiff of woodsmoke (not bushfire related, but from the wild yeast fermentation in oak and 12 months on yeast sediment). Textured and lip-smacking with its inherent acidity lying underneath. Superb.