These vines – they’re old bastards. They’re cranky old things. A right piece of work, they are.

Such terms of endearment. In reality, Kaesler head winemaker Reid Bosward and viticulturist/vineyard manager Nigel Van Der Zande truly adore the ancient vines that hide behind their main road cellar door just south of the Barossa Valley township of Nuriootpa – so much so they named a tiny block of them with classic reverse-ocker respect, calling it and the magnificent Shiraz it produces the “Old Bastard”.

Australians will get it. Many others may struggle with the apparent rudeness. If all else fails, an extraordinary label illustration by British artist and former Hunter S. Thompson collaborator Ralph Steadman ensures this bold Barossan wine stands out as an outrageous and glorious statement of the region’s ongoing love affair with its ancient Shiraz vines. 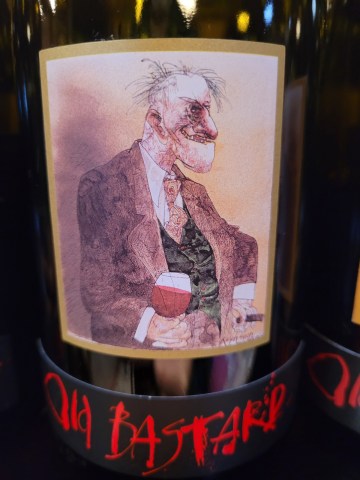 The Ralph Steadman cartoon that graces the Old Bastard.

The Kaesler team has just released its 2018 Old Bastard Shiraz, which marks the 125th birthday of the vineyard. Planted in 1893 by the Kaeslers, a Silesian pioneer family who landed in the Barossa in 1841, the block and accompanying winery were bought by agribusiness financier Ed Peter and Reid Bosward in 1999. Bosward had already seen some of the fruit in his corporate winemaking day job. Two vintages, 1998 and ’99, of Shiraz made by an interim proprietor from the old vines were already in barrel and needing further guidance to bottle. The vines were in a terrible state.

The ground was salty. The old buggers were suffering from the dieback disease known as eutypa. A lot of work was needed, to revive the soil and the vines, driven by Van Der Zande who began an intense program of adding organic matter and reshaping the crop and canopy. He could see the improvement within just a few years, and remains devoted to their cause.

The usual phrase we’d use here, of course, is that Bosward and Van Der Zande love these vines “to death”. In this case, again, it’s the complete opposite. They’ve loved these vines back to life. They have been their carers and custodians for more than 20 years now, and have kept the old bastards chugging along, year after year after 125 plus years.

Early on in the process they learned a key lesson, Bosward says: “Our winemaking had to change to suit the vineyard, not the other way around.

“It was quite a contradictory position to take in the way we were working at that time.”

While much of the 2000s was all about big, black, dense, high-alcoholic Shiraz that the American market had fallen in love with, the efforts going into the soil were beginning to produce fruit that was less black and more with a tinge of red.

I look at these wines and think about Muhammad Ali – they’re big, but light on their feet

“The wines were lighter, and that suited me because I had a problem with what the Barossa was producing at the time, those monolithic 17 percenters,” Bosward says.

“There’s a place for that for sure: they were garnishing great scores and getting huge money, but I knew for sure those wines would never transform into anything magical.”

To keep on making wines like that seemed all wrong to Bosward and he and Van Der Zande started listening to what the vineyard was telling them about what it needed to stay fit and healthy.

In a recent museum tasting of all the Old Bastards, from the original two Bosward inherited and later reworked for release, through to the just-released 2018 and the three latest, 2019-2021 (the latter tasted, but yet to be released), there are moments where lessons were learned, mistakes made, and great leaps forward noted, according to the Kaesler crew. 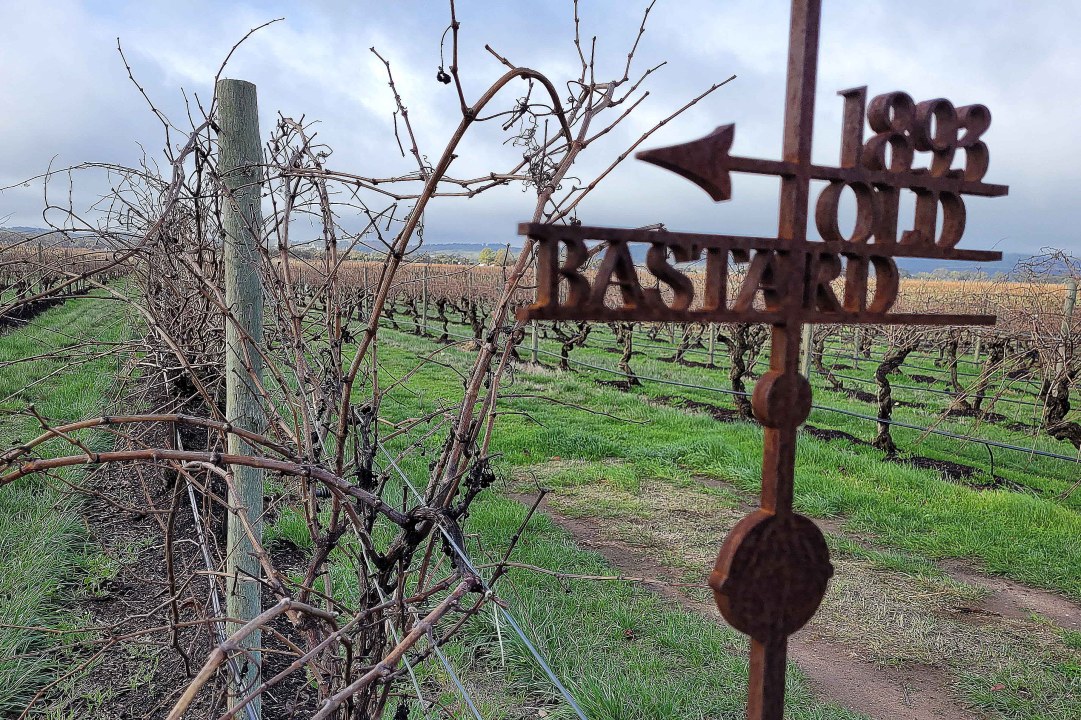 A turning point was the 2005 vintage, a wine that sold out the fastest, that garnered the highest score from Robert Parker, the US critic who championed the Barossa giant reds.

“And it’s the one I dislike the most – we got tricked into going to 16.5 per cent alcohol on that. I can’t stand it,” Bosward says.

But it taught them a lesson. They were still learning about the vineyard and around that time they started to see the increasing benefits of the viticultural improvements as well as harvesting earlier. The wines began to turn a corner.

There was, however, a muscle-bound legacy from those mid-2000 wines that perhaps has defined the Old Bastard and its sibling Kaesler reds for many observers. They might want to reconsider, given what the past decade of OBs has revealed.

Each vintage brings its stamp to the wine, and if there’s one thing that those old vines can do it is weather the ups and downs of the growing seasons. But from 2013 there is a lighter touch and a greater sense of balance overall, give or take a couple of years where the Barossa’s bold character can’t be denied.

“You can’t override the seasonal differences when you have one vineyard,” Bosward says.

But you can’t take the Barossa out of these old beauties, he notes. And why would you? They’re blessed, he claims, with fruit that many regions would cut off their left arm to have.

“We just have to learn to embrace that, while keeping a light footprint. I look at these wines and think about Muhammad Ali – they’re big, but light on their feet.”

People have to accept that this is the way forward, he says.

“If we went back to the way we were, we’d be stuffed. This is how the vineyard is meant to be now, and we have something that no-one else can touch.

“It’s clear that the old vines make a difference. They need to be cared for. There are probably 50 others like it in the Barossa but this is the vineyard that defines us.

“Let’s just make sure the vineyard gets celebrated first and foremost.”

The Barossa’s traditional white variety, though sadly out of fashion and increasingly a rarity. From 1961 planted vines, proudly tended, this is strikingly modern, whole bunch pressed, and attractive in so many ways. Smells of sun-kissed linen hanging on the Hills Hoist, tastes of apple juice and a squeeze of lime, then lightly honeyed chamomile tea. Genuine purity prevails; a delightful expression of an important regional star.

Kaesler’s step-into range, from estate vineyards and showing-off a fair bit at the price. Here as fragrant as Grenache can be, violets to the fore, then a touch of the variety’s typical fruit sweetness with a suggestion also of fruit and nut milk chocolate in the palate, finishing with a soft and silky feel. Generous and warm-blooded, with some palate warmth, though that dissipates beside a hearty braise.

A traditional blend of Grenache (60%), Shiraz (21%) and Mourvedre (19%), all old vine material. Led with some aromatic gravitas by the Grenache here in an earthy, floral style, with a good smatter of darker, exotic kitchen spice adding to the expressive start. And through all that, delicious cherry liqueur-like fruit is a palate keynote. Lots to contemplate with unmissable Barossa power.

From two estate vineyards, the Nuriootpa home block and another 55-year-old site in the Marananga district. No shirking here, this is big, dark – almost black – Barossan Shiraz, full-bodied power to the max. Pumps regional and varietal character straight into your bloodstream with a whiff of charry oak, bold blackberry crush flavours, and rich mocha feels in the palate. That’s its identity, so celebrate it.

Small amounts are made each year from 1893-planted vines out behind the cellar door and just metres from the winery. 2018 was a terrific season for this wine, which appears in classical full-bodied Barossa dress. Sooty senses add an extra dimension to its otherwise earthy floral fragrance – it’s a vineyard character worth noting. Ripe, vibrant fruit, heaps of purple to black berry flavours with crushed plums for added exuberance, and a tannin vibe that dusts the palate with the powders of fine chocolate and coffee. Totally engaging, full of life-affirming energy. With its mad Ralph Steadman label, it’s a very special treat. 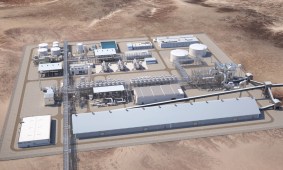 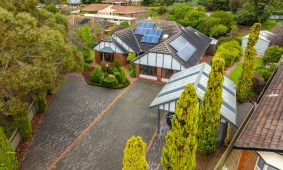 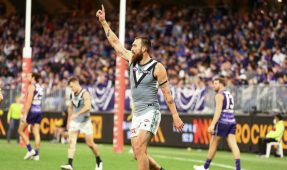 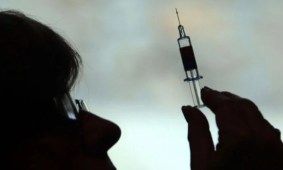