The sign at the front of Mum Cha gets right to the point: “Dumplings? Yes.”

It’s the perfect encouragement as we enter the compact but bright space, that utilises the former fit-out of a Spanish and Portuguese restaurant and an Italian wine and snack bar, respectively. Sadly, neither of these two dining formats quite worked out in the tenancy – each only lasting a short time before shuttering in the two years before Mum Cha came about. It was a particular shame that Iberia was the first casualty as I remember it being a delightful venue with dishes that perfectly captured the coastal culinary flair of its namesake region.

But we’re not here to mourn the loss of East End eateries of years gone by, we’re here to experience Mum Cha merriment. If their Instagram page is anything to go by, they expect you to have a good time.

Service is brisk but friendly. We’re seated in seconds and already pondering a menu that’s split into sections including Snacks, Dimsam, Hot Dish and Dessert. With a pan-Asian attitude, Mum Cha’s menu includes typically Chinese dishes and dumplings, some Japanese favourites, other dishes that hail from Vietnam, and a casual nod to dishes or ingredients from Korea and Indonesia.  With all this choice, there’s an easy option to let the kitchen team feed you their daily selection of eats but we decide to go it alone, starting with selections from the snacks list.

Charred edamame is sprinkled with a salty chilli flake seasoning, and BBQ pork pancakes are golden brown pillows of pastry encasing a delicious filling with a smoky flavour that has us wishing we’d ordered more.

Before we can polish off starters, another round of dishes land. These are dumplings of different varieties and it causes a little frantic panic as we scoop and savour the last portions of our earlier bites before plates are whisked away. 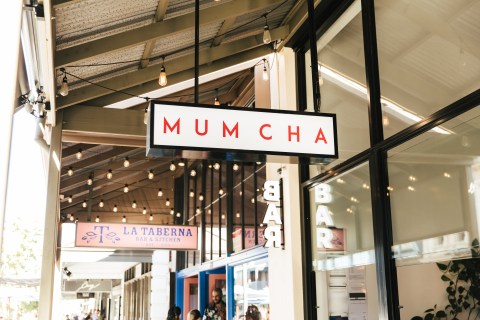 First off the freshly hand-made chopping block are wontons swimming in a soup: make sure to spear these with chopsticks to let the liquid seep into the centre that is already generously filled with a compacted medley of minced chicken and prawn. The translucent soup contains chopped spring onion. There are oohs and ahhs of steaming delight as these are scooped directly from bowl to mouth (skipping the share plates for efficiency) and I already regret sharing this tasty dish with my dining companions. The pitfalls of ordering for a group. Next time they’re on their own.

The crispy underside is exposed on pork and cabbage potstickers, sitting in a shallow pool of sweet and salty broth and topped with coriander that seems more for looks than taste because these morsels already pack their own meaty and herbaceous punch. Xiao long bao are less successful by comparison, but only just. It’s fair to say these may have spent a little more time in the steamer than they needed, resulting in split cases that means the expected soupy filling seems to be lost to the steamboat below. But they are still tasty and disappear almost as quickly as their predecessors.

And lastly, there are silky prawn dumplings sprinkled with a lightly spiced seasoning that quickly make us forget any shortcomings of the previous dish. These are dumpling perfection, packed with juicy flavour and again have us wishing we’d ordered more.

Mum Cha does the best Hainanese style chicken and rice on this side of Chinatown. This simple dish is elevated by another salty soup, served as a side bowl to be poured over the rice for maximum absorption. It’s not the prettiest of meals, with steamed chicken atop white rice a little difficult to beautify. But as all fans of this dish know, it’s all about flavour. Accompanying baby leaves of bok choy add crunch and colour.

Can’t stop, won’t stop. And we don’t stop. Next come the Vietnamese fish cakes and it’s here we realise that our earlier resistance to over-ordering has finally paid off. This generous and delightful dish is bright and fragrant with roughly chopped mint combined with crispy shallots coating large slivers of fish cake that are expectedly spongy and flavoursome. An assortment of sliced vegetables are all cooked but still displaying crunch and freshness, in typical Vietnamese style. You should beware that this has some heat, with a combination of a spicy dressing and added fresh chilli that has the dish standing out from the crowd.

Mum Cha only has one dessert, but today it’s not on the menu. Salted caramel pandan could have wrapped up this pan-Asian adventure nicely, but instead we’re offered fortune cookies as we’re fixing the bill. This slightly naff westernised Chinese tradition has each of us soul-searching to discover the true meaning behind the words printed on plastic-coated paper. One reads ‘Be on alert for a new opportunity’ and aren’t we glad that the founders of Mum Cha did.

Where to eat; what to drink? Read more of our restaurant and wine reviews here.