By the close of the first season of Aftertaste, disgraced international chef Easton West – aka Jimmy from the Adelaide Hills – had not learnt much about himself or how his behaviour affected other people. His biggest achievement was to prove that the angry-white-guy schtick he was accused of wasn’t just a passing phase.

Erik Thomson, until now the go-to actor for likeable middle-aged dads (Packed to the Rafters, 800 Words), is savouring the role of the bad-boy chef whose arrogance and temper saw him insult and assault a food critic and lose his job. Angry at everyone, West returned home to the Adelaide Hills in series one of Aftertaste, bringing his ego and grudges with him.

“I just thought the role was a radical departure for me and I didn’t want to play into the hands of asking ‘What is the likeability of this character?’ in order for it to work,” Thomson says.

“I just had to focus on him being the kind of guy that he is, and the intrigue was going to be in taking it from there.”

Season one, set around the community of Uraidla – the latest real-world addition to the Adelaide Hills food and drink destination map – centres on the restaurant West starts with his niece Diana (Natalie Abbott), a talented pastry chef with an exuberant personality and joyful outlook that West does his best to destroy. By the end of the season, the restaurant has fallen foul of local regulations and Diana has left for London, leaving West to face his future as another has-been in the Hills.

Thomson says the second season commissioned by the ABC wasn’t a total surprise for the producers at Closer Productions, given the interest the first had created.

“The network was always very happy with it, I think, so I guess we were sitting in a good spot to be renewed – but we still had to provide them with a very clear vision of what we wanted to do,” Thomson says.

The writers – Julia De Fina, Matthew Bate and Matt Vesely – had to re-create the world from season one and take it somewhere new. West, in the space between seasons, has been on a small and rocky journey of self-improvement that includes setting up a micro micro-brewery in his bedroom, and attempting laughter therapy.

There is a small glimmer of hope that the chef might have some insight into his anger and arrogance whereas Diana, back from London with a foodie boyfriend, is the angry one.

“We didn’t want to be that kind of show where you have a big flashpoint moment where suddenly everything is all right, because people aren’t like that,” Thomson says. “He has realised he is an arsehole… but he’s still struggling because you can’t re-program yourself so quickly.” 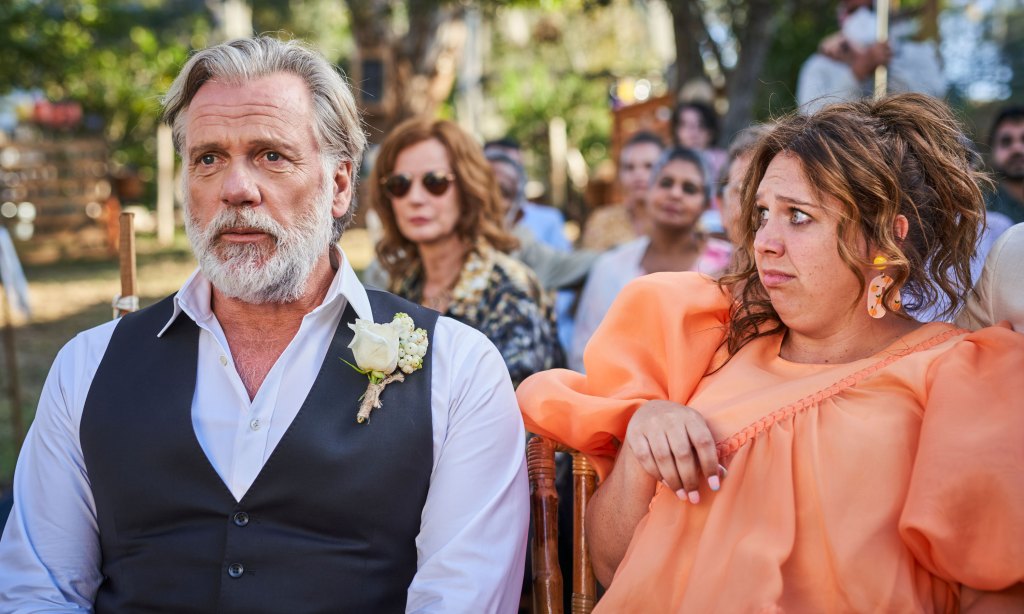 Erik Thomson and Natalie Abbott in the new season of Aftertaste. Photo: ABC

Filming took place on location mainly between Kangarilla and Meadows in the southern hills and only wrapped in March, with a tight post-production ahead of its launch on July 20. Most of it takes place at an old stone house that Thomson, who comes from New Zealand but lives at Port Willunga, recognised as quintessentially South Australian.

The antagonism continues between Diana and West – “I made you and if you weren’t young, fat and female no one would offer you shit”, he barks at her in season one – although the venue is no longer a high-end, foraged, narrative-based foodie venue but a soup kitchen.

“He [West] doesn’t have a filter and he says what some men think; maybe a lot of men think that, and women, too, I don’t know,” Thomson says. “It stirs things up and gets a conversation going, and comedy is a really good place to get those things out.”

Now West has to stay calm in a situation that encourages his best and his worst; in the kitchen environment that he once ruled like a king, but with Diana at his side, and cooking for charity.

Having spent a lot of his acting career playing nice, Thomson enjoys being West, including conveying his slowly awakening self-knowledge.

“Men like that need to have a charm and a charisma about them in order for people to forgive them for their actions,” he says. “In this season we see him struggling and trying to do better, and there is a humanity that comes with that.”

Viewers can expect more of the gentle mocking of Adelaide’s celebrated food and wine scene, with its cultural landscape of natural wines, dishes with intimate personal stories, micro-brewing and romance among the wine barrels. Last season also included a nod to Adelaide Hills alternative culture with West caught up in a drum circle where he takes psilocybin, under the spiritual direction of a tiny shaman called Wood Duck.

None of which strays too far from the truth. Thomson, his wife Caitlin McDougall and their two children shop at the local farmers’ market and eat micro greens, while Caitlin’s mother and stepfather previously owned the Penny’s Hill Winery. Not only that, he has been to a drum circle in the Adelaide Hills, and a sweat lodge.

“I’ve done a drum circle, of course I did, I live down here,” Thomson laughs.

“I love South Australian culture; I love the fact that people have these micro micro-breweries, and little cottage industries have popped up. Everyone should be able to laugh at themselves and we are giving people the opportunity to do that.”

Aftertaste season two premieres on ABC TV on Wednesday, July 20. All episodes will be available on ABC iview.