Making teeny-tiny things is all in a day’s toil for JoAnne Bouzianis-Sellick.

The cinematographer and craft artist has spent the past 30 years working with Adelaide animation company Anifex, where she is frequently called upon to make or source miniature objects and props for TV commercials and short films.

“I’m told that I get paid to go to kindergarten every day,” laughs Bouzianis-Sellick, who loves nothing more than making something out of nothing and getting crafty with vintage tools.

“I’ve made dressing gowns for a stick of cheese, I’ve made tutus for lollies, I’ve made miniature couches and sofas, I’ve done so many sets of curtains… I can’t even do big-scale curtains but I’m a professional at miniature curtains!”

The tutu, in case you’re curious, was for a Pascals sweet commercial. It was made entirely out of lolly wrappers and worn by a Columbine toffee.

At the other end of this topsy-turvy scale, Bouzianis-Sellick recalls making a 2m-long pink rubber glove for a Louie the Fly commercial.

“I’m working every day in a field where everything is not the right scale.”

All of which leaves her perfectly qualified to co-host,  with comedian Jimmy Rees, the new three-part television series Tiny Oz, a Northern Pictures production that sees the duo travel from Sydney to Broome to Adelaide as they follow teams of talented craftspeople and modellers re-creating fascinating moments from Australia’s history – in miniature. 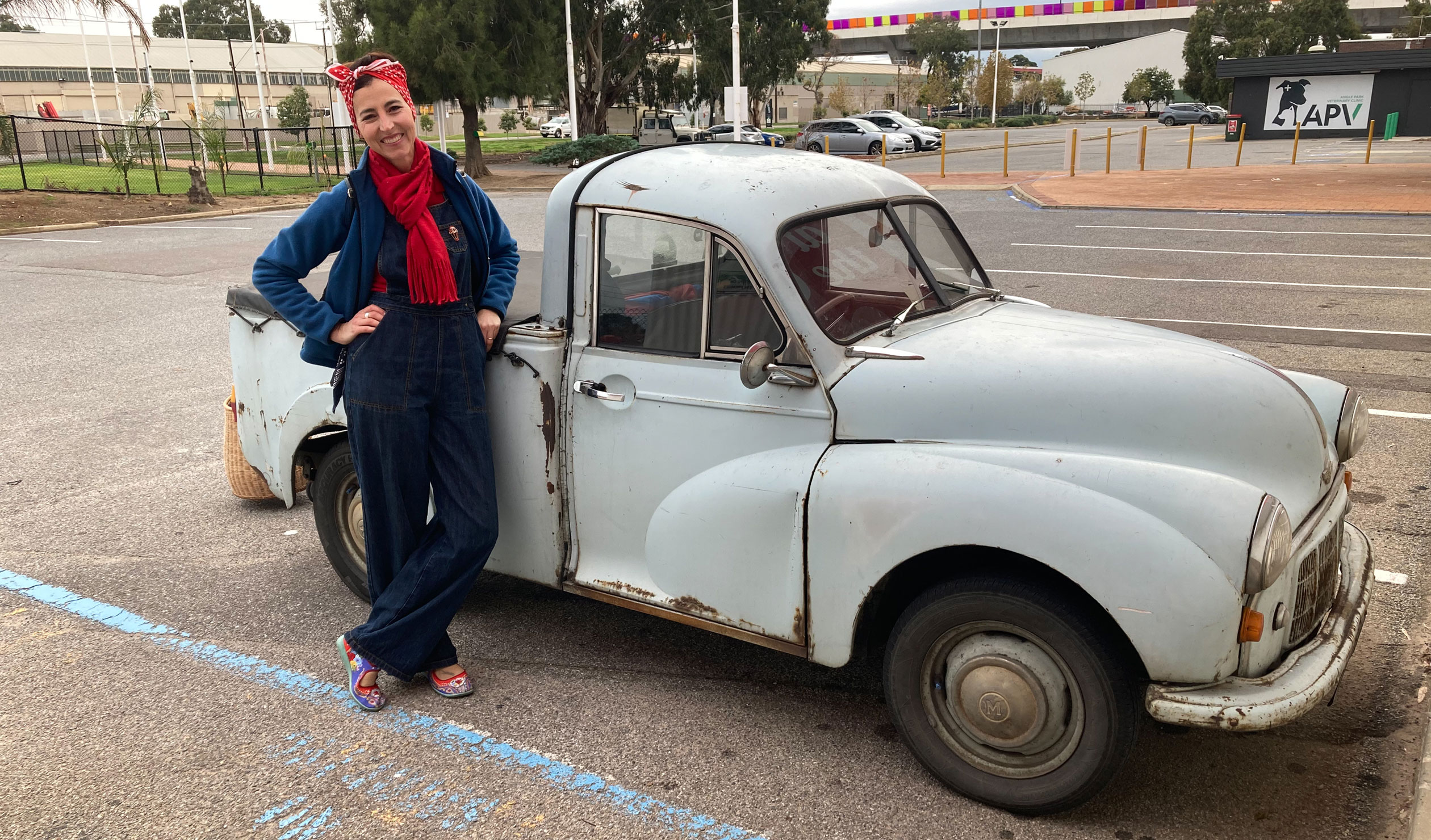 The first episode of Tiny Oz, set to air on Tuesday on ABC TV, is inspired by the relocation in 1916 of hundreds of animals from a zoo on Sydney’s southern side to their new home at Taronga Zoo in Mosman. With the Sydney Harbour Bridge not yet built, they had to be escorted on foot through the middle of the city and transported across the water on barges.

Bouzianis-Sellick visits Sydney’s Yippee Ki-Yay workshop, where a team uses 3D printing and laser-cutting techniques to rebuild in miniature the streetscape and menagerie of characters, including a 39mm-high replica of Taronga Zoo’s first owner, a cast of onlookers in period costume, and animals including an elephant, snakes, camels, a lion, monkey and myriad birds.

Other creatives also have a hand in the tableau that eventually goes on display in the Museum of Sydney, with miniature artisans using more traditional craft techniques to make the plants and trees, as well as adding details and accessories that bring the characters to life.

“Each episode is interesting because each shows a different style and technique,” says Bouzianis-Sellick. “You don’t have to have one specific skill to be a miniaturist.” 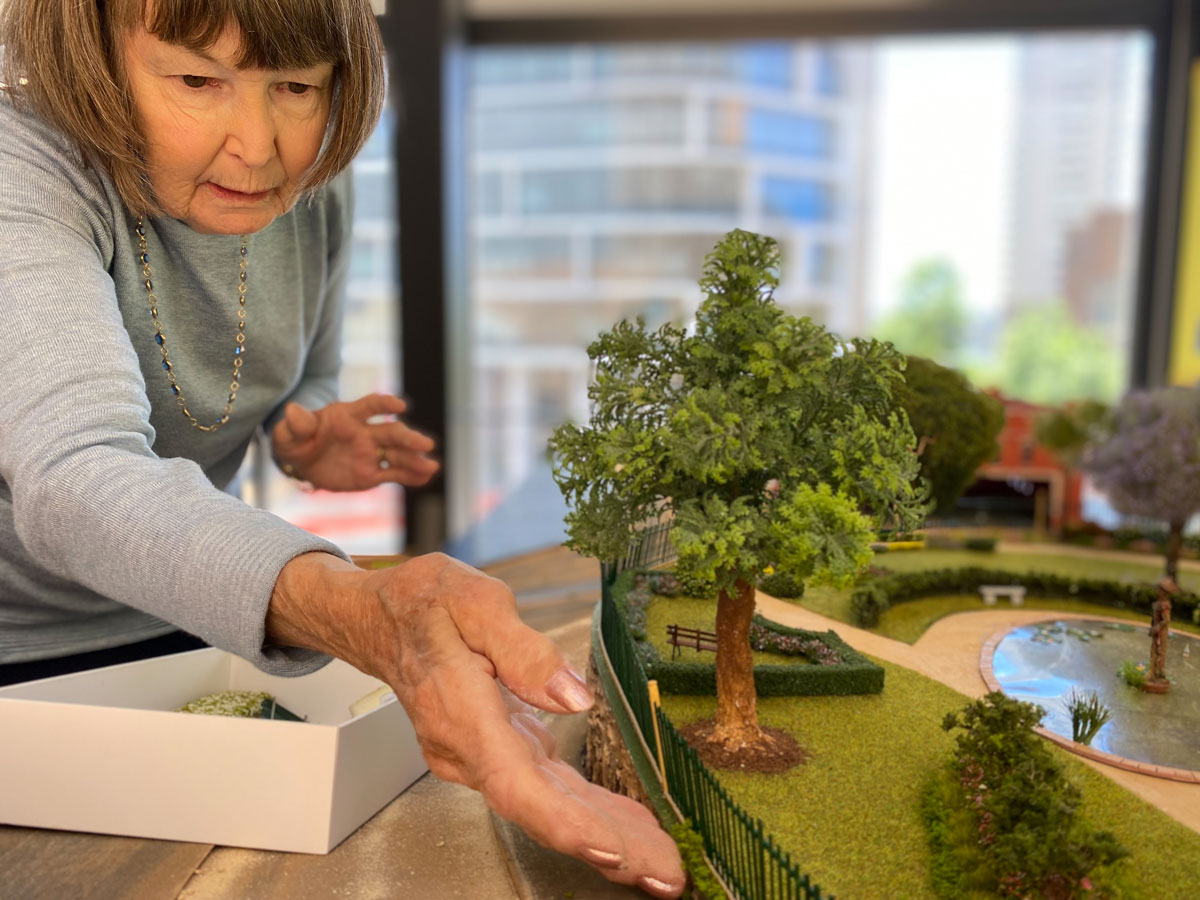 She explains that for the second episode, which transports viewers to Broome during its pearling heyday in the early 1990s, artist, carpenter and miniature model maker Lachlan Fraser used mainly found objects, household materials and hardware store items to create a model that encompasses the Western Australia town and its rich history.

The Adelaide episode draws on the talents of the South Australian Railway Modellers Association (SARMA), whose members were recruited to re-create the scene of aeronaut Thomas Gale’s hot-air-balloon launch in June 1871.

It was reported at the time that a crowd of thousands gathered in the Parklands and every available spot to watch Gale’s attempted ascent in the balloon from the Exhibition Building grounds on North Terrace on June 20. Insufficient gas supply was blamed to his initial failure to launch, but on his second try a few days later the balloon reached the height of its 60m tether rope.

“These events were extremely well attended,” says Bouzianis-Sellick. “And Thomas Gale met his beloved Lavinia [Balford] as they stared across the cane basket of the balloon going up into the air. They became husband and wife… and both of them are here in the West Terrace Cemetery.”

During research for the episode, the Tiny Oz team also learnt about the Van Tassel sisters, Gladys and Valerie, “lady trapeze artists” and parachutists whose entertaining escapades were considered rather scandalous within conservative circles.

“Back in the day they would jump from these hot-air balloons – quite scantily clad for that era – with nothing more than what I would call a canvas beach umbrella strapped to their backs… they would jump out of these baskets and do tricks as they plummeted towards the earth and the crowd would cheer. They had no control over where they landed.

“If they landed somewhere else they were ferried by car back to the crowds where they were cheered and a brass band would play and the like so it was quite an event.” 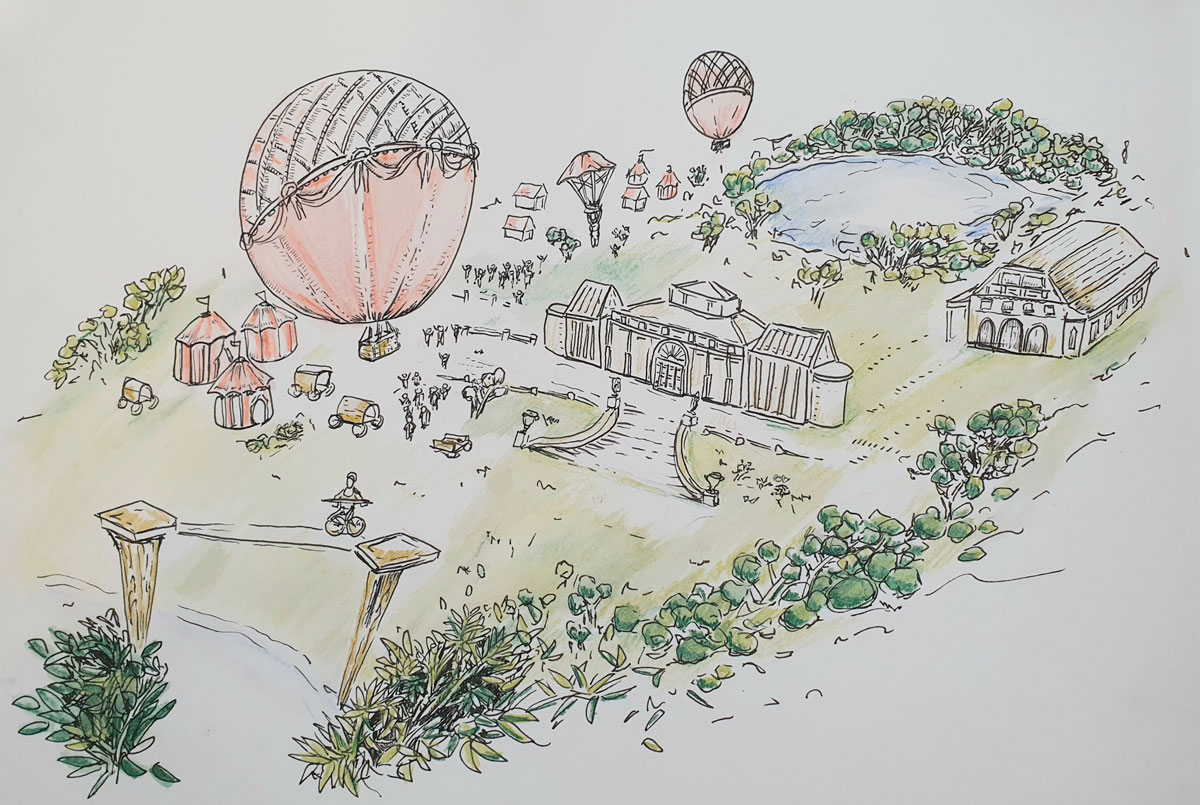 For their miniature re-creation of the Adelaide event, which is on show in the State Library of SA foyer, the SARMA model makers have made hot-air balloons that go up and down, with tiny versions of Thomas and Lavinia in one basket and the Tassel sisters suspended about the diorama. As well as a miniature version of the Palm House, they have also worked off two rare old photos to replicate the Exhibition Building.

The model takes in the Botanic Gardens, including picnickers and other onlookers, sideshow tents, and a man riding a bike on a tightrope across the Torrens.

Like all the miniature tableaus, it is a showcase of imagination and ingenuity: sponge foam, for example, is used to create hedges and garden borders, while a fountain has been fashioned from found items.

“Tea bags feature heavily in the Adelaide diorama,” says Bouzianis-Sellick, who had the opportunity to work on elements of the Tiny Oz models herself.

“You wouldn’t know it, but all the [sideshow] tents are made from tea bags… the guys [from SARMA] usually use tea bags to make the tarpaulins and things on their train carriages and they work wonderfully because the material is designed to be in water; it doesn’t fall apart.

“I always say look for the little things because they are the things that will surprise.”

Tiny Oz premieres on Tuesday, April 19, on ABC TV and ABC iview. The model of the Adelaide hot-air-balloon flight will be on display in the foyer of the State Library of South Australia from April 13 until May 29 (details here).