The Texas-born auteur honours the long-form journalism that has inspired the storyteller in him by designing an anthology of stories that recreate for the screen the pleasures of losing yourself in the diverse array of expansive articles that form each issue of The New Yorker.

The French Dispatch is every inch as richly imagined and elaborately idiosyncratic as one would expect from a world designed by Wes Anderson. Packed with his signature touches – symmetrical framing, interesting aspect ratios, exquisitely detailed miniatures and cross-sections – every frame is a visual delight, continuing and expanding upon his obsession with intricate composition, artisanal detail and cinematic history. Yet this film doesn’t just represent an evolution in Anderson’s aesthetic vision. It is also a development in the complexity of his narrative style.

Set in the fictional French city of Ennui-sur-Blasé, the film offers a whimsically Andersonian view of the town, packaged as a series of stories from a literary magazine titled The French Dispatch. Expanding upon his fondness for nesting stories within stories (The Grand Budapest Hotel, The Royal Tenenbaums, Moonrise Kingdom), it is structured as the final issue of this magazine, comprising an obituary, a travel column and three feature articles.

The obituary is for Arthur Howitzer Jr (Bill Murray), the founding editor of the magazine, who left the mid-west to establish The French Dispatch as a satellite publication of The Liberty, Kansas Evening Sun. Dedicated to bringing the world to Kansas, Howitzer is an editor with a characteristically Murray-esque deadpan wit. There’s a “No Crying” sign above his door and his editorial dictum is to “Just try to make it sound like you wrote it that way on purpose”. Howitzer’s will stipulates that the magazine cease publication upon his death, and his eclectic staff of expatriate journalists, illustrators and copy editors gather to put the final issue to press. 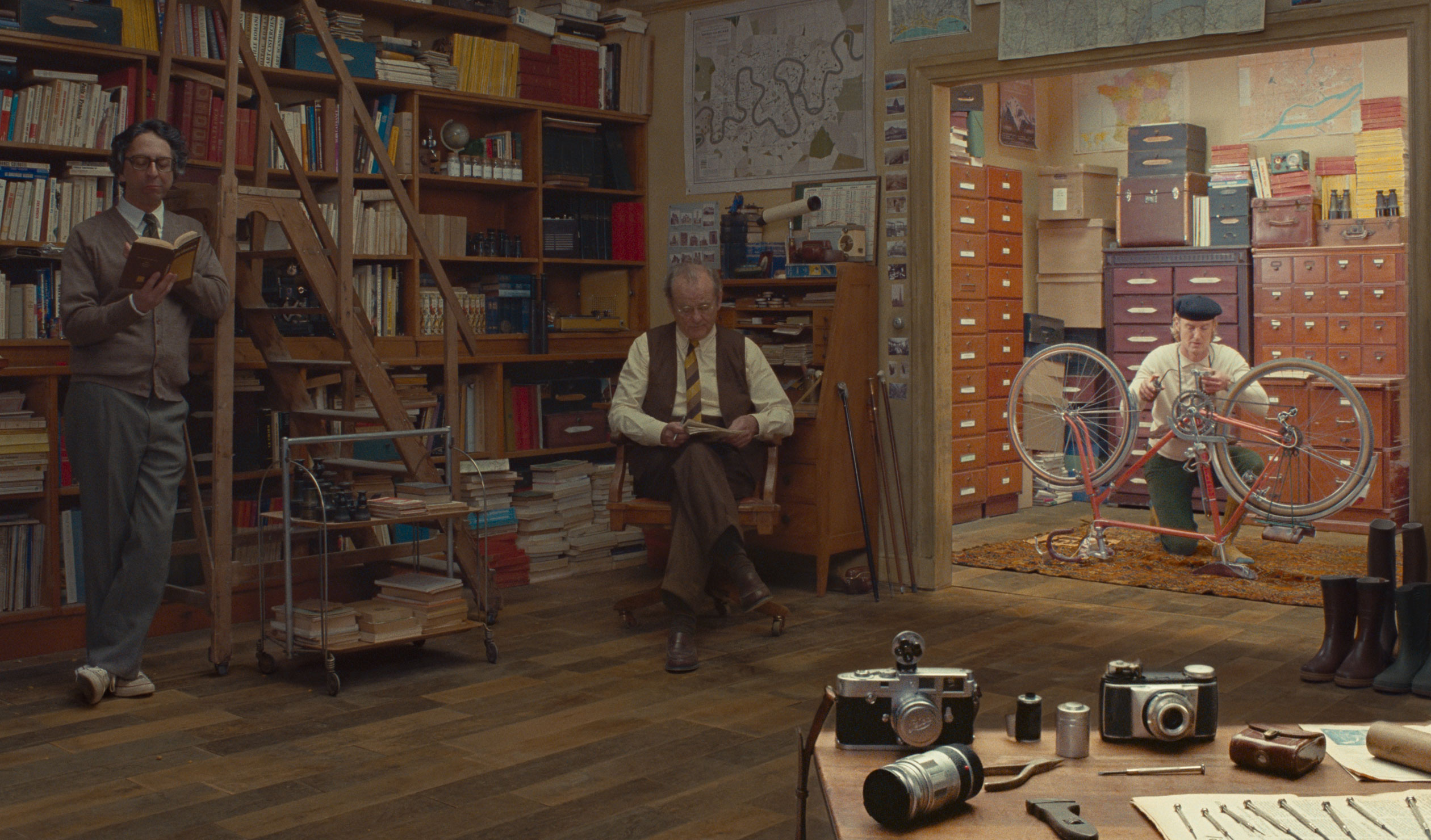 The travel article is penned by “cycling reporter” Herbsaint Sazerac (Owen Wilson), who anchors the film within its French setting with a colourfully droll commentary on the seedier side of Ennui-sur-Blasé’s history.

This swift local-colour piece is followed by the first feature-length article, “The Concrete Masterpiece”, written by art correspondent JKL Berensen (a feisty and toothsome Tilda Swinton). Again, Anderson nests this story within another, framing the tale within a lecture Berensen is presenting at a Kansas art gallery. 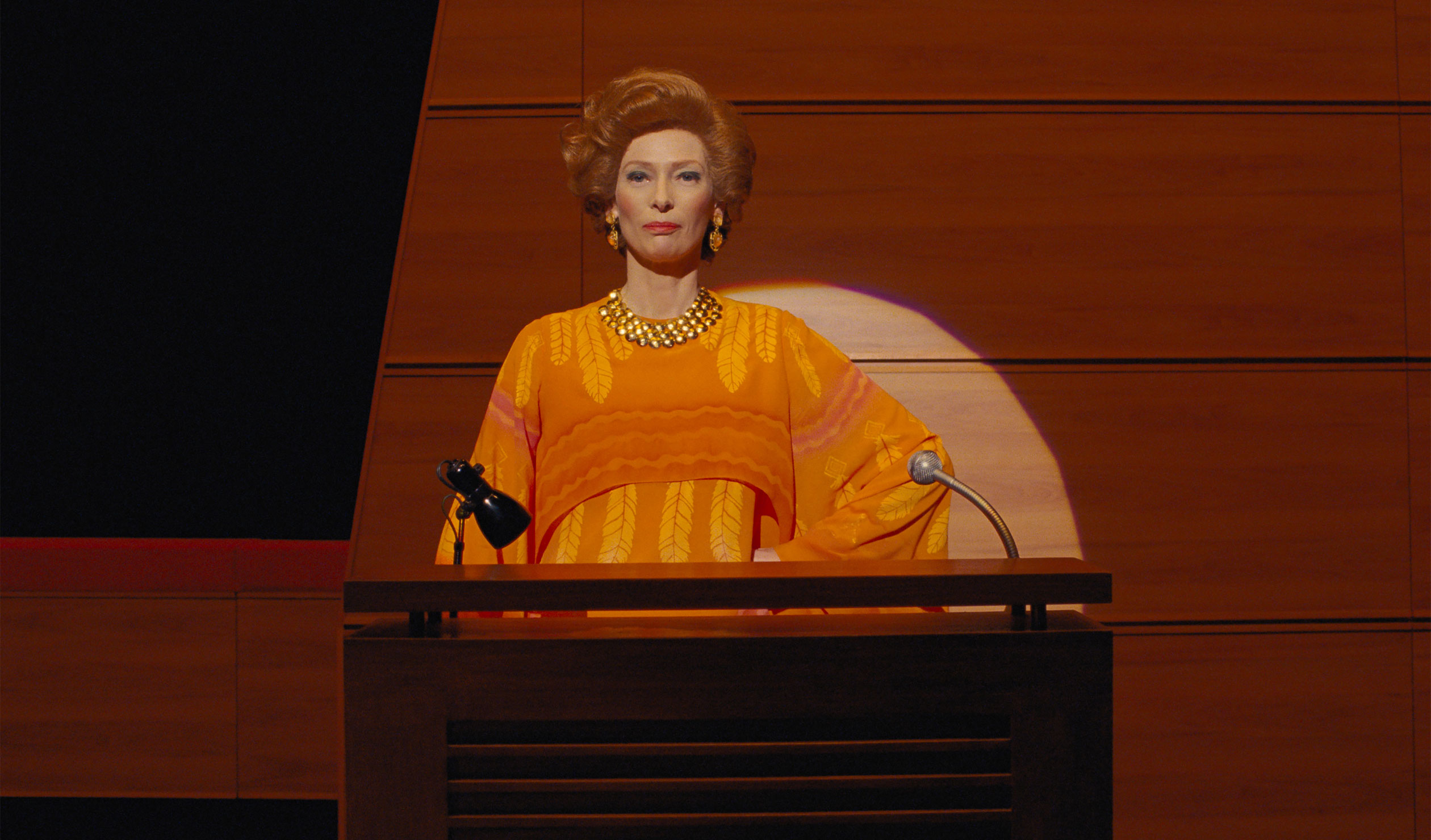 The next article (in the politics/poetry section) is “Revisions to a Manifesto”, a whimsical take on France’s May 1968 uprising, written by Mavis Gallant-style essayist Lucinda Krementz (Frances McDormand). While pondering the merits of maintaining journalistic neutrality, Krementz surprises chess master and revolutionary Zeffirelli (Timothée Chalamet) in the bath. The youthful radical is taking a stand against imperialism in the form of demanding access to the girls’ dormitory and as the conflict with Ennui’s authorities escalates, Krementz undertakes some post-coital editing of Zeffirelli’s manifesto.

The third feature is “The Private Dining Room of the Police Commissioner”, by food correspondent Roebuck Wright (Jeffrey Wright), evoking the memory of James Baldwin. This time the narrative is framed as a TV interview with Liev Schreiber in which Wright recounts how his profile of the famous chef Nescaffier (Stephen Park) devolved into a hostage situation. During a dinner party, the son of the Police Commissaire (Mathieu Amalric) is kidnapped by a gang of thugs and showgirls (including Edward Norton and Saoirse Ronan) who demand the release of underworld accountant “The Abacus” (Willem Dafoe). The story includes a glorious animated chase sequence evoking vintage New Yorker cover art and the work of Belgian cartoonist Hergé’s The Adventures of Tintin at the same time as marking an evolution in his remarkable history with stop-motion animation (The Fantastic Mr Fox and Isle of Dogs).

The French Dispatch is the filmic equivalent of a short story collection and makes for a vertiginous ride. It is packed with a cavalcade of familiar faces, and the cast gives the delectable and eccentric performances we expect from an Anderson ensemble.

Arguably, no filmmaker has a more distinctive visual style, and the effect of these diverse vignettes combined with the director’s unique sensibility delivers the overall impression of a well-curated magazine with Anderson wearing the editor’s visor.

Lovers of his back-catalogue will delight in far more than the roll-call of regulars. Adam Stockhausen’s superb production design, with its ingenious sets and intricate miniatures and models, is alone worth the ticket price.

With story credits by long-time collaborators Roman Coppola, Hugo Guinness and Jason Schwartzman, the script has a similarly exquisite vocabulary and even more accelerated rhythm than The Grand Budapest Hotel – the film which feels most closely related among Anderson’s past works in terms of nested story structure and distinctive visual style.

It was a shame that the preview screening failed to cater to Anderson’s unusual aspect ratio, cropping the top and bottom of the frame. Hopefully, this will be rectified when the film opens this week, as the painstakingly detailed and delicious visual artistry of this love letter to The New Yorker deserves to be seen precisely as the director intended.

The French Dispatch opens in cinemas nationally this week.