Wong Kar Wai is renowned for his lush visual style, atmospheric music and non-linear storytelling, and the Mercury’s retrospective opened with the auteur’s exquisitely nostalgic evocation of 1960s Hong Kong, In the Mood for Love (2000). Set in 1962, this hypnotic tale of loneliness and longing unfolds within the tiny rooms and tight corridors of an inner-city apartment building in which two young couples rent rooms from neighbouring families.

The extraordinarily glamorous Mrs Chan (Maggie Cheung) is married to an executive whose work keeps him away on business for long stretches of time. In the apartment next door, Mr Chow (Tony Leung Chiu-wai) is a newspaper editor married to a woman who is also frequently absent.

Mrs Chan and Mr Chow find themselves living lonely and isolated existences while constantly surrounded by people, either within their bustling apartments or the crowded city beyond. The two neighbours begin a timid friendship, constantly alert to the gossip any untoward contact will provoke.

As the pair’s suspicions mount that their spouses may not be faithful, they make tentative enquiries of each other’s situations. Finally, the evidence cannot be ignored. Not only are their respective partners having affairs – their spouses are sleeping with each other.

Drawn together through shared humiliation and abandonment, Chan and Chow begin a chaste courtship, trying to understand how their spouses’ relationship started and steadfastly resisting the love blossoming between them.

The entire film is saturated with a dreamy, hypnotic nostalgia for the early 1960s. William Chang Suk-ping’s production design is unparalleled. The colours, textures, interiors and costuming are simply mesmerising. To call the visual element of this film exquisite is to undersell it. Maggie Cheung’s cheongsam collection alone is worthy of the pages of Vogue.

But In the Mood for Love’s gorgeous aesthetic is not solely attributable to the production design. Australian cinematographer and Wong Kar Wai’s regular collaborator, Christopher Doyle, created the film’s distinctive atmosphere using cropped views of crowded apartments and passageways, and fractured images shot through doorways and windows. Cleverly, the cheating spouses are never fully revealed, always glimpsed from behind or partially obscured. This cramped atmosphere in which the protagonists’ thwarted love, loneliness and regret play out is poetic, visceral and set to an achingly beautiful soundtrack. 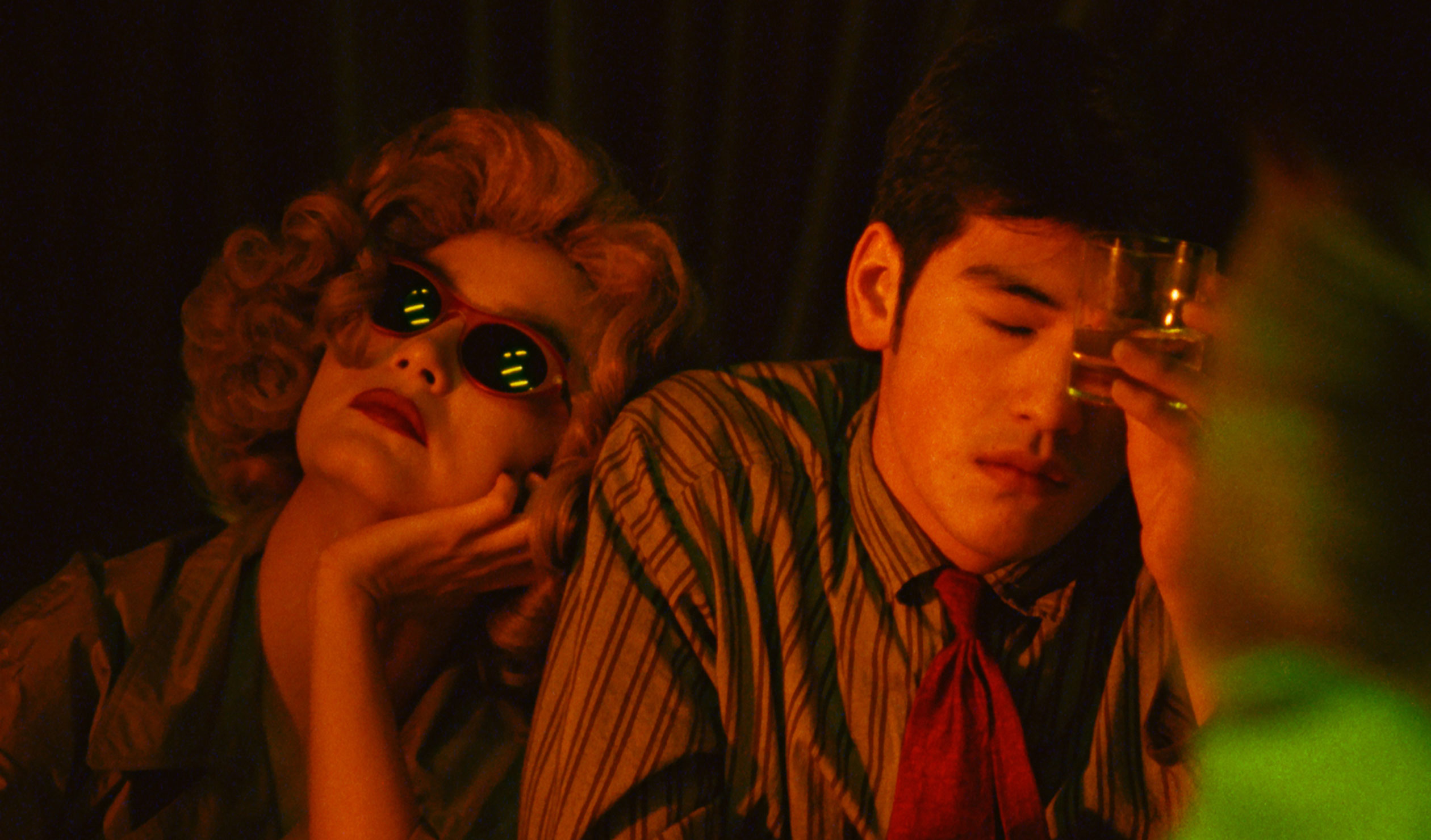 Chungking Express: Much of the film’s charm is held in the characters’ quirky inner dialogues.

Also showing as part of Love and Neon is Wong Kar Wai’s cult classic Chungking Express (1994), in which the auteur’s distinctive vision of Hong Kong’s urban space, crowded city living and 1960s nostalgia is once again front and centre.

Despite this film’s contemporary setting, hand-held camera work, fast-cut editing and bifurcated narrative, Chungking Express is as distinctively part of Wong’s unique cinematic universe as the slower-paced melodrama of In the Mood For Love (2000).

The opening story is set in downtown Kowloon, around the gritty and labyrinthine tenement Chung King House. A heart-sore young cop (Takeshi Kaneshiro), desperately hoping to rekindle his romance with an ex-girlfriend, unexpectedly crosses paths with a glamorous drug dealer (Brigitte Lin). She also happens to be in a desperate situation, but for very different reasons. The dealer careens through the subterranean levels of the city in a blond wig and designer shades, hunting for the drug mules who double crossed her.

The second story in Chungking Express, nominally connected to the first by the Hong Kong Island fast-food joint Midnight Express, also centres on the romantic life of a young cop (Tony Leung Chiu-wai). A regular at the fast-food joint, he becomes the unwitting fixation of an ethereal and eccentric worker (Faye Wang).

Frenetic, colourful and set to a soundtrack perfectly matched to its visual energy, much of the film’s charm is held in the characters’ quirky inner dialogues. While this sounds a world away from the hypnotic pace of In the Mood for Love, the colour, music, crowded spaces and tender exploration of romantic longing place it squarely in Wong Kar Wai’s wheelhouse.

As an opening taste of Wong’s unique directorial aesthetic, these two films proved a perfectly curated appetiser. This retrospective is a rare chance to view the back catalogue of a director who has proved a major stylistic influence on contemporary cinema. To see these gorgeous films on a large screen is an opportunity not to be missed.

Chungking Express is screening again at the Mercury Cinema on Thursday (October 21) and In the Mood for Love screens again on Friday (October 22). The full program of Love and Neon screenings and other films showing at the Mercury during OzAsia Festival can be viewed on the OzAsia website.