Director Rubika Shah’s White Riot is a documentary about what began as a response to Clapton’s offensive comments and his chanting of the National Front slogan “keep Britain white”.

“Who shot the Sheriff, Eric? It sure as hell wasn’t you!” rock photographer Red Saunders wrote in an open letter to New Musical Express magazine, referencing the Bob Marley song that Clapton covered and took to number one.

At the end of the letter, Saunders called for a movement of musicians and their fans to fight racism and the growing power of British ultra-conservative leader Enoch Powell, and to call themselves Rock Against Racism.

It worked. The Clash, Steel Pulse, Sham 69, Poly Styrene, Alien Kulture and Tom Robinson were only some of the musicians who joined forces with Saunders and his activist mates, with the fanzine Temporary Hoarding the proactive result. 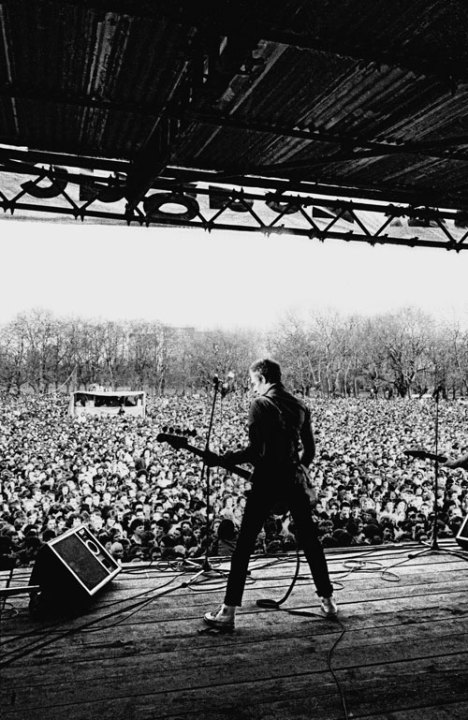 Paul Simonon of the Clash at the Rock Against Racism concert in London in 1978. Photo: Syd Sheldon/White Riot

The movement organised concerts that culminated in interracial jam sessions, a put-your-money-where-your-mic-is ideology; bands carried anti-racist placards (well, stood by them, according to the photo) for all of Britain to see.

Thousands of letters of support came in and teens across the British Isles were representing their districts in the Rock Against Racism movement. Soon, it grew beyond the UK and all around the world the punk youth culture was getting political.

This is writer-director Shah’s first feature-length film, having been adapted from a short that toured the festival circuit. There are fast-paced close-ups of photos and text from the zine, along with black and white gritty animation overlaying the talking heads, so the doco feels both grassroots and punk-rock-inspired. But is it punk enough?

Although primarily about the movement as told by its founders – Red Saunders, Roger Huddle, Kate Web and others – at 81 minutes, there’s enough room for Shah to have gone further into the motivation of the musicians.

At what moment did Joe Strummer feel that racism had gotten out of control? What was his upbringing and where did he come from and did any of those things influence his activism?

Many of the film’s viewers will be punk fans and exploring the motivation behind their heroes’ actions could have forced the film to go deeper and louder.

Interestingly, Shah has plans to expand her short doco on David Bowie, another musician who made comments in the ’70s saying that Britain could benefit from a fascist leader, although he later renounced them.

Is there a theme happening here? Let’s hope so, because in this day and age, we need to see the mistakes of our past to understand why it’s still happening. Brexit, Trump, Kid Rock (lol) – almost 50 years later and you’d swear some of the footage from White Riot was taken in 2020.

White Riot screens again on October 24 at the Semaphore Odeon as part of the Adelaide Film Festival, which continues until October 25. Read more previews and stories here.