Seth Larney has wanted to make films since he was five years old and saw the 1986 sci-fi movie Short Circuit, featuring a robot called Number 5 that gained human-like intelligence after being struck by lightning.

“I asked my dad where they got it from and he said they made it,” Larney tells InDaily.

“It was like a bolt of lightning had hit me. I thought: Is this something that’s possible?

“It moved me so much, even as a five-year-old – just the endless possibility of storytelling; [the idea] that we can create worlds that take can us away.”

Throughout his boyhood, he was equally fascinated by other early sci-fi movies such as 2001: A Space Odyssey, Soylent Green and Logan’s Run – films, he says, that were “fun genre rides but ultimately at the core of them were thematically based, talking about big questions like: What is our place in the universe?”.

It’s notable, also, that young Seth watched these films on a seven-inch black and white TV that ran off a car battery.

The family home, a wooden hut built by his father, was off the grid in a forest in Grafton, New South Wales, which meant that alongside his love of science-fiction films, he also grew up with a passion for the natural environment.

It’s really about the question: Can we change our fate?

As an adult, Larney has worked as a visual effects specialist and contributed to films such as The Matrix Reloaded and X-Men Origins: Wolverine, as well as directing Malaysian action movie Tombiruo, award-winning short films The Clearing and Roman’s Ark, and Foxtel series Hipsters.

Now, his new feature film 2067 – set to open the Adelaide Film Festival on October 14 – reflects both his early influences, telling the story of a future Earth on the verge of collapse due to the impact of climate change.

Written and directed by Larney, the film is set in the year 2067, when plant life has become extinct and humans are forced to rely on synthetic oxygen which is now making them sick. Reclusive utility worker Ethan Whyte (played by Kodi Smit-McPhee) is transported by a quantum time machine to “a terrifying new world” 400 years into the future on a mission to seek a solution to the oxygen crisis and also save his sick wife.

For Larney, who fears that deforestation and climate change will mean future generations are deprived of the access to nature he enjoyed as a boy, the film is an opportunity to encourage a conversation among audiences.

“I believe movies are for audiences, so ultimately they should fun, but I think audiences who are up for deeper engagement can be given the challenge of bigger questions,” he says.

While he has drawn inspiration from the character-driven adventures he saw on screen when he was younger, more recent sci-fi films such as Moon, 12 Monkeys and Arrival are also key references.

Larney cites Arrival, the 2016 movie starring Amy Adams as a linguist who works with the military to communicate with aliens after mysterious spacecraft appear on Earth, as one of his top five films.

“Arrival presents itself as an alien encounter movie but really it’s about these simple human themes: ‘Would we make the same decision if we were presented with a second chance?’

“It’s the same with our film. It’s really about the question: ‘Can we change our fate?’.” 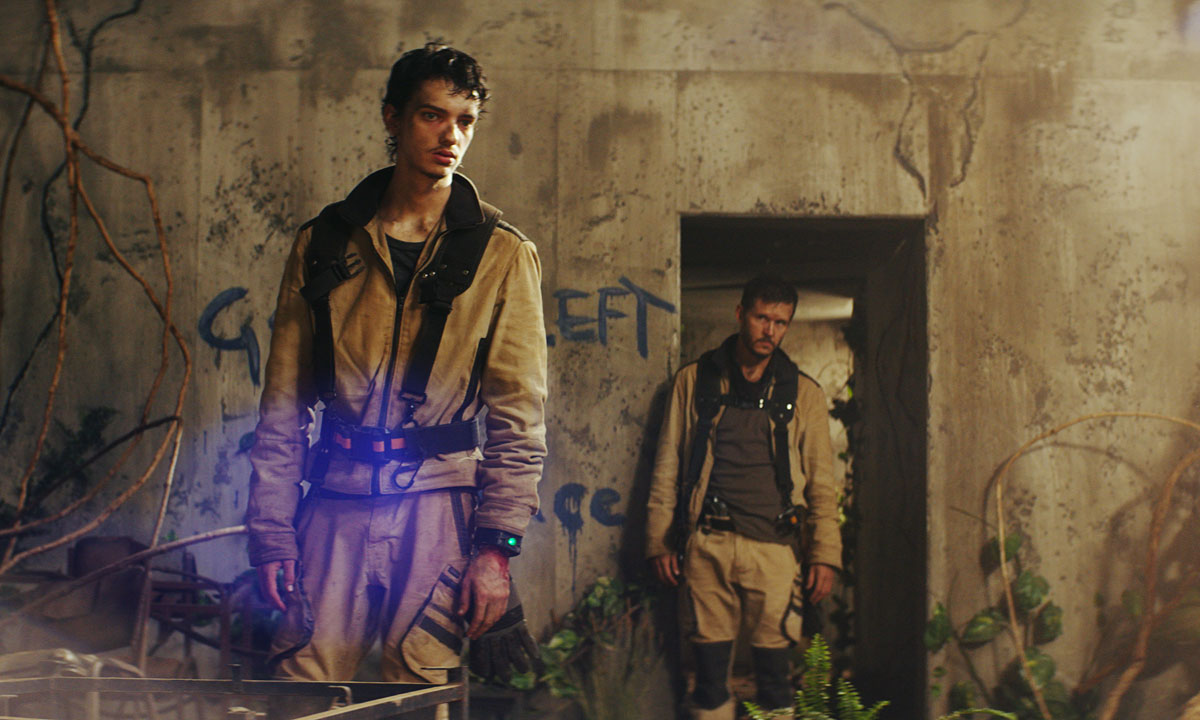 A scene from 2067, which is set in a future where Earth has been ravaged by climate change.

He wanted 2067 to have a protagonist the audience could relate to, and says Smit-McPhee (previously seen in films such as The Road and X-Men: Apocalypse) embodies the character of Ethan, who is forced to dig into his family’s mysterious past during his quest.

The thriller also stars Australian actors Ryan Kwanten, Deborah Mailman and Damian Walshe-Howling. It was produced by Lisa Shaunessy (Killing Ground) and Kate Croser (now CEO of the South Australian Film Corporation), and supported by the Adelaide Film Festival Investment Fund and the SAFC, with filming taking place in Adelaide.

The easing of COVID-19 border restrictions mean Larney will be here for the Adelaide Film Festival gala screening, which he says will be a special moment for the filmmakers, especially since so few festivals have been able to go ahead due to the pandemic.

“That the ideas explored in the film speak to the moment we find ourselves in as a species is what I look forward to sharing with audiences on a whole new level than we had anticipated during the making of the movie.”

The 2020 Adelaide Film Festival will open next Wednesday with a special gala screening of 2067, with further screenings on October 17 and 20. The festival continues until October 25.