The new biopic, directed by Unjoo Moon, begins with Reddy’s arrival in New York in 1966 and follows her rise to fame in the music industry, including the release of “I Am Woman”, the power anthem inspired by her friendship with rock journalist Lillian Roxon (played by Danielle Macdonald).

The film was made with the support of the Adelaide Film Festival Investment Fund, and ahead of its launch on streaming service Stan on August 28, the festival is presenting Australian premiere screenings at three SA cinemas this weekend (details below).

Here, Cobham-Hervey shares some surprising things she learned about Reddy while making the film, her experience of meeting the singer and her family, and why she thinks I Am Woman is a film for the time.

You’ve said previously that you became obsessed with studying everything you could about Helen while making the film – what’s one fact you learned that most surprised you?

She is so fascinating that it is hard to choose just one. I was quite surprised to learn about her experiences with astral projection and how after she left showbiz she went on to become a hypnotist.

I think the other thing that constantly surprised me was her incredible determination, despite the difficulties she faced. It is so easy to look at people in the public eye and see them as something other, like they just arrived into the world famous, but Helen worked so incredibly hard to get where she is.

She arrived in New York City when she was 23 years old, with her three-year-old daughter, $230 and one suitcase, and five years later she became the first Australian to win a Grammy. That is truly mind-blowing to me!

What type of research did you do to help you understand both her life and the challenges she faced as a female artist in the 1960s and ’70s?

I read her memoir, studied all of her interviews and performances, and spent a lot of time researching the women’s movement in the ’60s and ’70s. Director Unjoo Moon had also spent a lot of time with Helen and her family and was able to provide really brilliant stories and details about them that were hugely informative.

Despite the generation differences, are there things the two of you have in common?

Helen and I both grew up with parents in the arts. Helen’s parents were vaudeville stars and also had their own radio show. Growing up, my mother was a dancer and my father was a lighting designer, so I also spent a lot of time on the road and in the back of theatres.

Like Helen, I am also very driven and love what I do. Helen is a bit of a dag. I say that with absolute love and admiration, and I definitely identify as a dag, too. She loves a laugh and never takes herself too seriously.

There are also a lot of differences between us. She is definitely a little braver and ballsier than I am. It was a lovely gift to explore some of her confidence and I think throughout the shoot some of it stuck, which I am very grateful for. I think I would like to be Helen when I grow up.

Making a film inspired by a real person – especially someone who is still alive – comes with unique challenges. What was the most difficult thing to nail?

It is a huge responsibility. Helen is such an extraordinary woman and artist, so stepping into her shoes was rather daunting. Even though we are both Australian, I found her speaking voice quite hard to nail. She has such a particular cadence, and perhaps because it was not so far off my own voice it was harder to perfect.

Did you have a chance to meet Helen or her family?

I met Helen a month after we wrapped the film at an event in LA that was honouring her with a lifetime achievement award. I actually had to perform a speech about her before I met her, which was incredibly nerve-racking!

After spending so long studying her it was quite surreal to meet her in person. She was so charming and cheeky and generous. It was so nice to have the chance to tell her how much she meant to me.

We also got to get up on stage and sing “I Am Woman” together with her daughter Traci and her granddaughter Lily. I will never forget that. I had met Lily and Traci during the shoot, as Lily performs a beautiful song in the film. No matter how many times we filmed that scene, every time she started to sing I would cry! She has such a beautiful voice. 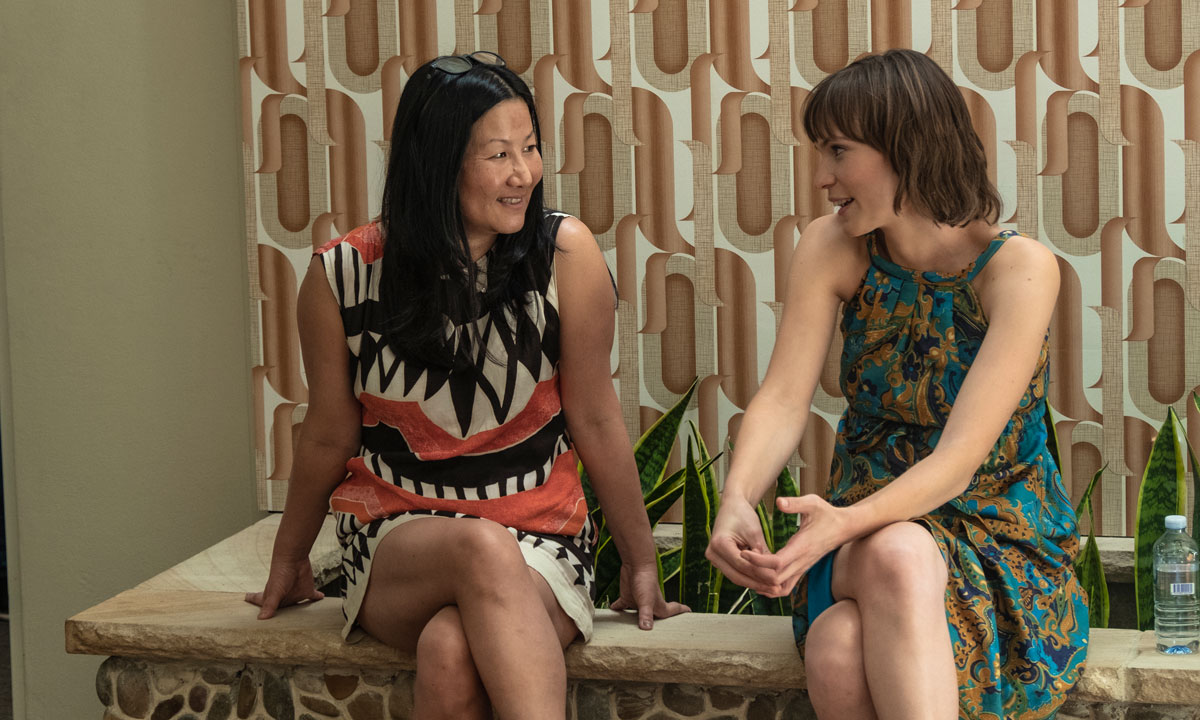 Director Unjoo Moon has said this is a film for the time – do you agree?

I think this film will always be relevant. It is so important to look back and celebrate all the women that came before us. The women that fought for our rights and shaped the world we live in today.

We are currently living through a very unique time. This pandemic has forced us all to pause and reflect on our lives, our past and what we hope for our future.

I have spent the last six months in America watching the incredible galvanisation of the Black Lives Matter movement. It breaks my heart that we live in a world where people have to march in the streets to demand equality, respect and basic safety.

I think this time is forcing us all to start questioning the structures and systems that are dividing people, whether that be through race, wealth, gender or sexuality. Equality is a basic human right and that extends beyond the rights for women.

We only grow as a people through dialogue and diverse ideas, through deep collaboration, respect and empathy for all people. I hope that this strange time will encourage us all to look back at people like Helen and be inspired by their courage to do our bit.

Helen’s story is incredibly hopeful. Her talent, bravery and determination is incredibly inspiring, and I think we could all do with a bit of hope and inspiration right now

What projects are you working on now?

I am currently working on two screenplays. I am adapting a book with Closer Productions called Irma Voth, written by Miriam Toewes, and I am also co-writing Sheila, a film based on Robert Wainwright’s biography of Sheila Chisholm.

When I get out of quarantine I will also get back to the very important task of perfecting a lemon tart.

Adelaide Film Festival will present I Am Woman in screenings at 7pm on August 22 and 1pm on August 23 at Palace Nova East End, Palace Nova Prospect and Wallis Mitcham cinemas.  A recorded Q&A with Unjoo Moon and Tilda Cobham-Hervey will also screen at each cinema.