In our fractured, cynical, egocentric era, do we really believe that such love between two people is possible? Do we hang on to a desperate hope that we just might be lucky enough to experience it?

Of course we do.

The Oscar-nominated film Cold War sounds pretty bleak and chilly, but it is one you shouldn’t miss. It is set in Warsaw after World War II, where the Communists are trying to invent a new culture based on the glorious melodies of Polish folk tunes.

Wiktor (Tomasz Kot), an accomplished pianist and conductor, is tasked with auditioning talent for the choral ensemble which will be used as Communist propaganda. Zula (Joanna Kulig), a beautiful talented young woman with a questionable past, attracts his attention, and not just for her singing ability.

So begins the passionate love affair, which – despite all their broken promises, betrayals, splitting up and coming back together – lasts their entire lives.

Polish writer and director Pawel Pawlikowski has named the characters after his parents, whose own passionate, stormy relationship lasted more than four decades.

The film is in beautiful black and white, with stunning tableaus where no one speaks and the music conveys the emotion.

I began to think I was watching an opera, so heightened is the emotion the film evokes; this is a soundtrack you will want to play over and over again. Perhaps Cold War is the beginning of a new blending of genres, just as the novel has merged into a blending of fiction and non-fiction.

There is a tragic yearning in the film for the kind of love we all secretly hope we will experience sometime in our lives before we die.

This same yearning was palpable in the live filming of the New York Metropolitan Opera’s new production of La Traviata (presented at Palace Nova as part of the Met Opera series). This is not just a static film of a well-worn opera written by Verdi and first performed in the 1850s; the performance was beamed live to more than 70 countries, seen by more than 300,000 viewers with the best seat in the house. 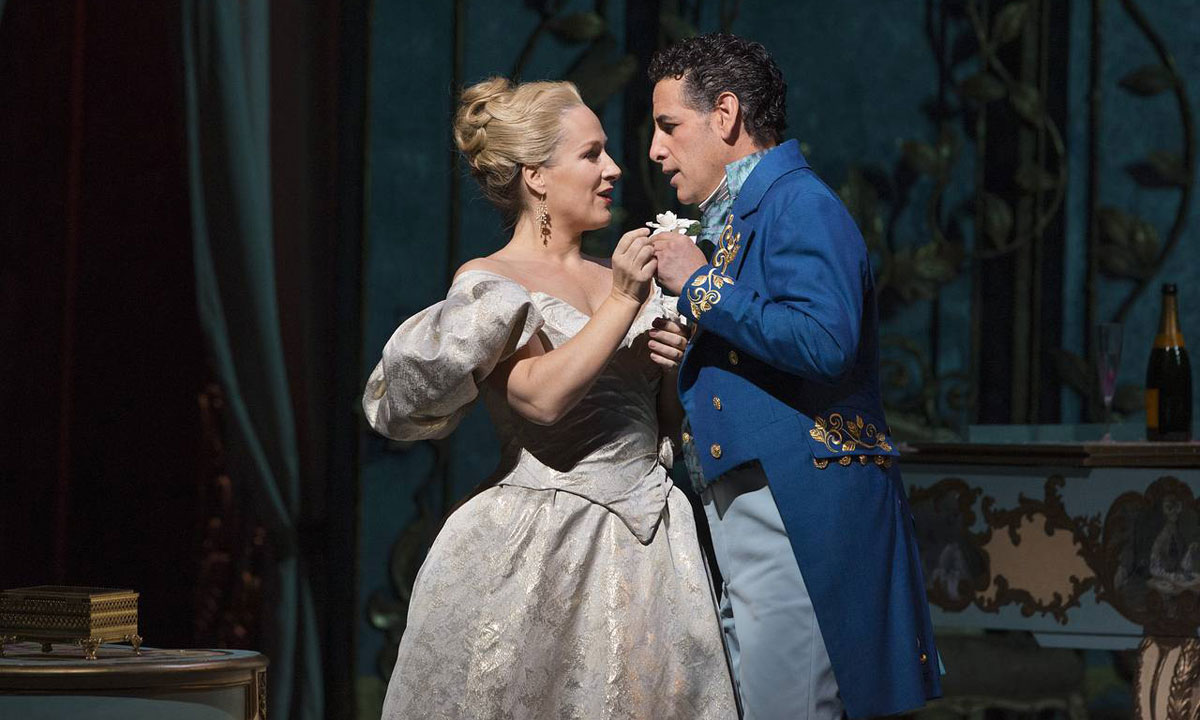 We not only experience the close-ups of the singing and acting of the opera, but in between the acts we are party to conversations between the singers, directors and conductor, and watch as the set is prepared for the next act.

The effect is exhilarating and intimate. And cheaper than having to travel to New York.

Once again, the story is based on two mismatched lovers. Once again, we are forced to ask ourselves: What would we sacrifice for this overwhelming passion?

La Traviata means “Fallen Woman” in English, and Violetta (Diana Damrau) is a courtesan who has chosen a life of freedom and pleasure, untrammelled by the ties of deep love. When confronted by a chance to experience real love with Alfredo (Juan Diego Florez), she secretly sells all her property to finance their life in the country.

While Alfredo is away, his father confronts her with the reality of what their love will do to ruin Alfredo and his sisters’ bourgeois life, so she unselfishly agrees to give him up. It is only when she is dying that both Alfredo and his father visit her, full of remorse and guilt. Violetta dies engulfed by the euphoria that their love for each other has survived it all.

Once again, in this blending of genres, we are swamped with gorgeous singing and luscious music. Once again, the storyline is as relevant today as it was when it was first premiered.

This rest of this season of operas filmed live from The Met promises similar blending of genres and relevance, and you should give them a try.

Swoons are great for lifting the spirits, so when the outer world makes you despair, choose to see something that will feed your inner world. Choose to experience something that makes you thankful to be fully alive with human feeling.

Dr Susan Mitchell is a film critic, an author, and broadcaster.