I went into C’est la Vie knowing nothing about the film, except that its writer-directors Olivier Nakache and Eric Toledano had produced an incredible piece of French cinema with their 2011 work, Les Intouchables.

Like Les Intouchables, Nakache and Toledano’s newest film is an undemanding and decidedly simple feel-good comedy that centres on the importance of relationships and getting along.

C’est la Vie follows disgruntled event planner Max (Jean-Pierre Bacri), whose team of incompetent staff bundle through hosting an over-the-top wedding at a glamorous French chateau. From there emerge multiple sub-plots centred on each character’s ambitions and personality faults. As the film progresses, these subplots grow tighter and more inter-connected, resulting in a finale of grand proportions.

At its core, the film follows the classic comedy structure of everything that can go wrong, goes wrong. Characters bicker between each other, there are problems in the kitchen, and it turns out the bride is the long-lost love of one of the waiters.

As stressful as this may sound, Nakache and Toledano balance plot tension and light-hearted humour well to keep the audience engaged and laughing until the end.

Bacri is a brilliant actor, switching with ease from tenderness to humour and then anger. He is backed by a stellar cast, who all refrain from over-acting their characters’ shortcomings.

While the plot is deceptively simple, Nakache and Toledano go all-out on the film’s cinematography.

In one particularly poignant scene, the groom floats above the wedding guests aided by a giant balloon. As ridiculous as this may sound, the directors turn it into a visually stunning moment, complete with slo-mo, varied camera angles and hauntingly beautiful music. I was left laughing at the comedy of the scene, while prickled by goose bumps at its emotive and captivating quality. 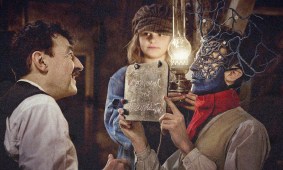 Film review: See You Up There

C’est la Vie’s one shortfall is a disconnect between Max’s character at the beginning and end of the film. We meet him speaking to two clients about their upcoming wedding. Annoyed at their constant attempts to lower the price, he becomes unreasonably angry, mocking what he believes to be their stupidity at wanting to cut back on costs. This creates a dislike for his character, although he is later portrayed as a compassionate and generous man. Unfortunately, this character development becomes lost, creating a sense of developing confusion rather than admiration.

Although C’est La Vie doesn’t quite reach the heights of Les Intouchables, it is a quality comedy in its own right, providing just under two hours of well-intentioned laughter and feel-good vibes.

C’est La Vie is screening at Palace Nova Prospect and Palace Nova Eastend as part of the Alliance Française French Film Festival, with screenings on various dates (including tomorrow, Saturday and Sunday) until April 14.

Click here to read InDaily’s review of French Film Festival movie See You Up There.