Faces Places – or Visages Villages in its native tongue – is a celebratory documentary from veteran filmmaker Agnès Varda and her cheeky compatriot JR.

It won the 2017 L’Œil d’or documentary prize at Cannes Film Festival, garnering critical praise for its understated musings on mortality, memory and l’amour. Best of all, the intergenerational duo makes for delightful company.

Small of stature but brimming with sass, Varda is a firecracker auteur just shy of 90 years old. Known for classic French titles such as La Pointe Courte and Cléo de 5 à 7, she kick-started La Nouvelle Vague by melding fiction and documentary techniques to examine the human condition (on a shoestring budget).

Signature themes like existential reflection and the role of women in western culture crop up throughout Varda’s filmography, including in Faces Places.

Here she’s joined by JR, an enigmatic street artist and photographer who reportedly dislikes both labels. The 30-something whipper-snapper is renowned for pasting up gigantic, black and white photo portraits throughout Europe and beyond.

Perhaps there’s something in the Seine because, like Varda, his work is deeply concerned with life, death, temporality and humanity.

So, with a slight “odd couple” vibe, they set off across France. Balancing humour and pathos, Varda and JR invite farmers, factory workers, a postman, a miner’s daughter and more to take part in a mammoth street art project.

Cruising through provincial towns in a Polaroid camera on wheels, Varda and JR explore the significance and functionality of villages in contemporary France. What’s it like to experience time, space, nature and mateship outside the City of Light?

From each town, Varda and JR dispatch little video vignettes – like moving image postcards – commemorating the installation of their soaring portraits. In between, the artists ruminate on times passed and the passing of time; exchanging memories and making new ones in the bucolic surrounds.

For a film about ageing (and its final destination), Faces Places keeps a rollicking pace. Sure, Varda’s not quite as spritely as her travel companion, but the pair packs a bunch of sightseeing and philosophising into the film’s 90 minutes.

The transition from analogue to digital media influenced both Varda and JR’s respective work. In Faces Places, they flit between both disciplines, taking digital photos that emerge in print from the side of their mobile photo booth, or pasting skyscraper-high stickers onto shipping containers.

In doing so, Varda and JR capture a bittersweet exchange between the tangible and ephemeral – and what’s the point of photography if not to render a fleeting moment more permanent?

Prior to working as a film director, Varda herself was a consummate photographer. She brandishes examples of her early work throughout the film, and they really are stunning. It’s heartwarming to see her partake in children’s selfies, too, fostering a love of photography in budding young artists. 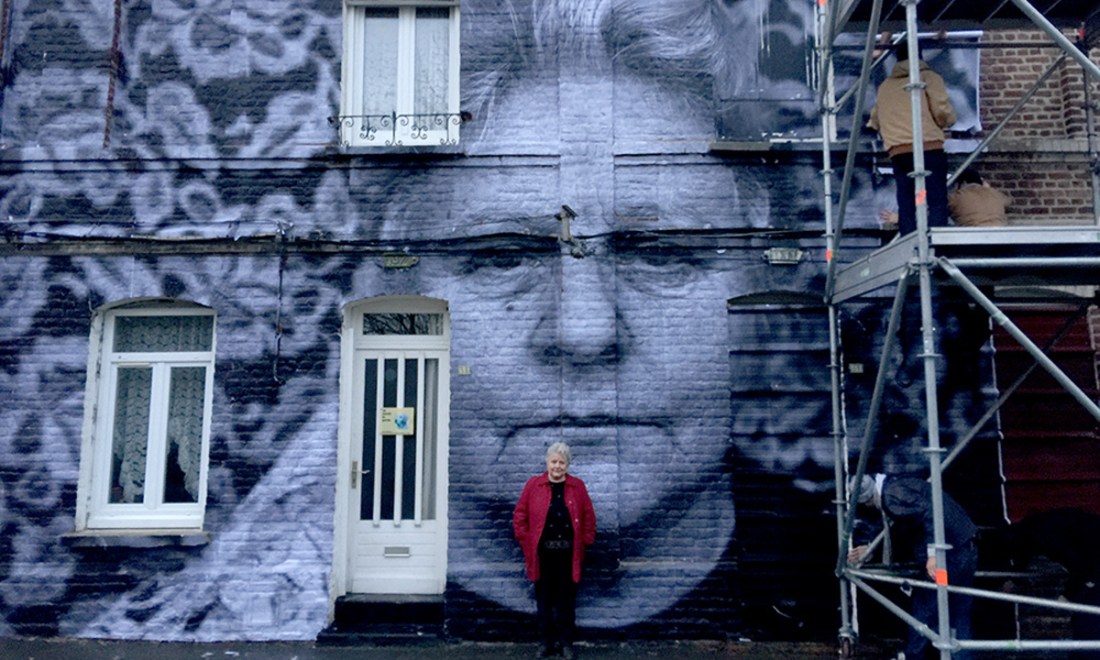 Similarly, Varda – who’s about to receive an Academy Honorary Award for lifetime achievement – is also passing a torch to her stand-in grandson, JR. With her diminishing eyesight and reduced mobility, this could be her last cinematic hurrah. In accepting her mortality on screen, the pair upholds a great French New Wave tradition: infusing reality with the artifice of film.

The emotional mechanics of visual media have a starring role in Faces Places. There’s a striking scene in which Varda and JR discuss shot composition while directing a small-town waitress modelling in their shot. The precision with which they position her eyeline, her parasol, her bare feet, suggests two absolute masters at work. It’s a privilege to watch them.

Deftly aware of the tightrope walk that is visual storytelling, Varda and JR show how pictures shape and manipulate us; how moving images reveal traits that static photographs can’t, and vice versa.

At times, both artists play heightened versions of their true selves. Some of their off-the-cuff exchanges feel scripted and self-conscious, but their adoring rapport is truly real. It’s produced an affecting film about remembrance, empathy and enduring friendships.