His last film, Pacific Rim, was awful. It was hard to tell whether any semblance of a plot was focus-grouped out of it by Hollywood executives during the production process, or whether it didn’t have one to begin with.

From the casting and veil of secrecy surrounding his latest project, Crimson Peak seemed promising. Unfortunately, the film is a mess. Perhaps a beautiful one, but a mess nevertheless.

Set in the late 1890s, it stars Australian actress Mia Wasikowska as Edith Cushing, an aspiring writer who is initially reluctant to marry and conform to the expectations of women of her time. This, of course, changes when British aristocrat Thomas Sharpe (Tom Hiddleston) appears on the scene seeking funding from her father (a wealthy banker in America) for a clay mining project.

It should also be mentioned at this point that Edith sees ghosts and has since she was a child.

Accompanying Thomas to America is his cold-as-ice sister Lucille Sharpe (Jessica Chastain) and it’s clear that the two are up to something sinister. When Edith’s father dies under suspicious circumstances, she marries Thomas and the three of them return to the Sharpe family manor in England, leaving behind Edith’s childhood sweetheart, Dr Alan McMichael (Charlie Hunnam).

Of course, the mansion is haunted (a large section of the roof is also missing and the house appears to be sinking into the ground, but these are the least of anyone’s concerns) and so begins Edith’s fight for life. It eventually comes to light that the living members of the house pose a greater threat than the ghosts. 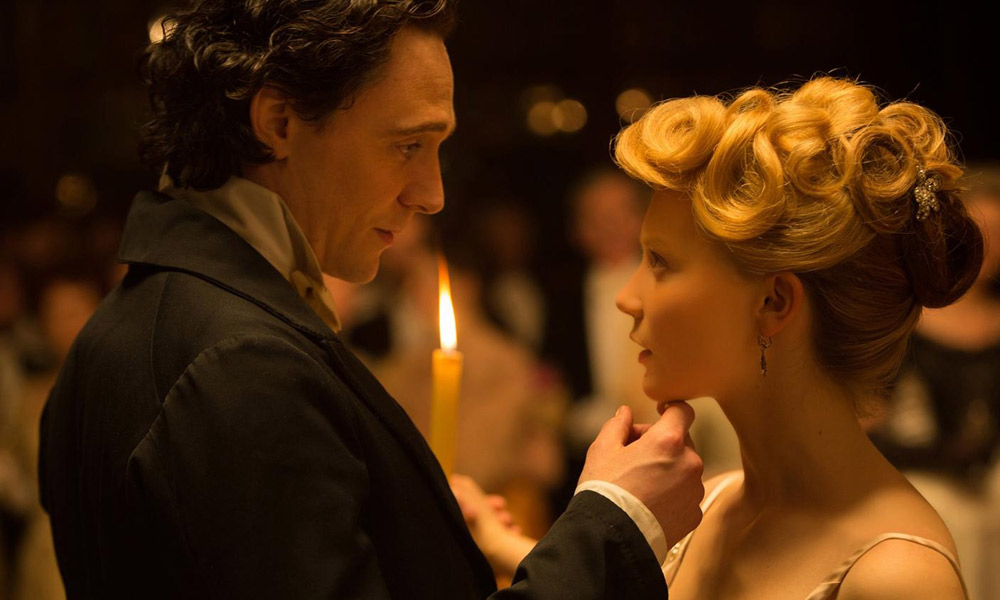 The term “heavy handed” doesn’t begin to describe this film. The dialogue is stilted and full of clichés. Some of the lines are laugh-out-loud bad. At one point, when talking with Thomas about a character in her novel, Edith says: “Characters can change” – and wouldn’t you know it, Thomas’ character begins to change in the movie! See what they did there?

The would-be revelation at the climax of the film is far less than surprising. The film is steeped in melodrama and it’s hard to believe this talented trio of actors would have signed on to the project for any reason other than money.

Crimson Peak also suffers from a terribly inconsistent tone – it’s not sure whether it wants to be a love story, a gruesome haunted house film or a PG-rated children’s romp (which it would be if it was toned down a bit).

The production and costume design are lavish, but these are really the only positives. Sadly, it’s hard to believe Crimson Peak and the masterful Pan’s Labyrinth shared a director.