Far From Men has been described elsewhere as a “western”, a reference to the familiar American genre, but it probably owes more to the Italian Spaghetti versions than anything produced by Hollywood.

The fact that David Oelhoffen’s adaptation of The Guest, a short story by Albert Camus, is set in the impossibly desolate Atlas Mountains of Algeria, North Africa, means that technically perhaps this film should be called a “northern”. It is set in 1954 at the time of the rising resistance to French rule which eventually led to bloody conflict and Algerian independence.

The central character, Daru, is a great vehicle for celebrated actor Viggo Mortensen, known for roles in films such as The Lord of the Rings trilogy and post-apocalyptic movie The Road.

Algerian born of Spanish descent, Daru is a school teacher with a military past. For reasons unexplained, he is sent to a remote school in the Atlas Mountains where he painstakingly teaches his Algerian students French and geography, in the hope they can have some kind of future.

The school is located in the centre of a huge rocky valley, miles from any sign of life. The children seem to emerge directly from the forbidding landscape to attend their classes; we never see their villages or homes.

The relative monotony of Daru’s solitary life is shattered by the arrival of the local policeman on horseback, leading an Arab prisoner, bound and on foot. Daru is told to escort the man to a nearby village, a day’s march away, to face charges of murdering his cousin.

In Camus’s original story, the man is never named, reflecting the anonymity of “the Arab” in his earlier work, The Outsider. Here he is revealed as “Mohammed” (Reda Kateb), a man tormented by honour, family troubles and extreme hardship.

Each step of their journey leads to more revelations about Daru and Mohammed’s history, and an unlikely (in normal circumstances) friendship develops as the two battle the harsh terrain and encounters with both sides of the looming conflict. 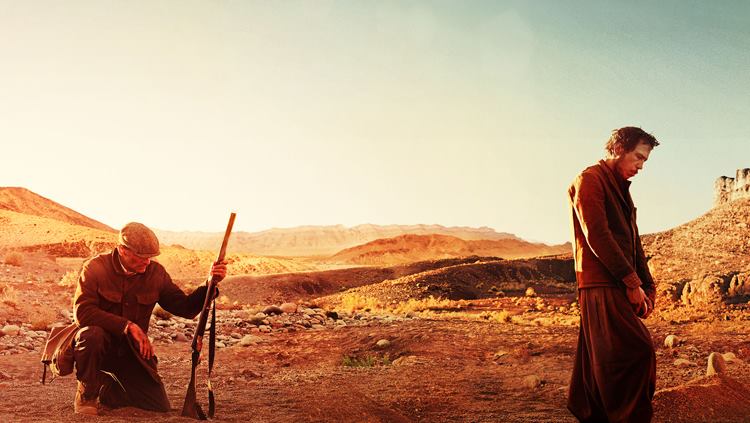 The de-humanising nature of war and its atrocities, the suspension of honorable behavior, survival at all costs and friendship created under duress are all explored in Far From Men. The inevitable need to pick a side in the conflict can’t be ignored, especially by an Algerian-born European and former French Army man like Daru.

A couple of humorous moments provide a contrast to the main action, and there is also one almighty coincidence which actually seems plausible given the nature of the conflict surrounding our two heroes.

Breathtaking panoramic long-shots compel the viewer to scan the big screen to find the ant-like figures of Daru and Mohammed as they trek across the mountains. Some scenes are shot from unusual camera angles and perspectives, to realistically present the terror and confusion of deadly battle. An original soundtrack by Nick Cave and Warren Ellis perfectly supports the visual action and intensity.

Camus’s original short story has none of this journey, being set entirely in the classroom where Mohammed stays as a guest rather than a prisoner. It was director Oelhoffen’s decision to add the epic journey and battle elements to the story, effectively inserting the hallmarks of the western genre. Thankfully, it works.

The two main characters are eventually forced to confront life-changing choices, the answers to which are in part shaped by their unexpected meeting.

There were times in this film when I thought of Hemingway, others when The Good, the Bad and the Ugly sprung to mind. I have no idea whether a sequel is envisaged, but there are enough threads of this story and its characters left open to suggest it would be a fair possibility. This excellent film is a good starting point.