Director Bill Pohlad faced a monumental task in seeking to present the story of the Beach Boys’ Brian Wilson with balance, honesty and empathy.

The fact that he achieves that goal with Love and Mercy makes it possibly one of the best music bio-pics probably ever made. This is a story of epic proportions filled with heroes and villains, genius, jealousy, an amazing love story, exploitation and, of course, brilliant music.

The Wilson role is shared between two actors who seem dedicated to the task of getting it right.  Paul Dano plays the young Brian in his early 20s as his creative brilliance is on the rise, while John Cusack takes over the part 20 odd years later as he battles with mental illness, drug abuse and exploitation by the unscrupulous Dr Eugene Landy (Paul Giamatti).

Landy is clearly the main villain of the piece, although Brian’s brutally jealous father Murray comes a close second, with cousin Mike Love perhaps more of a sceptic than a true villain.  Giamatti portrays Landy as a self-serving, evil character with no redeeming qualities.

The hero is the devoted, determined, eventual wife of Brian, Melinda Ledbetter (Elizabeth Banks), who battles to save her man from the clutches of the controlling Dr Landy.

The format shifts between the two timeframes very cleverly, offering early glimpses into the mental deterioration of a musical genius and his eventual fight back from the brink.

There are obviously drugs involved; the impact of the abusive, manipulative father cannot be underestimated, and coping with fame at an early age is another theme explored.  On top of all of this, Brian Wilson had so many musical ideas running through his head that it may have just been too much to cope with.

The soundtrack captures this amazingly well with a cacophony of ideas, instruments, snippets of eventual Beach Boys songs and half-developed sounds. 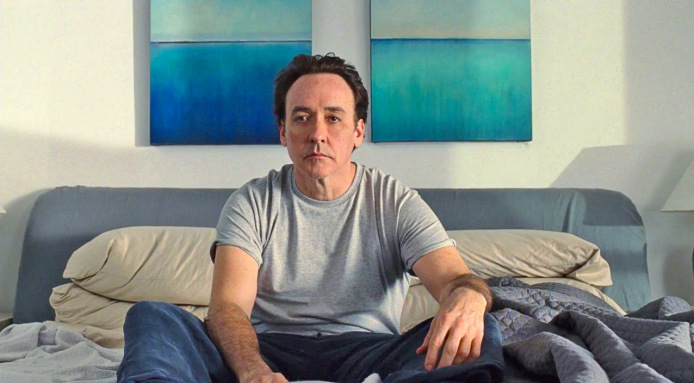 Brian’s deterioration is brilliantly portrayed by Dano, his attempt to find himself equally so by Cusack (pictured above). The latter has been quoted as saying: “No one was there for the money and no one was there for anything but trying to live up to a great American genius and a master, and tell his story in a serious way.”

The massive role of Los Angeles session musicians known as the Wrecking Crew in helping Brian Wilson to create his masterpieces “Pet Sounds” and “Smile” is acknowledged and treated with great respect.  The studio scenes are very credible (which isn’t always the case in music movies) and the early stage performances of the young Beach Boys and the creation of their video clips are also presented with incredible attention to detail.

Love and Mercy is a compelling, emotionally draining film – such is the power of its screenplay, direction and stellar performances.  I thoroughly recommend it.