It’s been 22 years since the iconic original Jurassic Park and, following the unfortunate events of the first film, enterprising businessman Simon Masrani has bought the island from John Hammond (the late Richard Attenborough) and given the whole dinosaur tourist park idea another go.

Now called Jurassic World, the park has all the high-tech bells and whistles, with the best structural engineers in the world employed to ensure the safety of visitors.

But it’s 2015 now, and audiences have grown used to dinosaurs – they’re about as exciting as regular animals at the zoo. So in an effort to create a greater buzz and generate more revenue, the park’s science gurus have created a genetically modified new species of dinosaur. The Indominus Rex resembles a T-rex, but is bigger, faster and smarter.

What could possibly go wrong?

Before unveiling the new dinosaur to the public, Masrani (Irrfan Kahn) asks icy park manager Claire (Bryce Dallas Howard) to have the security of its enclosure checked by resident dinosaur whisperer Owen Grady (Chris Pratt), who is busy with his own study on velociraptor behaviour. But when Claire and Owen go to see Indominus Rex, they discover the dinosaur has – gasp –  escaped!

Thrown into the mix are Claire’s nephews, who are visiting the park for a family weekend with their aunt, but the pair barely serve as more than plot devices. Also along for the ride is baddie Vic Hoskins (Vincent D’Onofrio), who believes Grady’s dinosaur whispering offers an opportunity to train dinosaurs to fight in wars. Yep. 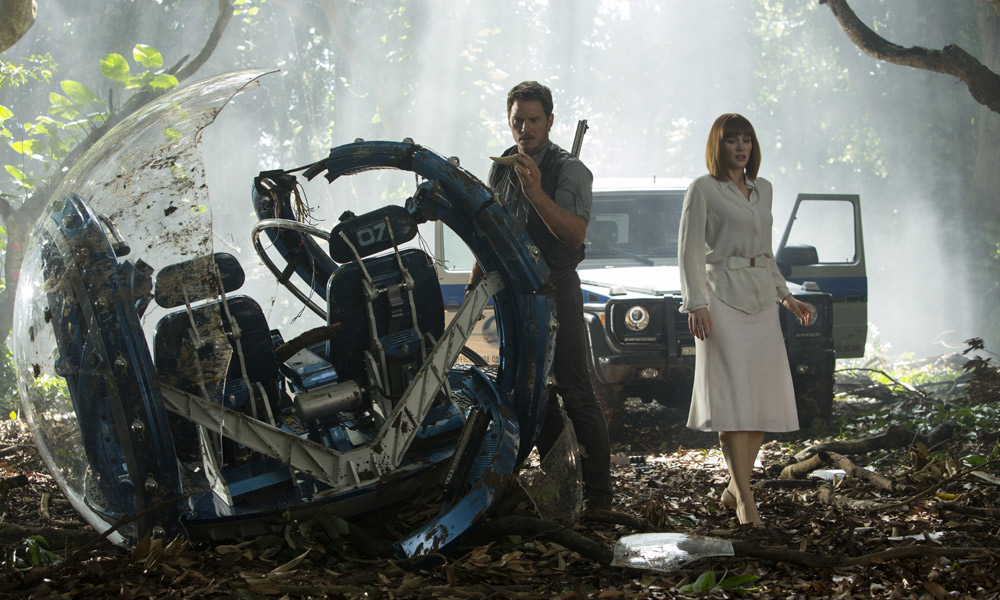 Jurassic World packs in every cliché in the book. From the kids whose parents are divorcing to the uptight lady who is subsequently taught to chill out by the roguish, carefree hero, all the tropes are here. There’s even a love story!

The script is like a fossil from the 1980s – I fully expected a dinosaur to wink at us at the end.

The genetically modified new dinosaur is the smartest being, human or otherwise, involved with this film. Steven Spielberg is obviously absent from the director’s chair this time around (although he serves as an executive producer), and Colin Trevorrow, in his place, does the best he can with the poor script.

The hilarity of Bryce Dallas Howard’s Claire running from a T-rex in stiletto heels (she unbuttoned her blouse and tied it in a knot over her camisole to make getting around the jungle easier, though – she’s not a complete idiot!) is sadly one of the highlights of the film.

It’s unclear whether the filmmakers involved were making a commentary on theme parks of this kind or not (a savvy writer would have). From everything we see of the park, it’s a cheesy place and the film suffers from that same sense of cheesy-ness. It’s clearly been made to appeal to the broadest possible audience and no doubt many will love it despite its flaws; I certainly wanted to.

If the new entry in the Mad Max franchise has shown us anything, it’s that blockbusters (and indeed sequels) don’t have to resort to the lowest common denominator – they can even be smart. Jurassic World, unfortunately, is not.