In Mad Max: Fury Road, the world is in worse shape than when we left it 30 years ago in Mad Max 3: Beyond Thunderdome and so is the titular Max (played for the first time by British actor Tom Hardy).

He’s suffering from post-traumatic stress disorder, with visions of his dead wife and daughter, and for the first time in the franchise, it feels like he earns his “mad” moniker.

In the opening scenes, Max is unlucky enough to be captured by evil dictator Immotan Joe’s cronies and taken to his kingdom of Citadel. It’s a harsh place where water is controlled by Joe and where people are property.

Imperator Furiosa (Charlize Theron), a trusted member of Joe’s army, has hatched a plan to liberate a group of captive women known as his Five Wives (Zoe Kravitz, Rosie Huntington-Whiteley, Riley Keough, Abbey Lee and Courtney Eaton) – or his “breeders” – by smuggling them out of Citadel in a petrol tanker. Max meets them along the way and what ensues is two hours of unhinged, bonkers chaos and it’s oh so refreshing.

Hardy is fine as the mumbling Max (although his would-be Australian accent sounds like a mixture of South African and his Bane character from The Dark Knight Rises), but it’s Theron as the smart, stoic Fruriosa who really shines. Although dominated by its British and American stars, the film is never loses sight of its quintessential “Aussieness” and there are familiar faces among the cast, notably Adelaide’s Quentin Kenihan and glamazon Megan Gale, in addition to the aforementioned Lee. 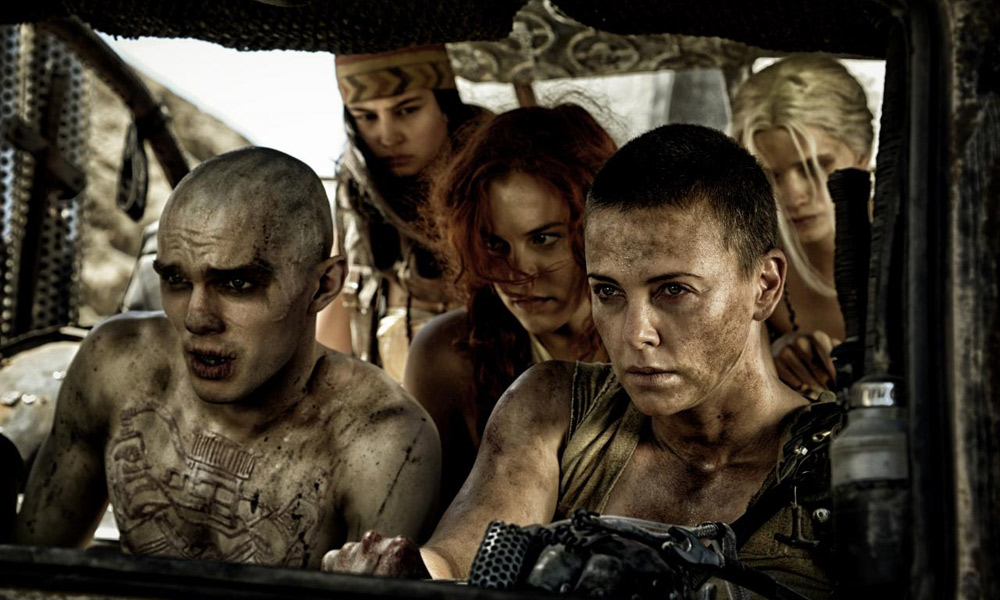 Fury Road largely takes place in, on and around moving vehicles – a device that could quickly tire (no pun intended). Miller and his creative team achieve no small feat in keeping what is essentially a two-hour car chase feeling fresh and the action avoids becoming monotonous. The Fast and the Furious franchise, take note.

Director George Miller, who also directed the three earlier Mad Max films, has said that 90 per cent of the effects used in the film were practical and only 10 per cent created with CGI. He manages to do here, with now old-fashioned techniques, what so many lesser directors armed with teams of animators have failed to do: create an awe-inspiring, original vision. It’s a vision that is raw, yet dazzling, and where the action and violence feel like they have all too real consequences.

The production and costume design (by Colin Gibson and Jenny Beavan, respectively) are gloriously deranged and the visuals throughout the film are luscious – even in the desolate setting. In this fourth instalment, Namibia stands in for outback Australia. Filming was set to take place outside of Broken Hill in 2010 (where Mad Max 2 was filmed), but when a patch of unseasonably wet weather resulted in the baked landscape becoming a blossoming field of wild flowers, production was forced to move.

With a two-hour running time (modest by current standards, but a half hour longer than the three crisply paced previous films in the series), Fury Road is a tad overlong – the final act felt somewhat pieced together and could have done with some finessing. But this is nitpicking.

Mad Max: Fury Road is a tall drink of water in a blockbuster landscape bursting with diluted Marvel-based fare (not all bad, but definitely not all sterling). Miller has created one of the most uncompromising, unpredictable and, most importantly, fun films of the year.