It’s VE Day in London and everyone wants to celebrate.  The streets are alive with revellers and jubilant crowds clamour at the gates of Buckingham Palace.  Inside, the two young princesses, Elizabeth and Margaret, beg their parents to let them join the party.

Queen Elizabeth (better known now as the Queen Mother) sensibly says “no”, but their father can’t resist their pleas.  The King is preoccupied with rehearsing his speech to the nation and just wants a little peace in the Palace.

This much is apparently true – the princesses, then aged only 19 and 14, did leave the Palace on VE (Victory in Europe) night to attend the Victory Party at the glamorous Ritz Hotel.   But what happened next?

A Royal Night Out takes Elizabeth and Margaret on a great adventure through the streets of London, arriving back at the Palace as dawn breaks over the city. 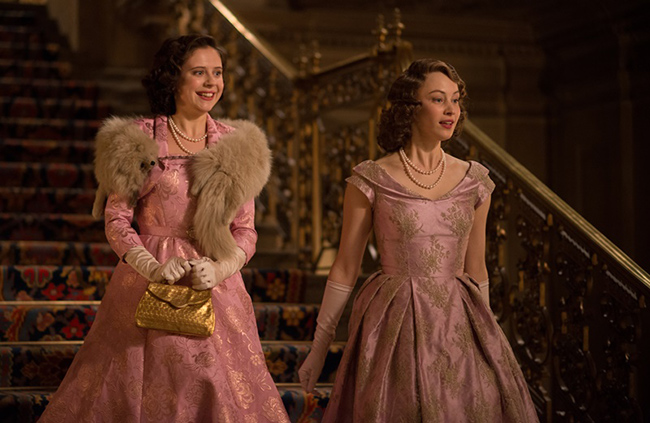 Directed by Julian Jarrold and starring Sarah Gadon as Princess Elizabeth and Bel Powley as Princess Margaret – “P2”, as she says – this is a lovely film. The story is almost certainly a complete fiction but it is beautifully told.

Emily Watson is charming as Queen Elizabeth and Jack Reynor plays the quintessential working-class boy back from the frontline.  There are some wonderful minor characters, too – the campy footman, the nightclub spiv, and the tossy toff.

But the absolute star of the show is Rupert Everett as King George Vl.  Everett plays down the King’s famous stammer (thankfully!) and gives him a delightful humanity and a great sense of humour.

We’ll probably never know what the princesses really did on that historic night – it’s not disclosed in any of the royal books I’ve read – but this is certainly an adventure fit for a Queen.