The day young Grace Tame confronted her abuser in his office at school was the day she lost all fear of what people thought of her, a fearlessness that reaches all the way to her interaction with the Prime Minister.

Upsetting applecarts and frowning at Scott Morrison are not a bother for the fierce-minded sexual-abuse campaigner and former Australian of the Year, whose personal experience of grooming and abuse has given her agency and a voice at a time when people are ready to listen.

On stage at Writers’ Week at what was the biggest session in five days and included in the front row South Australian Governor Frances Adamson – with numbers that swelled even after the massively popular writer Trent Dalton’s session beforehand – Tame dug deep.

Although terrified of her abuser, who was a maths teacher at her Tasmanian school, she spoke of finding the courage to drop the mask of submissiveness she had been wearing after being groomed and abused by him. As the enormity of what was being done to her became clear, she summoned the courage to fight back.

She said many victims were unable to confront their abusers but standing up to him instilled in her self-belief and the strength to keep campaigning the way that she wants.

“My fear of upsetting the applecart died that day and it sure as hell died publicly standing next to Scott Morrison,” she said. “I did something I never thought that I would do [back then] and this is something I remember when I think I can’t do something like frown at the Prime Minister.”

Tame, who said she was diagnosed as autistic when she was 20, refused to play along for the sake of civility but says she is apolitical and stepped onto the stage as Australian of the Year with hope in her heart, which she still has, along with a little cynicism. 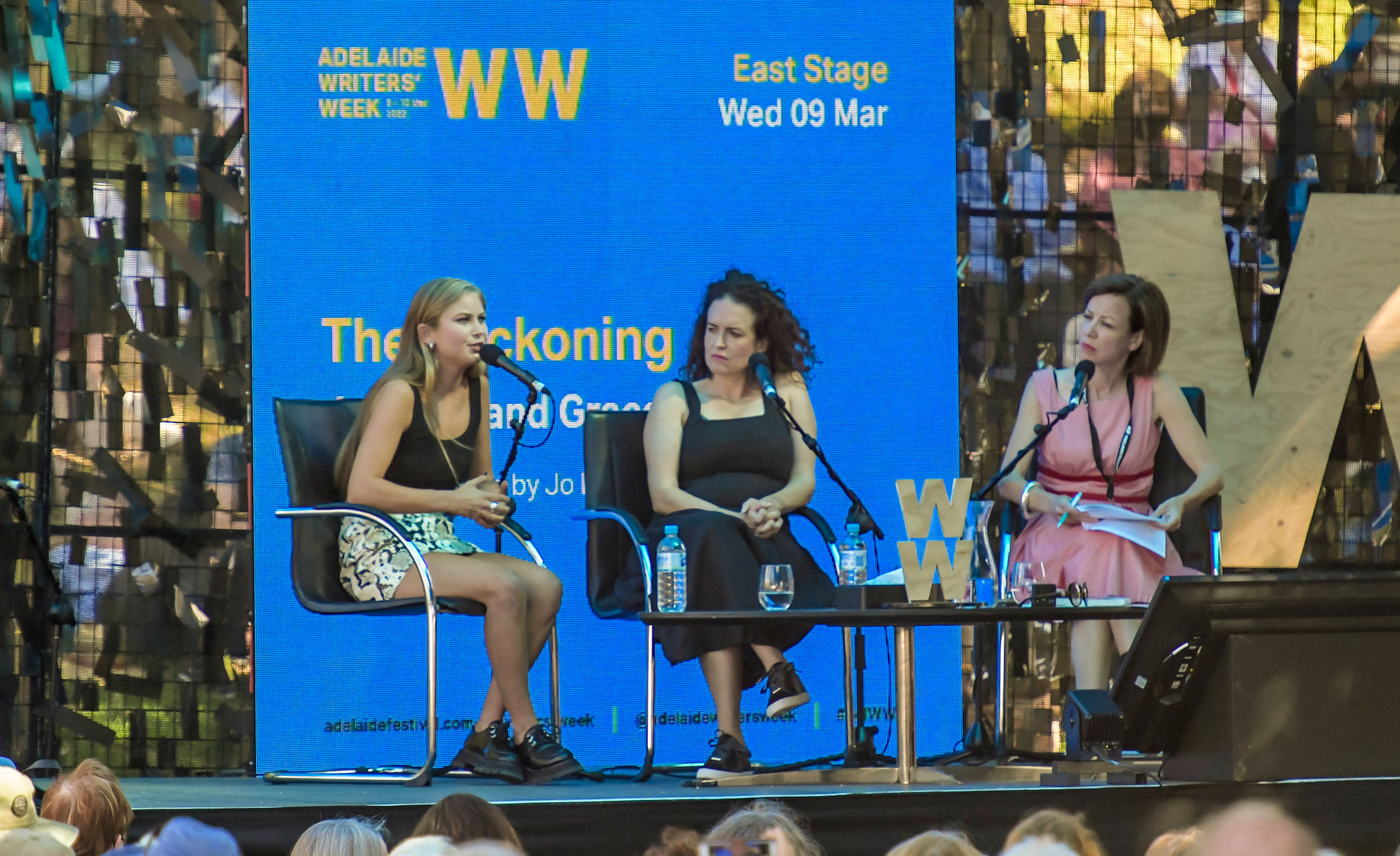 Speaking on stage with writer Jess Hill, a specialist on gendered violence, and retiring Writers’ Week director Jo Dyer, who is about to begin campaigning in earnest as an independent in the federal seat of Boothby, Tame gave more detail about the threatening phone call she received from a senior member of a government-funded organisation warning her not to criticise Scott Morrison.

She said the call was not an empty threat but a direct threat to withdraw support for the philanthropic foundation she has set up to continue her work preventing and responding to the sexual abuse of children.

“The threat was, from the person who phoned me, that they would not support the Grace Tame Foundation if I said something about the Prime Minister,” she said.

While Australia may be going through a period of reckoning, Tame made clear much still had to be done, including changing legislation and providing education about grooming, a psychological process of gaslighting, affection and intimidation that she did not know existed and was oblivious to while it was directed at her.

“It was quite a confronting thing to discover, and it was equal parts validating, you know; I wasn’t alone, this is textbook. But also,” she said, raising her voice, “this was textbook – why didn’t someone fucking tell me this? This guy was so good at this stuff… he was an expert at grooming.” 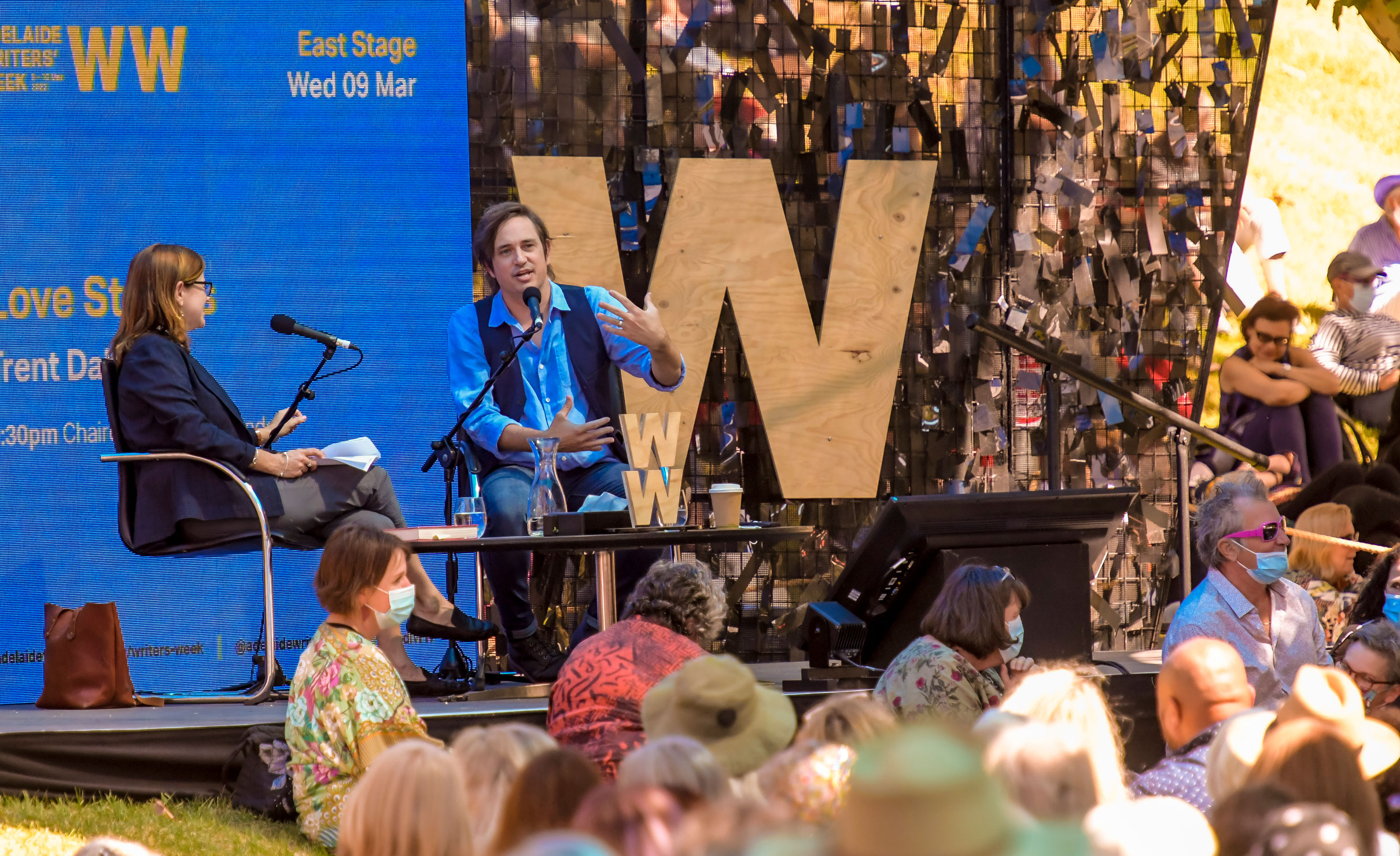 Novelist Trent Dalton, whose hit autobiographical novel Boy Swallows Universe won countless prizes and is to be made into an eight-part Netflix series starring Joel Edgerton, is a great believer in love.

He loves Adelaide – the best city in the world, you look beautiful, he said as the Pioneer Women’s Memorial Garden in front of him filled up. He loves people, he loved every question he was asked and he loves stories so much that for his latest book, Love Stories, he sat himself down with a chair and a typewriter at a busy Brisbane intersection under a sign that said Sentimental Writer Collecting Love Stories.

Dalton, one of the most approachable and gregarious people you could find, said he felt the need to get out of his own head after two novels, and out of his house after COVID lockdown. So he went out into the Brisbane streets to invite anyone with a love story to tell to join him on a second camping chair.

He admits it was a weird thing to do and some people did say no. “They all think you’re selling solar panels,” Dalton said. “It’s such a strange thing, it doesn’t happen in this world normally. People don’t often stop you and ask you about love.”

But sitting there with a sign and a sky-blue Olivetti left to him by the mother of a friend was a huge icebreaker, and people responded with warmth and generosity, even when he interrupted two young women falling in love at Starbucks, or asked a man with a baby what he was thinking.

Among the very touching stories that made it into the book was one about the love shown between two blind people, Graham, who was blind from birth, and Diane who lost most of her sight later. Dalton asked, with as much sensitivity as he could muster, if Graham thought about what he would do if he was granted five minutes of perfect sight.

“I did this slightly awkward question, ‘Look I’m sorry if this is insensitive but what would you do if you had five minutes of clear vision? Would you go to the edge of the Pacific Ocean and just stare at the sea or would you just look up at the stars?’,” Dalton said.

Graham told Dalton it was not an insensitive question but one he had thought about all of his life. By way of an answer, he offered this: “I know exactly what I would do,” Graham told him. “I would spend five minutes staring at this woman by my side.”

An emotional Dalton responded, saying, well, he didn’t mean to be insensitive again but can I tell you your wife is beautiful. “I know that,” Graham said. “I didn’t have to see to know that.”

Dalton said this was the point where he knew he had a book and it confirmed his faith in the beauty of stories people carry around inside them.

One of his next projects will be to approach mourners in cemeteries, using all of his considerable charm to persuade them to tell him everything they miss about the person whose grave they were visiting.

“And I’ll just listen,” he said. “Death is the other thing that I think can be really powerful. But of course when we talk about death, we are really talking about love.”