At WOMADelaide this weekend, festival-goers are likely to come across a cluster of 16 cloudy-grey-coloured cups/buckets and spheres made from a material that looks like glossy, hardened fairy-floss. Their unique appearance is enough pique interest, but the structures don’t truly come to life until they are in motion: when the objects spin, they, in turn, “spin” music, and are illuminated by LED lights.

HEXADECA is an interactive artwork dreamed up by Pulsing Heart, an Adelaide-based creative studio established by couple Joren Dawson and Jascha Boyce, of acrobatics and physical theatre company Gravity & Other Myths.

“Jascha and I are always coming up with crazy ideas in the arts sphere and trying to bring them to life,” says Dawson, lead artist and creative director. “We quickly realised that we needed a home for all of those ideas to happen and they couldn’t just be produced by ourselves independently, so Pulsing Heart was born.”

It is a fitting name for a company that creates “big art”, the kind that sits at the centre of a festival and pulses curiosity and discovery through the crowds of people.

“We are really trying to focus on creating public participatory pieces – so what HEXADECA is for WOMAD – which might be the heart of the festival, that people are drawn towards and think about afterwards,” says Dawson.

There is no “right” way to engage with HEXADECA, and participation will be led by the public.

“We are not going to guide people towards it… We are actually really excited to see how people play with it,” says Dawson. “It is inherently, naturally, geared towards younger people, given the playground nature of it, but we really designed it to be for all people.

“I’ve been thinking about it and trying to make sure someone like my dad would be comfortable sitting in them [the cups] and the way that they spin. If you are really keen to spin fast in them you can, but you can also sit in it gently.” 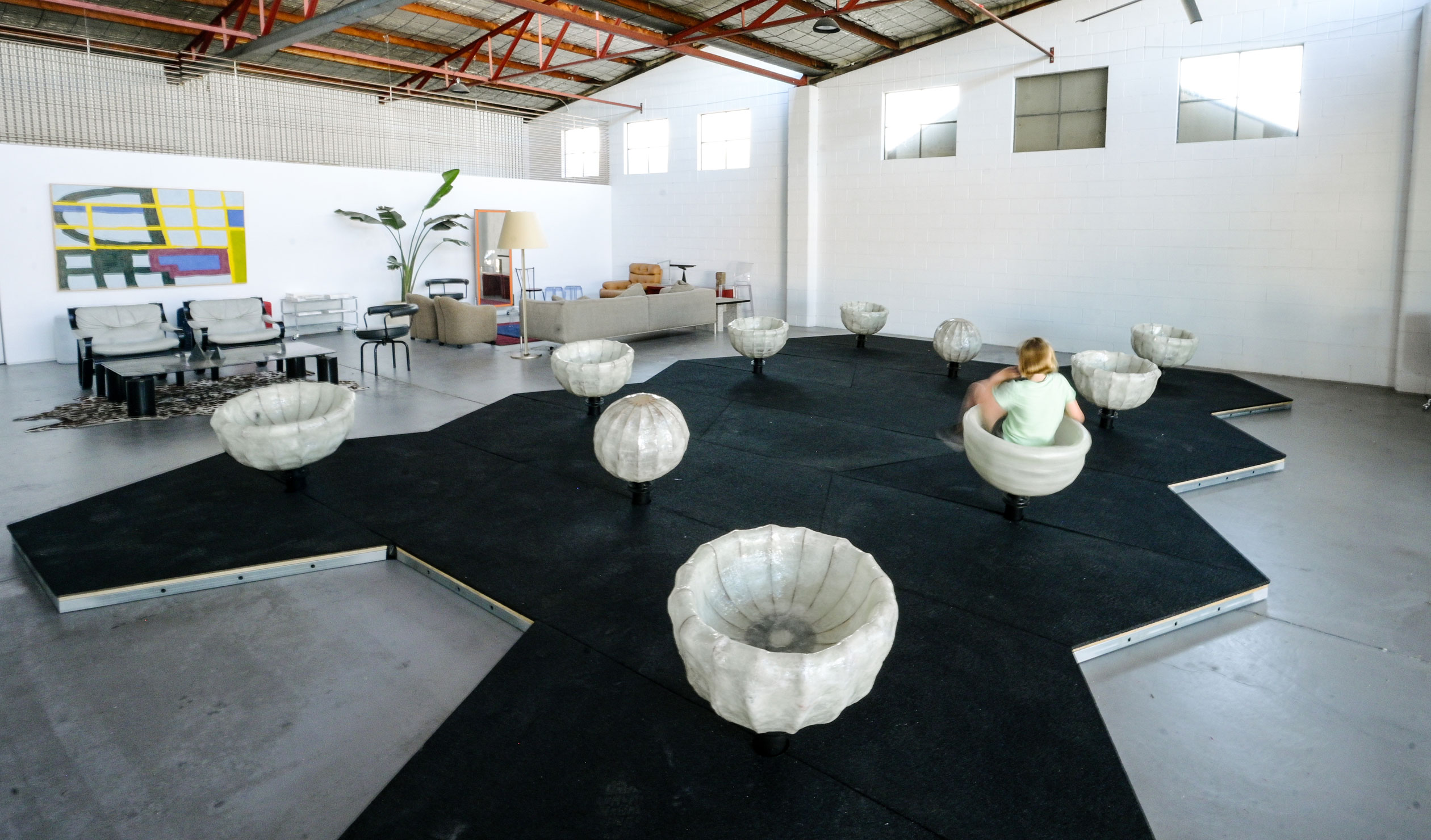 The designers have also given consideration to inclusivity, and that is where the spheres come in.

“These spheres we’ve made are for people who are less comfortable sitting in the seats for whatever reason, so they can spin them and still participate. And the seats, though we call them seats, you don’t have to sit in them to spin them – you can run around and spin them and touch them and stuff like that. They are really tactile.”

The music that accompanies these spinning structures has been custom designed for HEXADECA by a range of Australian musicians, including Aurora choir, Adam Page and Tom Thum. To align with the 16 spinning seats, each track has then been separated into 16 stems.

Participants can’t hear the music unless they spin the seats.

“So let’s say someone is spinning this one [seat], you would hear one-sixteenth of the music. Then some other stranger comes over and some people start spinning those two [seats], then you are hearing three-sixteenths of the music… let’s say this [all 16 seats] is full, you’d hear the song in its entirety, like the richest, most complex version of the tracks.” 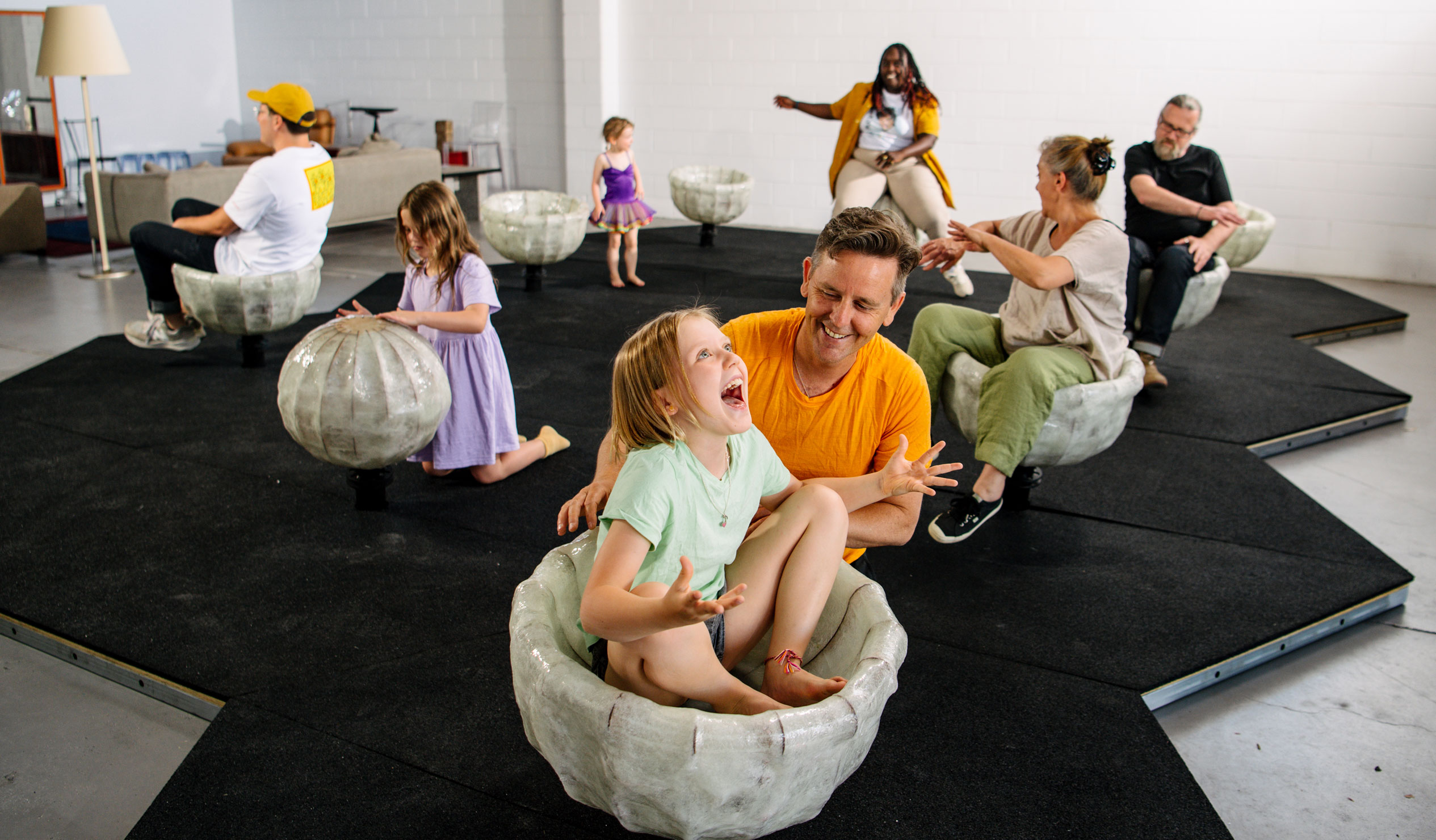 HEXADECA: ‘We are actually really excited to see how people play with it.’ Photo: Morgan Sette

The design for the seats started with plastic playground seats that look like small buckets, but the intention was always to create a structure with more complex tactility. The design has now evolved to use laser-cut medium-density fibreboard (MDF) and steel, which sits inside woven fibreglass roving (the grey, glossy, hardened-fairy-floss-looking material).

Designers Jake Jenkens and Simon Modra produced numerous iterations to reach the final product that is now set up in Botanic Park waiting to entertain festival-goers. Dawson landed on this version when he discovered that lighting could also be incorporated.

“Once it came to a possibility that we could have them glow from the inside, I was like, ‘Alright, I’m set on that – it has to be that!’” says Dawson, excited by the enchanting visuals HEXADECA will add to a colourful festival.

The idea that this unusual cluster of spinning objects can connect people through play, movement and music is indeed one to celebrate.

HEXADECA will be at WOMADelaide in Botanic Park from March 11-14.