“This is the world we live in right now… we have to hope and we have to plan,” OzAsia artistic director Annette Shun Wah told InReview when launching her inaugural program back in early August, adding: “This industry needs that hope because it’s been so hugely impacted over the past 14 months by the pandemic, and also we as an audience really need these festivals to go ahead.”

Shun Wah, who at the time was in lockdown in Sydney but is now in Adelaide for the festival, was being realistic about the likelihood her program would be affected by COVID-19 restrictions such as state border closures. And it has been, with a number of key shows cancelled and others forced to change their original line-up of artists, but OzAsia will indeed go ahead from October 21 until November 7 – and there is still plenty to keep audiences entertained.

The ever-popular Moon Lantern Parade has this year been transformed into an interactive trail in a free four-day community event (October 21-24). The trail will begin at Adelaide Festival Centre and feature a 40m Hong Kong dragon lantern sited along the Adelaide Oval footbridge. The main attractions will be at Pinky Flat, with more than 20 large lanterns on display, plus roving giant puppets. The trail will be open from 5-10pm on Thursday and Friday and 12-10pm on Saturday and Sunday; entry is free, but registration (here) is recommended. 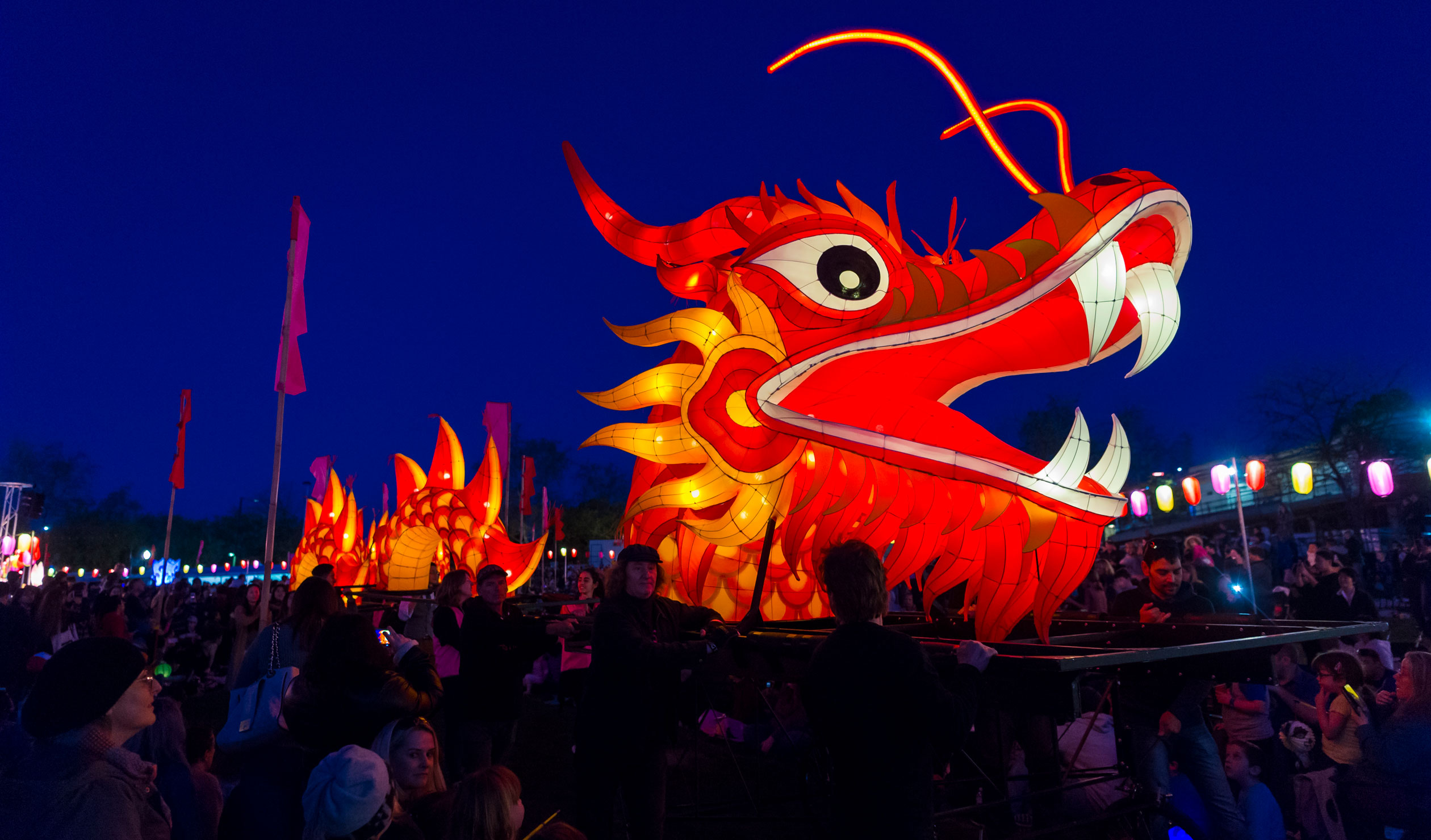 Playwright Anchuli Felicia King’s biting satire ­– playing at the Dunstan Playhouse over four days from tonight – is expected to be a highlight of this year’s festival program. White Pearl, which premiered in London in 2019, follows a start-up skincare company in Singapore whose new TV commercial for its range of “White Pearl” skin-whitening creams is leaked online and goes viral for the wrong reasons. “A lot of the comedy of the play centres on this spiralling crisis and the increasingly extreme lengths that the characters go to to do damage control,” King told InReview of the play, which incorporates digital projections to illustrate that the “live analogue disaster” in the office is unfolding against a bigger online cataclysm. 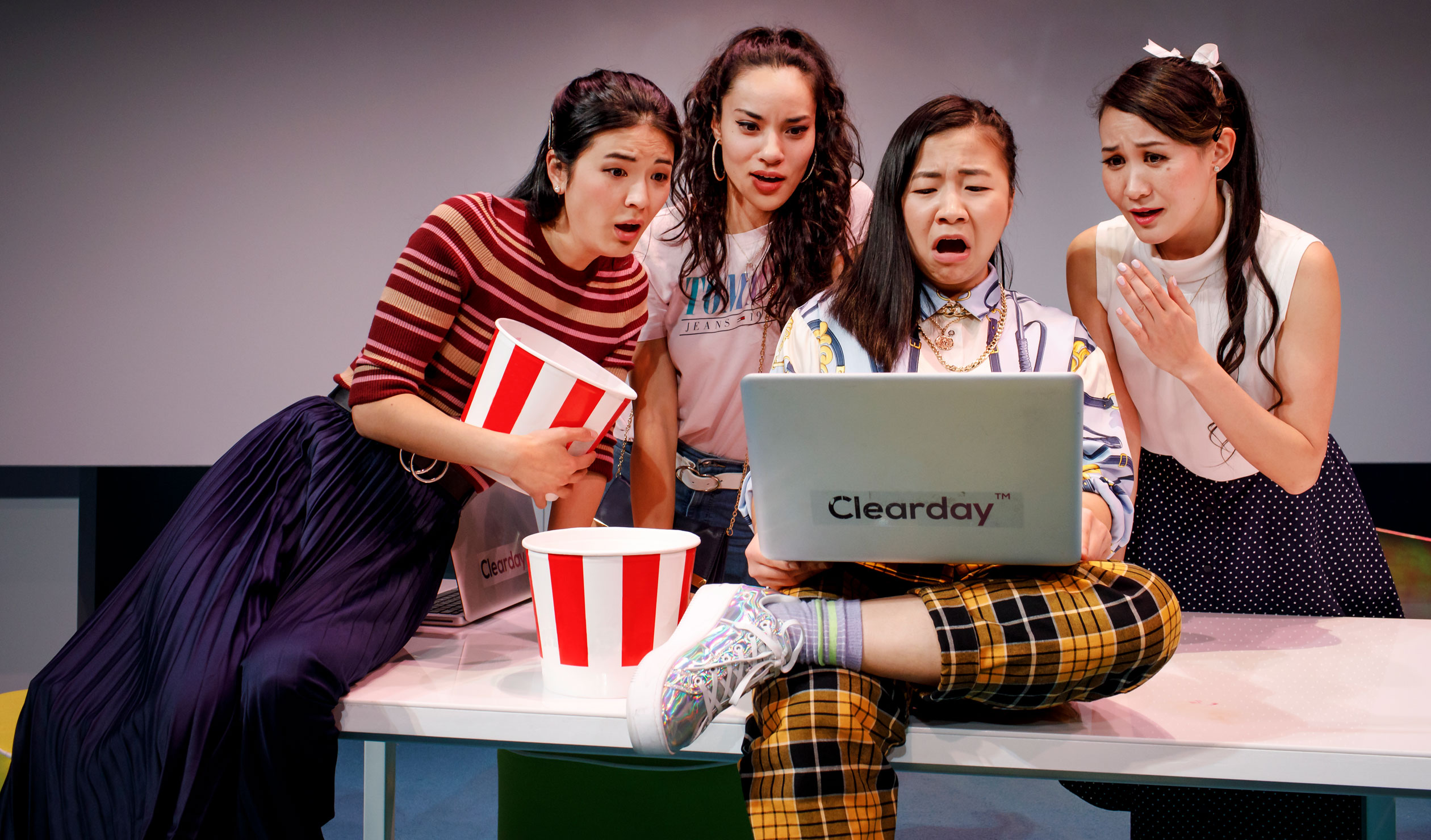 This food meets storytelling meets performance event at the InterContinental Adelaide (October 28-30) has almost sold out, but there are still a few seats available. The show sees five “storyteller cooks” each recount a story that is significant to their life, after which the audience gets to taste the dish associated with it. The line-up includes writer Benjamin Law (who will share an amusing story about growing up in the shadow of The Big Pineapple), performance maker Valerie Berry, dancer Raghav Handa, and TV chefs Elizabeth Chong and Heather Jeong. “The stories are really varied but they cover some really huge themes about family and resilience and loss and legacy,” says Shun Wah, who is the event’s dramaturge and producer.

Interstate travel restrictions have forced several changes to the original line-up for this stand-up comedy event, with comedian and actor Dilruk Jayasinha – currently showing off his culinary skills on Celebrity Masterchef Australia – among those added to the bill. The evening will be hosted by writer, comedian and presenter Jennifer Wong (presenter of the ABC series Chopsticks or Fork?) with others taking to the stage at Her Majesty’s Theatre on October 30 including Nicholas Huntley, Kehau Jackson, The Golden Phung (Roy Phung and Eddie Morrison) and The Coconuts (Leela Varghese and Shabana Azeez), with music by local band Trio Sepia.

This centrepiece dance work is an ephemeral performance about parallels and connection by Adelaide-based choreographer and dancer Alison Currie (co-director of the recent Progress Report polystyrene-based dance work at Vitalstatistix) and her Japan-born counterpart Yui Kawaguchi. Somewhere, Everywhere, Nowhere, which has its world premiere at the Space Theatre from October 21-23, uses sound, light and form to accentuate the contrasting techniques of each dancer, with the intricate choreography drifting in and out of sync to expose “the significant, simple and absurd”. 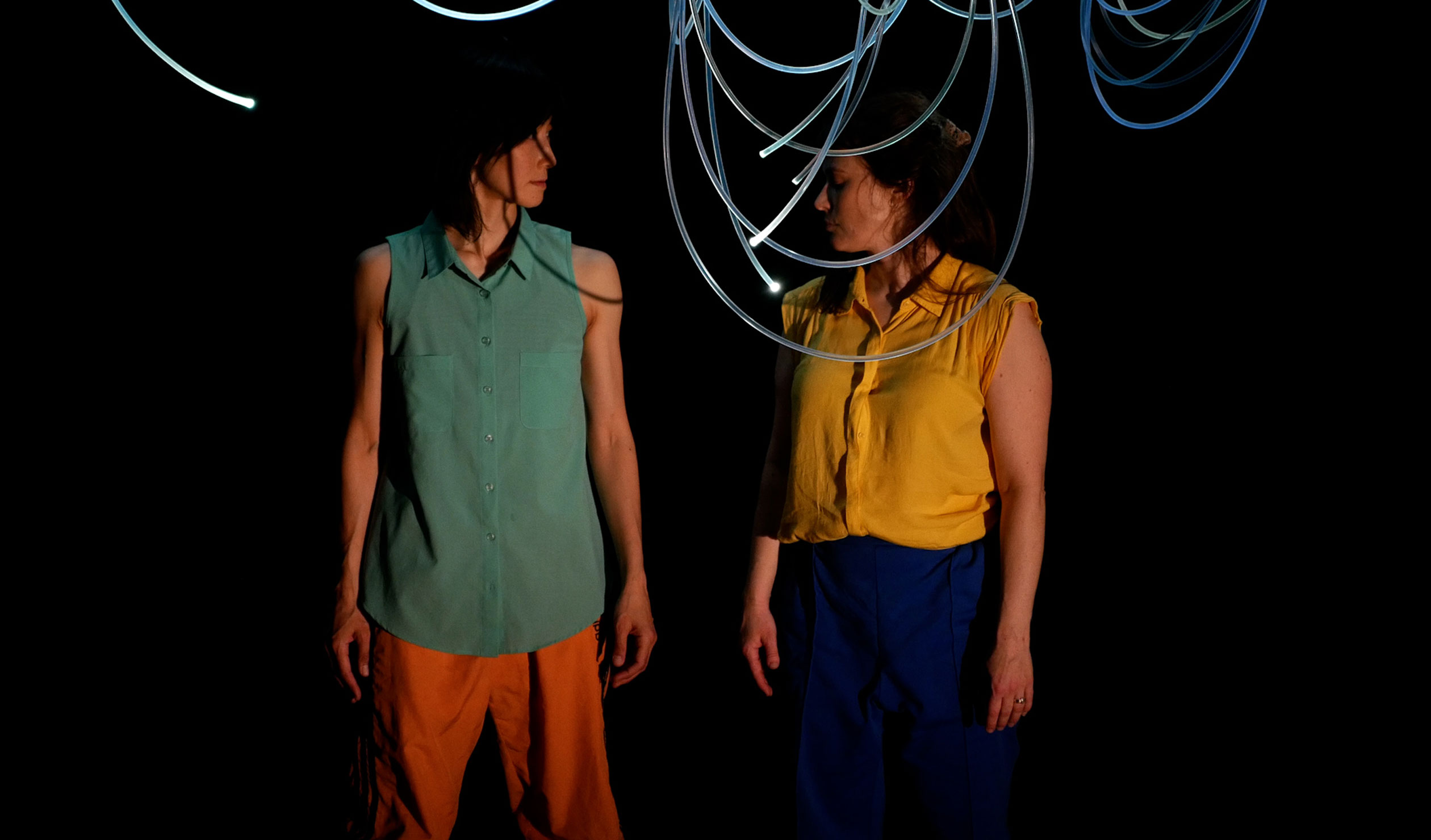 Intimate encounters are at the centre of this series, which will see six everyday Asian-Australians open their homes to a small group of strangers and share their stories with them. Open Homes is led by Singapore-based theatre director Jeffrey Tan, who originally presented the project during the Singapore international festival of the arts; the Adelaide series is a collaborative effort for which he has worked with local facilitators. Audience capacity for each event will range from just 12 to 20, with the host storytellers including entrepreneur (and former Lady Mayoress of Adelaide) Genevieve Haese; Ee Ling and Francis Tan, owners of Lot 8 Singaporean restaurant in the Aldinga Arts EcoVillage; and Irene Lau Verapen and Morgan Verapen, “an inter-racial couple who found love at unexpected stages of their lives”. Sessions are scheduled across various dates from October 22 until November 7. 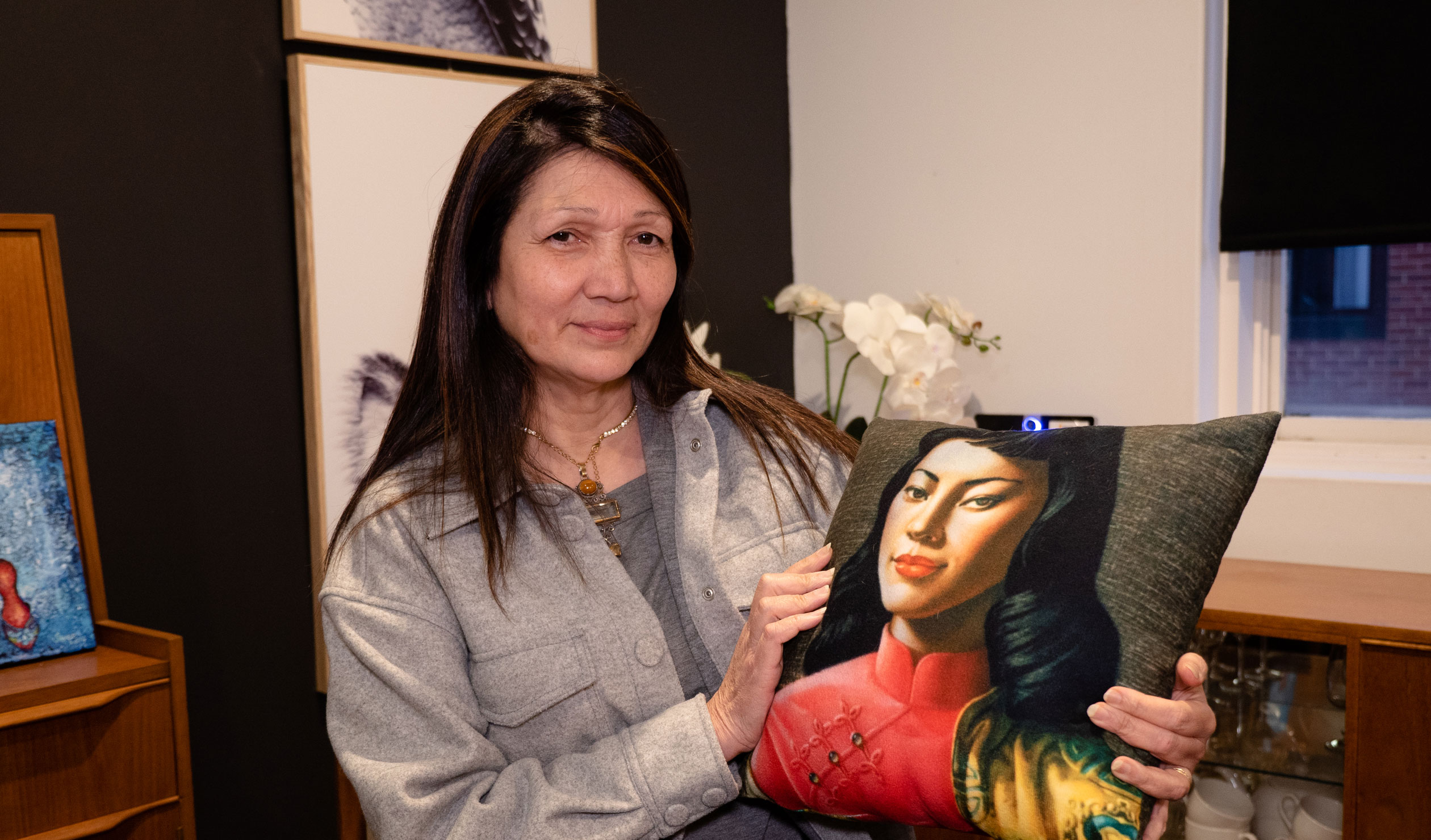 Genevieve Haese will share her story during the Open Homes series.

Wayang kulit, a traditional Indonesian form of shadow puppetry, is reimagined in this production by multi-disciplinary artist Jumaadi and composer/sound designer Michael Toisuta. Suitable for ages 12 and up, Perahu-Perahu is described as a surreal and magical adventure exploring the precarious nature of the relationship between humans and the sea, inspired by the history of travel over the oceans between Indonesia and Australia. It uses cut-outs, found materials, overhead projection and live music, and is playing at the Space Theatre from October 27-30.

More than 40 Australian and Asian “writers and thinkers” will take part OzAsia’s new writing and ideas program, which has been curated by former Adelaide Writers’ Week director Laura Kroetsch, with guest curators Benjamin Law and Roanna Gonsalves. Kroetsch says the November 5-7 event will put a focus on Australia’s place in the Asia-Pacific and “what it means to be an Asian Australian”, with free sessions covering themes ranging from racism, grief, sex, family and identity, to “words and music” and food culture. Speakers include award-winning author and filmmaker Larissa Behrendt, chef and TV host Adam Liaw, playwright Anchuli Felicia King, foreign correspondent James Oaten, and Miles Franklin Literary Award finalist Michael Mohammed Ahmad (The Lebs). While some speakers will appear in person at the Dunstan Playhouse, pandemic restrictions mean others will take part via live video link. Read our full interview with Kroetsch here.

The full program for the 2021 OzAsia Festival (October 21 – November 7) is online. The Lucky Dumpling food market will return to Elder Park for the duration of the festival.

InReview readers can buy discounted tickets to The Special Comedy Comedy Special on October 30 at Her Majesty’s Theatre for just $30.  Click here to purchase tickets and enter the promo code: ‘special’.