The start date for Illuminate Adelaide may not be until July 16, but the response to a couple of early activations indicates locals are eager to ward off winter with an injection of light and colour.

People have been queuing to see the Van Gogh Alive “multi-sensory extravanganza” since it opened in North Adelaide last week, with demand so strong its season has now been extended by three weeks until August 22, and many sessions have also sold out for Adelaide Zoo’s Light Creatures – an after-dark experience featuring large lanterns and lighting effects.

Illuminate Adelaide co-founders and creative directors Rachael Azzopardi and Lee Cumberlidge say tickets are also selling well for other events, including the Light Cycles digital art trail in the Adelaide Botanic Garden, and a performance by The Avalanches with the Adelaide Symphony Orchestra on July 30 at the Entertainment Centre.

“We’ve been really overwhelmed by the response,” Cumberlidge told InReview. “We’re loving seeing the excitement in the community and with the team of people working with us. It’s all coming together and we’ve started to bump in many of the different sites.”

With a program encompassing ticketed and free events ranging from live music and a block party, to virtual-reality experiences and projections, the festival takes some navigating. Azzopardi suggests that to get the most from it, people can dovetail a free and ticketed activity in one evening: checking out the City Lights installations in the north or east precincts before entering Light Cycles, for example, or viewing one of the short VR works at Queen’s Theatre in the West End before exploring the installations in the surrounding streets. 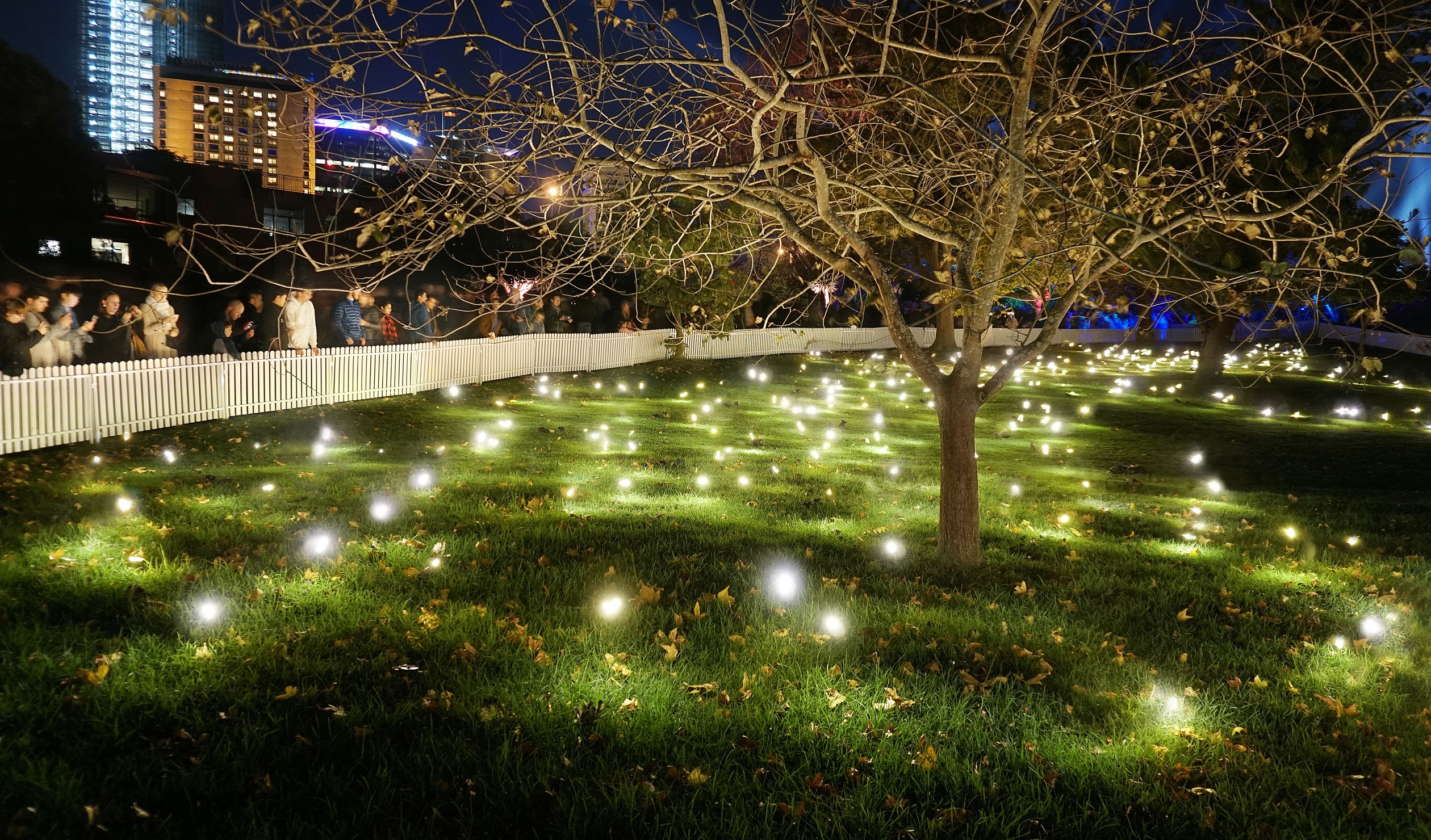 Firefly Field, by Studio Toer, on the University of Adelaide’s Goodman Crescent Lawns.

The free City Lights experience encompasses more than 40 works ­– including kaleidoscopic projections, inflatable installations and interactive exhibits ­– spread across three distinct precincts in the east, west and north of the CBD. Described as a “nocturnal playground”, it can be enjoyed from 6pm until 11pm across all 17 days of Illuminate Adelaide.

“We feel there’s not just one night you’d want to come in but a couple of nights, and you can navigate a different area each time,” says Azzopardi, advising that it’s best to allocate at least 45 minutes to an hour to make the most of each precinct.

A map showing all the City Lights works can be downloaded from the Illuminate Adelaide website. Here are just a few options to get started:

East End Echoes: A self-guided walking circuit of lighting, projections and soundscapes by Illuminart that highlights the stories and history of landmarks in Rundle Street and adjacent laneways. It is accompanied by an audio track (the link for which will go live on the website on Friday), so be sure to BYO headphones.

Emergent Horizons: Adelaide’s Rising Sun Pictures and Pixel Ninjas are bringing a taste of Hollywood special effects magic to Lot Fourteen with projection mapping on buildings that audience members can interact with.

Kaylene TV: Projections on the Institute Building on North Terrace of playful paintings offering a snapshot of the pop-culture-infused world of award-winning APY Lands artist Kaylene Whiskey. (Read an interview with Whiskey on CityMag).

Big Picture Series: Curated by local artist Vans the Omega, this series features street art, augmented reality works and projections spread out between Hindley Street and Light Square. It includes works by international artists such as Russian art collective Tundra, whose new multi-media work Row – at the Queen’s Theatre – uses high-speed LED fans to suspend “a hypnotic array of shapes, patterns and meaning” into the air. 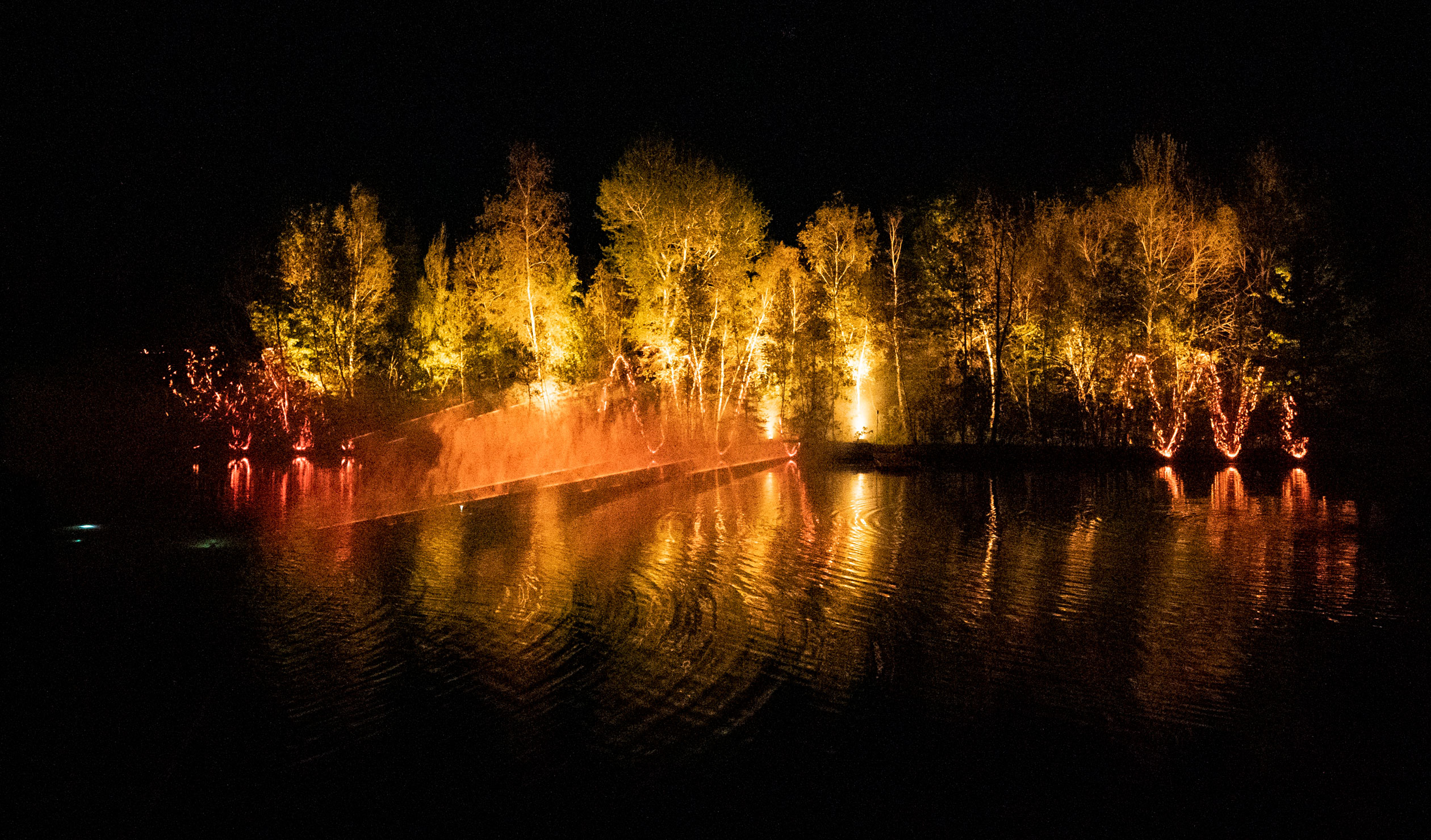 A Moment Factory image of testing in Canada for the Light Cycles experience to be presented in Adelaide Botanic Garden. Photo: supplied

The Adelaide Botanic Garden digital art experience created by Canada’s internationally renowned Moment Factory promises to be a standout of the festival, taking visitors on a night-time journey of nearly 2km in which video projections, light effects, lasers, smoke and soundscapes enhance and transform the garden’s natural features.

“Our experience is called Light Cycles, so it’s inspired by the connection between humans and nature,” creative director Gabriel Pontbriand recently told InReview. “We will have seven distinct artworks in the gardens and each is inspired by a natural phenomenon.”

Light Cycles opens this Thursday, with sessions (bookings essential) beginning every 15 minutes from 6.15pm. Azzopardi and Cumberlidge say it takes around an hour to absorb the full experience, and visitors can take their time to enjoy the various installations.

They also urge people not to be deterred by predictions of rain, adding that umbrellas are permitted.

“Everything we’re doing is designed for all weather, and so if anything I think the kind of rain that we’re starting to see come through this week will enhance Light Cycles because of the amount of lasers and lights and things,” Cumberlidge said on Monday. “It almost provides a dramatic element to the lighting because of the particles in the air that pick up the light.”

(Update: severe weather warnings late in the week forced the official opening of Light Cycles to be pushed back to Saturday, July 17.)

Illuminate Adelaide includes the world premiere of two virtual-reality experiences, both of which are being presented in collaboration with the Adelaide Film Festival at the historic Queen’s Theatre.

First up, showing from this Friday, is Square Circles VR, an immersive work featuring visual landscapes set to a score performed and recorded by composer and acclaimed didgeridoo player William Barton with the Adelaide-based Australian String Quartet. The 10-minute work will be presented in a walk-in dome, and shared by just 25 people at a time.

Thin Ice VR is a very different kind of experience, also presented in the dome, which will open on July 26. It uses technology called 360 photogrammetry to enable visitors to join environmental scientist Tim Jarvis as he follows in Ernest Shackleton’s footsteps on his epic 1914 Antarctic expedition. The 20-minute work also highlights how the icy environment has been affected by climate change.

Get yourself along to Adelaide Zoo to check out its after-dark “adventure” featuring large lanterns including two 6m giant pandas, towering giraffes, a 27m-long animatronic skink designed by Anangu artist Elizabeth Close, and an underwater world with 10 colour-changing jellyfish and glowing coral.

“We’ve had some complete nights sold out,” says Azzopardi. “It’s the first time the zoo has ever had a night-time activation in this way… being able to go to the zoo at night is pretty exciting because you see it in a different light.”

Sea of Light is the latest fun, family-friendly offering from Adelaide’s Patch Theatre, which might be overlooked amid the array of other Illuminate activities but is worth checking out in the Art Gallery of SA.

Showing now in The Studio at the gallery, it coincides with the exhibition Surrealists at Sea, with Patch artistic director Geoff Cobham saying the company was inspired by the surrealist worlds of brothers Dusan and Voitre Marek and their journey to Adelaide: “In response we have designed a magical play space where families can create their own journey in light.”

Also at the AGSA ­– lighting up the building’s North Terrace façade throughout Illuminate – is Melbourne-based visual artist Atong Atem’s new video work Banksia, a series of vivid moving portraits and tableaus about this country’s first African settlers. A video showing the making of it can be viewed online. 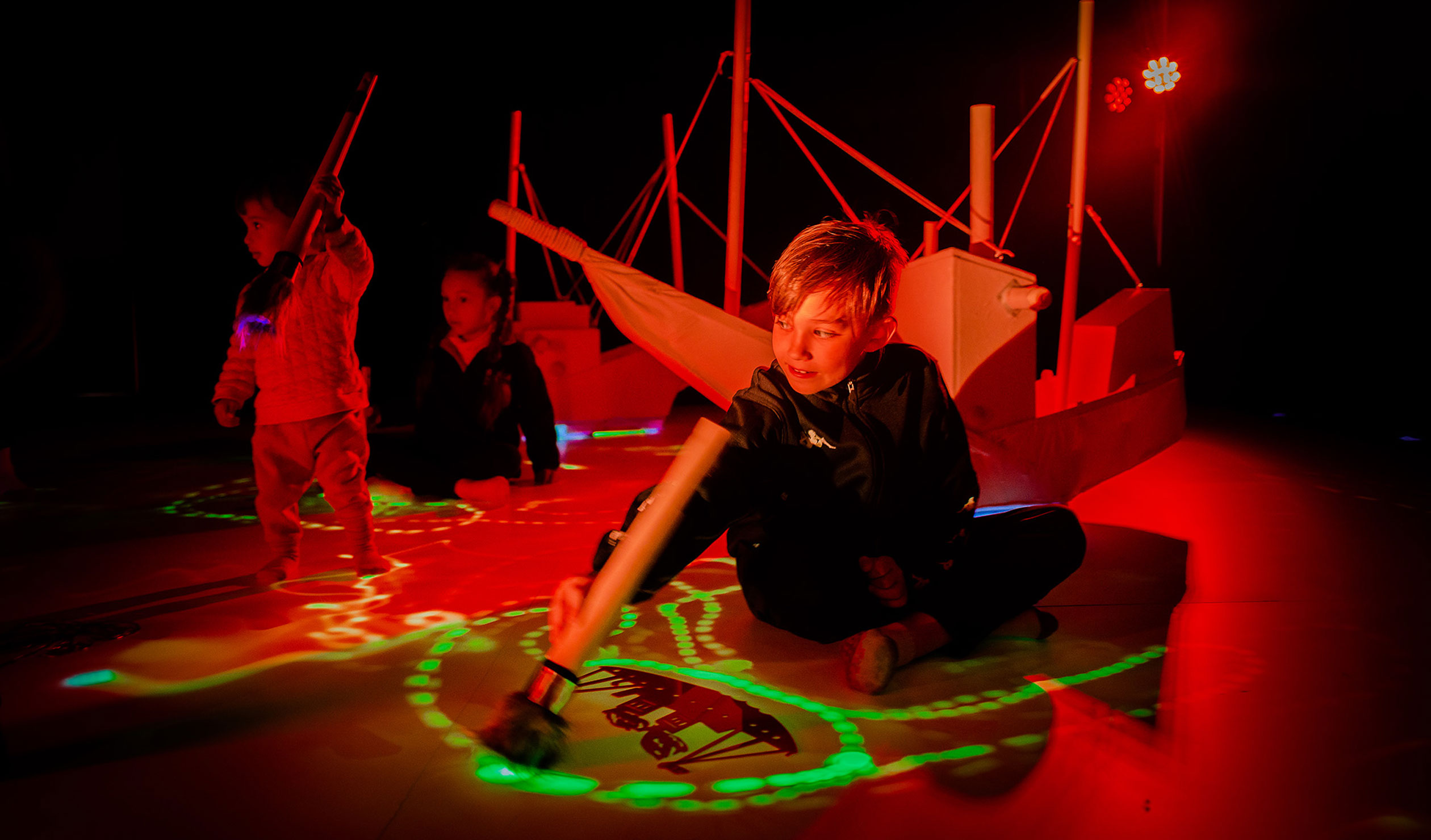 Sea of Light, by Patch Theatre, in The Studio at the Art Gallery of SA. Photo: Nat Rogers

The Avalanches’ live performance of their debut album Since I Left You, at the Entertainment Centre on July 30, is the centrepiece of the Illuminate Adelaide music program. The concert, presented with the Adelaide Symphony Orchestra and conductor Nicholas Buc, will feature orchestral arrangements of the group’s songs, and will open with a performance by Adelaide’s Electric Fields.

Other music highlights include the Australian String Quartet performing with William Barton at Adelaide Town Hall; Kinara, an “evening of music, culture, Kin and Country” featuring Aboriginal and Torres Strait Islander artists at Tandanya; and Light Visions, Dark Intervals, in which pianist Paul Grabowsky will perform a response to photographs by Adelaide photographer Alex Frayne at the Town Hall.

AKA Music & Art After Dark, this is the multi-venue West End block party that will close the 2021 Illuminate Adelaide Festival on July 31. As well as a DJ set by The Avalanches, it will also encompass art, film, installations, bars and food – CityMag offers a taste of the full line-up here.

Illuminate Adelaide runs from July 16 until August 1. Read our review of Van Gogh Alive, which now continues until August 22, here. The full program is available online.