Soulful sister act Vika and Linda Bull have garnered a strong following over their 30+ years in the music business, releasing 11 albums (including two live ones) as a duo and recording and performing with artists including Paul Kelly, Archie Roach, John Farnham, Deborah Conway and Kasey Chambers.

They’re known for their beautiful harmonies – “They make the air beat in sync”, Kelly says – and for a time were familiar faces providing backing vocals on TV music quiz show RocKwiz.

Last year, however, the Melbourne artists’ fan base extended into new corners when, in the middle of the COVID-19 lockdown, they posted on social media a parody performance of Tina Turner’s “Nutbush City Limits” – renamed “Iso City Limits” and performed with the dance moves familiar to all those of a certain vintage.

“I could not believe that six and a half million people watched it!” Linda Bull tells InReview.

“I knew there was something in it when we were watching the TV and we were on the news… it was just funny, even the dog was in it, and my kid was filming it.”

During that first lockdown, the sisters began a Sunday Sing Song series, posting a video each Sunday of themselves performing a different gospel song in the comfort of their own home environment. They were surprised by the response, Linda says, but the uplifting music and engaging, no-frills performance was clearly what people needed during such a tough time.

“You don’t have to be religious to listen to that sort of music; we just wanted to make people feel better. That was the intention, but really it worked the other way – they made us feel better and it was kind of cool…

“I was surprised at how much I enjoyed it. It was a different way of doing things but we were still in touch with an audience – a massive one, because like 200,000 people would watch it every Sunday. I really got a kick out of it without it being too much pressure.”

The series led to Linda and Vika’s release, last September, of the studio album Sunday (The Gospel According to Iso) with cover versions of songs including “Memphis Flu”, “Jesus on the Mainline” and “Amazing Grace”. It followed the release a few months earlier of their best-of double-CD Akilotoa | Anthology 1994-2006, which debuted at No. 1 on the ARIA sales charts.

Linda says audiences can expect a mixture of music from both those albums, plus some original songs from a new forthcoming album, when the duo perform at WOMADelaide this Saturday.

With COVID-19 constraints seeing the annual world music festival reimagined as a series of four sunset concerts in King Rodney Park in the Adelaide Park Lands, they are appearing in the sold-out Saturday line-up which also includes headliners Midnight Oil and Indigenous duo MRLN x RKM.

Although Vika and Linda performed at WOMADelaide in Botanic Park with CW Stoneking in 2015, the last time they took to the stage on their own at Adelaide’s world music festival was in 1995, soon after releasing their first self-titled album as a duo after leaving The Black Sorrows.

The sisters, who learned to sing listening to Tongan vocals at church, went on to do what Linda describes as “the whole WOMAD circle” – performing in England and Spain, and participating in the Real World Recording Week (where artists from around the world were offered recording opportunities at WOMAD founder Peter Gabriel’s Real World Records studio in the UK).

“We spent a week just soaking up the atmosphere with all the other artists he’d chosen from different WOMAD festivals around the world,” Linda says.

“It was unbelievable. It was one of those things you do where you go, ‘Why am I here?’ and, ‘I’m glad I am!’ We did a duet with Iggy Pop! It was just bizarre… one of those surreal things.

“Our album was recorded with Tchad Blake, who is a world-famous producer, and he was also experimenting with this binaural recording equipment, which is like singing into a mannequin’s head .. so we went down a mine and we recorded ‘Akilotoa’ there, a song that we sang all in Tongan.

“So WOMAD did start this thing for us years ago, which was opening ourselves to collaboration and different styles and experimenting with our mother’s language in our music, and it’s been like that ever since, so really it sort of lit this spark in us.”

While this year’s WOMADelaide will be a very different experience from past festivals in Botanic Park, she and Vika are excited to be performing live again after Victoria’s pandemic shutdowns, and happy to be in a line-up with Midnight Oil.

“Playing with Midnight Oil is a massive honour for me because when I was a kid they were my favourite band and they were the first band I ever saw live,” Linda says.

Linda and Vika are planning to release their next recording – their first full-length album of original material in 18 years – later this year, and say they are ready to begin a new chapter.

“We’re very lucky to have songs on there by Australian songwriters that we admire. It’s a trust thing, because when you hand over a song to a singer you never know if they’re going to stuff it up or make it even better, so we just want to try and make it better. 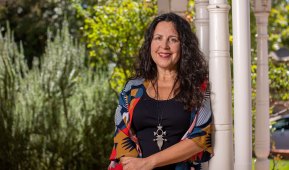 “We’re really chuffed that they’ve given us songs and now it’s our job to bring them to life in our own way.”

WOMADelaide is presenting four sunset concerts from March 5-8, with other artists in the line-up including Sarah Blasko, Archie Roach, Lior and Nigel Westlake with the Adelaide Symphony Orchestra, Tash Sultana and the Teskey Brothers. See the full program here.