On a December afternoon, Jo Dyer is ticking off the books she plans to read during the Christmas break. For someone who is constantly reading as part of their job, you might think that she would welcome the chance to slow down for a few weeks. Instead, she is eagerly anticipating catching up on the books that eluded her in 2018. First up is 28-year-old Irish author Sally Rooney’s hit novel Normal People.

“I read her first book, Conversations with Friends, earlier in the year,” she says.

“It was so packed full of ideas and so eloquent that I immediately tried to get her to come to Writers’ Week. She’s not available for 2019, so I had to put Normal People aside while I focused on the program.”

For several years, first as CEO of Sydney Writers’ Festival and as director of AWW since mid-2018, Dyer’s bookshelves have been populated with new releases. Recent books by literary stars, home-grown talent, and emerging writers comprise the bulk of her reading as she conceives a line-up of local and international authors for Australia’s pre-eminent literary festival.

“Adelaide Writers’ Week is part of this city’s identity,” she says.

“It’s free, it’s outdoors and people come to discover new writers and new books. It’s a festival of discovery in a way that no other writers’ festival is in this country.”

Dyer has always been an avid and fast reader, and these days is usually in the middle of several books at once. At the time of this interview, she was part way through two debut novels by Australian authors, Kate Richards’ Fusion and Angela Meyer’s A Superior Spectre.

Among the books that gripped her in 2018 were Richard Power’s The Overstory (“an incredible, utterly compelling, sprawling novel about, well … trees”), Oyinkan Braithwaite’s My Sister, the Serial Killer (“dark and very, very funny”), and Hwang Sok-yong’s At Dusk (“a powerful novel about an old man reflecting on his life”). Braithwaite and Sok-yong will be among the authors appearing at the 2019 Adelaide Writers’ Week, which opens this weekend. 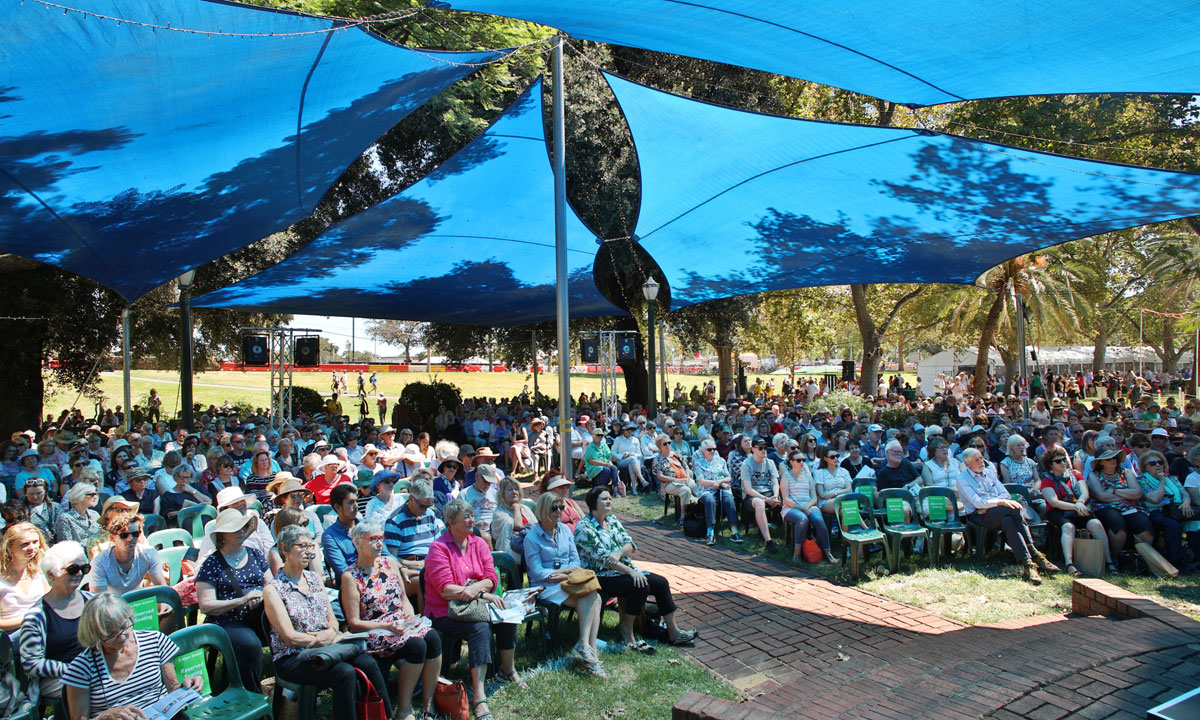 The audience at a session during Adelaide Writers’ Week.

As a child, Dyer’s university-academic parents encouraged their children’s appetites for books with weekly Saturday morning outings to the local Burnside Library.

“We’d borrow somewhere between four and eight books each for the week and stop at the bakery for a pie on the way home,” she says.

“On Sundays we’d gather around Dad, who would read to us. I remember listening to Swallows and Amazons and The Hobbit, stories of great, fantastical adventures.”

Most children who read eventually reach for a book that will shift their perception of what a book can be. For Dyer, that book was Nan Chauncy’s Tangara, the story of Lexie, a girl who discovers a necklace that transports her through time and space to a Tasmanian Aboriginal community. There she befriends Merrina and soon bears witness to a brutal attack on the community.

“It’s an astonishing thing to find yourself weeping over a book when you’re seven or eight years old,” Dyer says.

“For a long time, I couldn’t remember the name of the book. I only remembered, very strongly, the emotional impact. It was filled with these wonderful descriptions of an Aboriginal family, their community, their way of life, which made what happened in the book’s ending so devastating.”

Less distressing, if no less impactful, was The Swish of the Curtain, a 1941 children’s book by Pamela Brown, who was only 14 when she penned the story of a group of children who turn an abandoned theatre into their own company. Dyer, who worked in theatre production in Sydney for many years, has sometimes wondered if this book planted the idea in her head.

“I discovered later that there were four sequels to the first book. I reserved them at the library and impatiently waited for them to come back in. When I finally got my hands on them, I devoured them!”

By her late teens, Dyer had taken a deep dive into feminist literature, consuming books including Germaine Greer’s The Female Eunuch, Doris Lessing’s The Golden Notebook, and Ursula K Le Guin’s The Left Hand of Darkness.

“That was an important era of reading for me. Reading can be a question of timing, and many of us go through a time when we are exploring ourselves and our beliefs through reading.”

These days she takes as much pleasure in political memoirs such as Bob Carr’s Diary of a Foreign Minister or Don Watson’s Keating biography Recollections of a Bleeding Heart as she does from bestseller lists.

One of her favourite books, Rohinton Mistry’s tour de force A Fine Balance, was loaned to her by Rachel Healy, the now joint artistic director of the Adelaide Festival, when the two friends were on holiday together.

“Rachel thought it was an incredible book and passed it onto me. It was probably the first book I had read about India and it gave such rich insight into that country in the mid-1970s around the time of The Emergency.”

Dyer also counts herself among the many “unabashed fans” of Elena Ferrante’s Neapolitan books. She blitzed through Hanya Yanagihara’s controversial novel A Little Life. Min Jin Lee’s sweeping immigration story Pachinko, with its “extraordinary, deeply observed characters”, captivated her. Richard Flanagan’s Man Booker Prize-winning The Narrow Road to the Deep North “was so well drawn and so devastating with those incredible descriptions of the violence and of the gruelling reality of the POW camps that I found it difficult to read”.

Dyer has never shied away from books that are confronting, tragic or heartbreaking, and sees her reading life as a deep engagement with the minds of others.

“Reading for me is about exploring ideas, however they are expressed. It’s about insight and illumination. I do it for many reasons — to be informed, engaged, entertained, and sometimes devastated,” she says.

This article was originally published in the February edition of SALIFE magazine, which is available now.

The 2019 Adelaide Writers’ Weeks runs from March 2-7, with an opening address by author Ben Okri on the Palais this Thursday. See the full program here.