Adelaide-based composer David Kotlowy’s dreamlike soundscape envelops us as soon as we enter the theatre: the soothing sound of evening crickets lulls us from the frenzy of the outside world.

Kotlowy steps slowly across the stage, monk-like, with his shakuhachi, a traditional Japanese bamboo flute whose simple construction belies the complex textures of the melancholic sounds it creates.

Heightened with subtle digital interventions, Kotlowy uses pedals to create loops of harmony, a gentle wall of sound. With slow movements, he plays as if practising suizen (“blowing meditation”) and kneels on a meditation cushion to strike a large O-rin, a bowl-bell used in Japanese Zen Buddhist temples.

Kotlowy builds the dreamy atmosphere for the rest of the performance. Members of the Gamelan Sekar Laras ensemble quietly take their places and begin to play, the sounds merging with the O-rin into a great OM. Dance artists Ade Suharto and Shin Sakuma emerge in contemplative procession from the shadows, led by calligraphic artist Juno Oka. 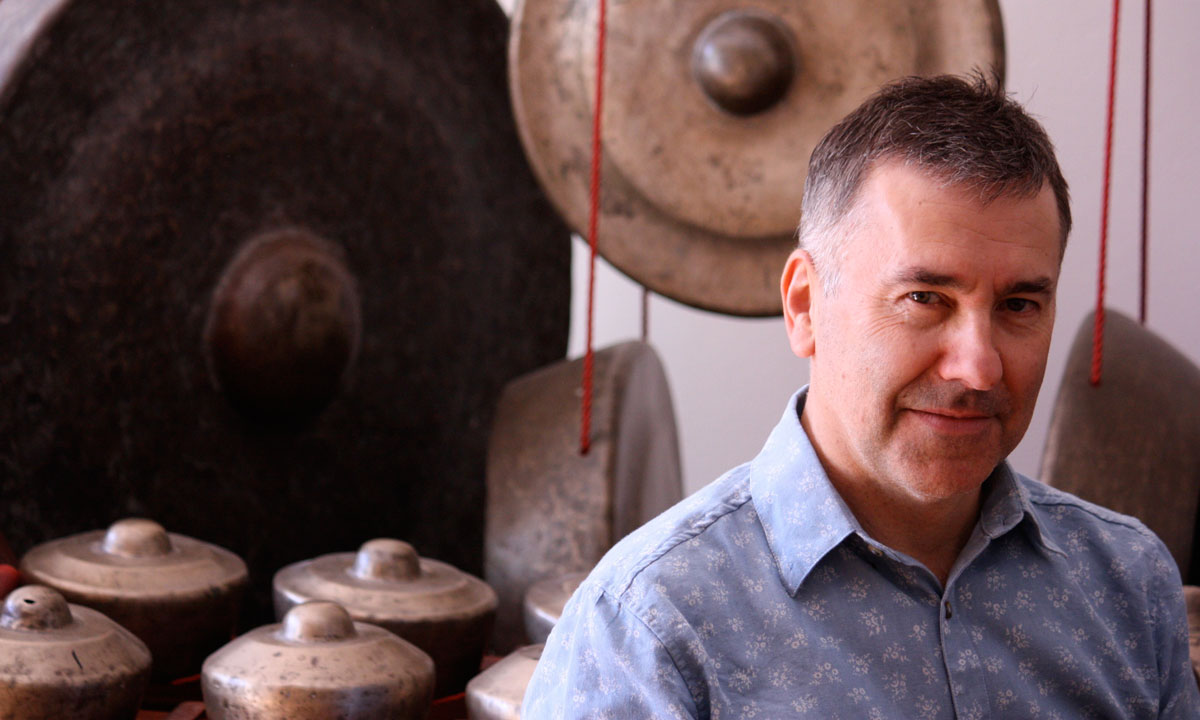 Oka manipulates the tall, rectangular blocks on stage throughout, using them as surfaces for his calligraphic art, a backdrop against which Suharto and Sakuma perform. Sakuma moves before the swirl of peachy, flower-like clouds Oka creates, as if he himself has become cloud-like, arms flowing in subtle, slow and delicate movements, summoning expressions of his Japanese roots: traditional folk dances, Noh theatre, and Butoh.

Suharto takes her turn, moving with graceful poise, summoning her Indonesian dance heritage with angular turns of head and feet, gently swift or in slow contemplation, the sounds of the gamelan merging with the whole and raising the hairs on the back of one’s neck.

Lighting and stage effects create the feel of a garden changing with the seasons; light patterns of water; a fragile fall of cherry blossom which adhere to swirls of glue Oka brushes onto the blocks; sounds of Japanese cicadas evoking the height of summer. Sakuma steps onto the bait boards designed to translate the pressure movements of the dancer into sounds, distorting the cries of the cicadas.

The slight delay to the start of the performance suggested possible technical issues, and one wonders if the minimal integration of the bait boards may have been the cause. Whatever issues there may have been, however, did not lessen the gentle and fragile beauty and poetry of this ambitious production.

Living up to its name, Patina builds slow layer upon layer of beauty, offering a glimpse of wabi-sabi: a Japanese term that describes an aesthetic heightened by the poignancy of impermanence. Half the seats were, sadly, empty on its opening night — may the remaining performance be well-attended. Patina deserves a full house.