The Space Theatre stage is neatly hemmed in by shield-like metal uprights, some more than two metres tall, dressed with Indian cloth drapes, one a square cloth bearing the figure of Ganesha; there’s also a tiny stage-upon-a-stage bearing the guru’s pot, cups and other implements of chai. An intimate place is created for the actor Jacob Rajan and guitarist Adam Ogle to tell their tale together.

“Who am I? What is my purpose?” Rajan begins. “Hopes and dreams turn to dust – your children don’t respect you – depression – this is the slippery slope.”

This show will give us all the answers, it is claimed; the narrative is serious and funny by turns, told essentially in the first person by the chai guru about the things he witnessed and participated in.

This dramatic mode could be testing material in less assured and gifted hands, especially when stretched over nearly an hour and a half. However, Rajan’s personal charisma and superb timing, both comic and dramatic, delivers lines that make us laugh, and then reflect, and laugh again. The narrative material rushes forward at a pace that keeps the audience in rapt engagement throughout. 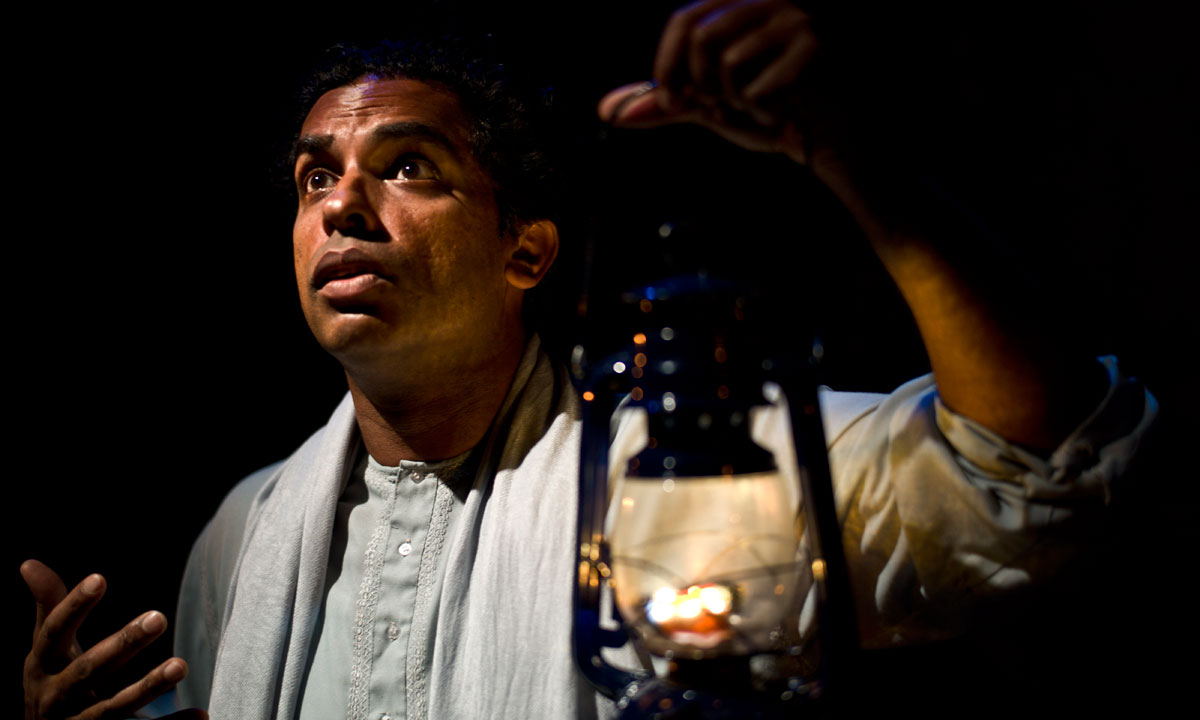 Jacob Rajan as the chai guru.

Rajan interacts with the audience and acts out multiple characters, many of them in conversation with each other. There are rapid changes in lighting effects, blackouts, sound effects, excellent physical use of space, even strikingly effective shadow puppetry. With such dash and wit and command of the stage, Rajan completely owns the show.

His perfect foil is Ogle on guitar, vocals and sound effects, sitting stage right. His relationship with the main performer s established immediately. The story is that he supposedly went to India to find himself (like so many young people!); he didn’t succeed in answering his own big questions, but ended up with a vow of silence that meant he could sing but never speak.

He also provides a wondrous variety of timely effects from a little soundbox, not to mention scrunched up plastic bags, tapping the woodwork, etc. His acoustic guitar playing is delicate, at times mimicking the bending sitar sounds The harmony singing of the pair has you believing that a young homeless girl really could move a railway station crowd to sympathy.

For it is the song of the homeless girl who performs with her six sisters in Bangalore Central Station, and what happens as a consequence, which is the subject of the performance. One by one the girls are married until only the youngest remains, and the station policeman who fatefully falls in love with her, but is rejected. But to find out more it is recommended to go and see Guru of Chai.

There are further performances of Guru of Chai at the Adelaide Festival Centre’s Space Theatre tonight and tomorrow. Read more InDaily and CityMag OzAsia Festival stories and reviews here.