Dustyesky are a men’s choir from the New South Wales town Mullumbimby who sing Russian songs, despite not being Russian.

For the past three years, the group has met every Tuesday at the Mullumbimby Ex Service’s Club to share a beer and sing some Russian songs.

When asked by InDaily why they have such an affection for Russian music, choirmaster Andrew Swain is quick to reply: “Why nyet?”

“Russian songs are great – the passion in the music is addictive and they come bubbling up from way down deep,” he says.

“The music just flows, that’s the easy part. The hard part is the words.”

The idea to start a Russian men’s choir in a town of just 3500 people sprung up during a late-night vodka-drinking session.

“The director of the Mullum Music Festival had a brief encounter with some Eastern European choral music at some stage in his life and it left a good taste in his mouth,” Swain says.

“He kind of said to me one night that he wanted to get a Russian choir out here for the festival and he was saying, ‘How am I going to get a bloody Russian choir?’

“It was pretty late at night, we were drinking vodka after a pretty hectic Saturday night party up at Des’s place on the hill out the back of Mullumbimby, and I just said, ‘Well we can start our own, mate’.

“I woke up the next morning and thought, shit, what have I done.”

Dustyesky member Mark Swivel says the choir “does their best” to perfect the Russian pronunciation despite a lack of native speakers.

“There’s a smattering of Russian heritage amongst the fellas but not a lot,” he says.

“We have Josh, whose surname is Ivanoff but we call him Aussie Josh – he’s not very Russian although he rocks a good beard.

“Really, we’re just a bunch of middle-aged ratbags from Mullum.”

The choir gets by with the help of a Russian-speaking local.

“We’ve got a woman up here who used to work on Russian ships in the Antarctic and she speaks Russian and does our transliteration,” Swivel says.

“Mostly we get good reviews. Sometimes we get people who say, ‘I have no idea what you’re singing about’, but they must be from the deep north of Siberia.

“It’s like the difference in accent between Mullumbimby and Adelaide – sometimes it’s difficult to understand.” 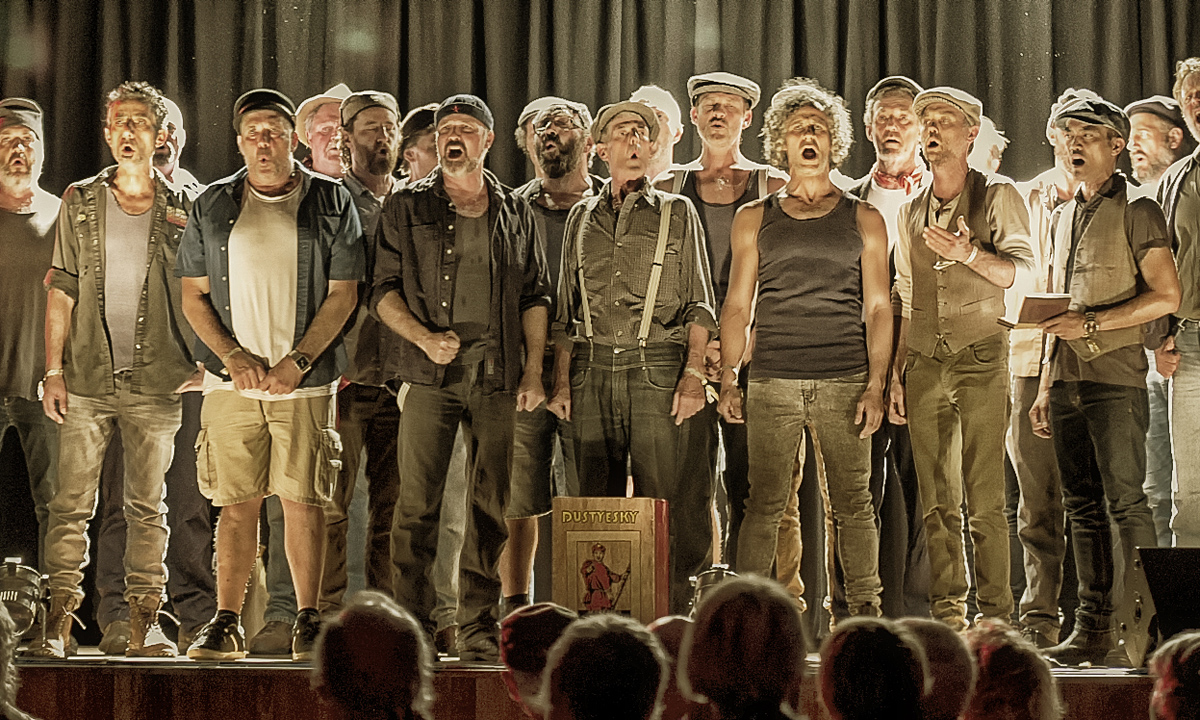 Many of the men had little singing experience before signing up to the choir.

“There’s people like Bruce who last night was saying publicly that when he started he actually could not produce a note and I would now class him as a singer,” Swain says.

“When he started his wife came up to me saying, ‘You need to realise you’re making a terrible mistake’, and I said to her, ‘Everybody can sing, it’s just a matter of finding the right voice’.”

From their humble roots at the Mullum Music Festival, the choir quickly caught the attention of the Russian media.

“They ran a five-minute story on Chanel 1 which is like their version of the ABC with an apparent audience of 250 million people,” Swain says.

“We then had some interest from Russian cable stations and we did a couple of live streaming performances over the interwebs for them.

“That was huge – we thought that [Russian billionaire] Roman Abramovich might at that point just appear the following day with his jet and fly us all over there, but that hasn’t happened yet.”

Despite having never travelled to Russia, the group has performed for the next best thing – the Russian ambassador to Australia.

“[He] came up all the way from Canberra to come to our gig in Sydney and he sat in the front row and I think he enjoyed every second of it,” Swain says.

“He was the smiley-est, happiest old chook and at the end he shook my hand warmly and he said, ‘Your pronunciation was perfect’, and I thought, you’re a diplomat so it must be true.”

Dustyesky will perform a selection of Red Army and Russian folk songs at this year’s WOMADelaide Festival.

“The songs really get hold of you and it’s almost like they make you sing them,” Swivel says.

“You can’t sing any of these songs in a half-hearted way.”

The 2018 WOMADelaide Festival will take place in Botanic Park from March 9-12, with Dustyesky performing on all three nights. Read more about this year’s line-up here.