Instead of indulging in a little pelvic thrusting at the Mars Bar on Friday night, Dr Glossip was engaged in intellectual intercourse with Art Gallery of SA director Nick Mitzevich at a Feast Festival event titled The Gloves are On!

Together, the two led a happy band of Feasters and art lovers on a select tour of the gallery’s collection, vaguely based on the theme “Is the nude rude?”.

Dr Glossip, resplendent in a Holywoodesque zebra-print coat with hat, gloves and Spanish fan, began by bemoaning the fact that the entrance to the gallery “is looking a little dull”.  The vestibule could be enhanced enormously if we imported the Elgin Marbles, she mused.

Mitzevich resisted the notion that the gallery could be enhanced with more bling and extra drapery, and insisted (more than once): “I’m the Premier’s taste-maker – he trusts me to have taste!”.

Mitzevich is justifiably proud of the gallery’s status as the single largest asset of the state and refreshingly open about the challenge of constantly trying to source private support.  (If you’d like one of the galleries within the gallery named in your honour, $3.5 million will do the trick). 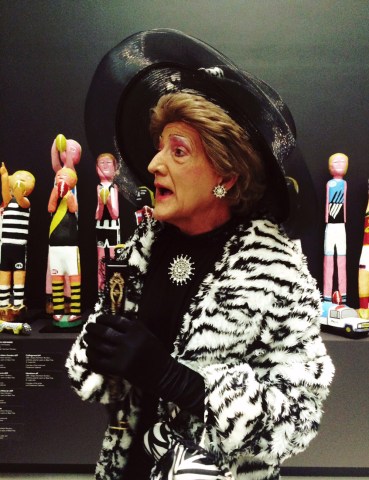 Dr Glossip with one of the gallery’s Tarnanthi exhibits.

The tour began in earnest with a discourse on the life-size nude statue of Buck Angel by British sculptor Marc Quinn.  Angel, the world’s best-known trans man and a leading identity in the British LGBTIQ (lesbian, gay, bisexual, transgender, intersex, queer) scene, was here for Feast last year and appeared at the gallery with Mitzevich.

We moved on to a small Francis Bacon painting, now the single most valuable work in the collection; two dead horses that apparently boosted gallery attendance by 40 per cent; and three interesting Jeffrey Smart paintings dismissed as “boring” by our presenters.

From there, it was a sashay through the gallery’s diverse collection until we could all repair to the courtyard for a well-deserved bubbly libation or two.

This delightful evening could just as easily have been presented by Dr Glossip’s alter-ego, Will Sergeant, who has been an active Feast participant since the festival began and whose history walks are always popular, but there is no doubt that Dr Glossip is a star.

The Gloves are On! Was a one-night-only Feast Festival event. The festival continues until November 29.