“The worst thing that can possibly happen is that we might, maybe, kind of, sort of embarrass ourselves,” say the pair, who are heading to Adelaide next month for a one-off show at the Feast Festival.

Here, they share some of the most amusing and challenging ideas they’re received, and reveal what improvisation has taught them about people.

The idea of improv seems vaguely terrifying to most mere mortals – why do you do it?

People probably assume that getting up on stage with no script and no idea what is about to happen is the most horrific thing in the world, but the truth is, we’re not alone on stage. We have each other.

And more than that, we have the audience: they know that we’re making the whole thing up as we go, so they’re already on our side. We don’t have any lines to forget, we don’t have any cues to miss, and the worst thing that can possibly happen is that we might, maybe, kind of, sort of embarrass ourselves. Slightly.

But if you don’t really care about that, then suddenly all the fear is erased. We do this because it’s a beautiful art form; it’s challenging and supremely rewarding.

Without sounding too mushy, improv skills are good life skills. We get to create characters, relationships and worlds, and then explore them. We get to play make believe, and it’s the most fun ever.

What is the most challenging suggestion you’ve ever had from an audience member and did you take it up?

Because of the way we phrase our opening – “What is something you would like to see a show about?” – we get a lot of fairly interesting suggestions. Sometimes, however, there’s a person in the audience who tries to throw us.

During our Melbourne Fringe run, someone yelled out: “Menstruation”. It was the first thing we heard, so we took it, to the audience’s shock. What followed was one of the best shows we’ve done. There was a daughter’s coming-of-age, a rough patch in her parents’ marriage, a grandfather and his best friend, and a surprisingly large amount of pot smoking from characters.

What’s the funniest improv you’ve performed and how did it play out?

During Melbourne Fringe, a friend of ours, a nurse, yelled out the suggestion: “Hospital”. We saw bitchy receptionists, a beautiful doctor/patient relationship blossom, a terrible “bring your child to work” example, and an ice-cream truck that was manned by the local Lothario and his son.

Getting a location as a suggestion did a lot of the work for us, so all we did was have fun with it.

Where do you find inspiration for the characters and storylines you create?

As far as character creation goes, we have a range of different techniques we use: physicality (outside – in), point of view (inside – out), vocal work, or just something that we noticed in the last scene that inspires us.

The depth and nuances of the characters are discovered as the scene progresses. The storylines, on the other hand, are never created: they’re discovered.

We have no idea what the show is, or where the show is heading, until over halfway. We assume everything is connected somehow, but we never know how until later in the piece, when it becomes apparent to us. The trick then is joining the dots faster than the audience can.

You both trained at The iO Theatre in Chicago, where people like Mike Myers and Tina Fey have also studied and performed. What was the most valuable thing you learned there?

The intensive course we both took at The iO Theatre is so dense that it’s almost impossible to take away one particular thing, especially because everyone takes away something completely different. The passion for this art form, however, is something that affected us both.

Nowhere else in the world is this art form so passionately taught, and it has such a culture surrounding it that you can totally immerse yourself in it, seven days a week. More than anything, the recognition of improv as a craft, and the artistic excellence it can achieve, that was the most important thing for us. 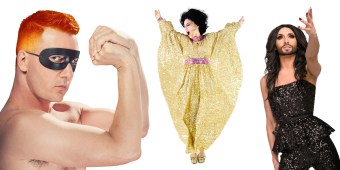 The suggestions you receive must give you an insight into the minds of your audiences. What has doing improv taught you about people?

When we ask for a suggestion, we’re often bombarded with about 20 different options; we take whatever we hear first, so the rest just becomes white noise. But through the reactions to our shows, we’ve come to realise that our audiences want to feel, they want to connect.

They might come to our shows expecting to laugh, but the most beautiful responses have been those people who said: “I can really relate to that character, that hit something deep.”

In addition to that, people often ask us how we “know” what the other is thinking, and it comes down to something incredibly simple: we listen. We listen to everything. People have a tendency to not do that; they don’t listen to the small reactions, they don’t watch to the minute facial expressions. People tend to be in conversations and wait for their turn to talk, rather than engage.

People want to feel connected, but more often than not are unwilling to try to connect.

The Sparrow Men will present an hour-long improvised show at West Bar, UniSA, on November 20 as part of the Adelaide Feast Festival.