But as the film rolls, it soon becomes clear it is neither serious nor trying to be a true representation of time and place. Instead, what emerges is  mix of heightened realism, gothic horror and comedy set in a western-style town in outback Australia. 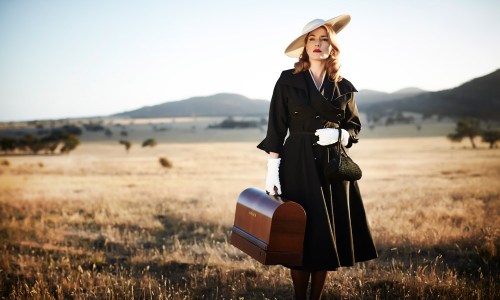 The Dressmaker was adapted from Rosalie Ham’s 2000 novel of the same name. Set in the 1950s, the plot unravels the story of the disgraced Tilly Dunnage (Winslet), who was sent away from the tiny fictional town of Dungatar as a 10-year-old.

After attending school in Melbourne and then working in Paris alongside the famous couturier Madeleine Vionnet, Dunnage eventually returns to look after her mad mother (Judy Davis), exact revenge on the people who wrongly accused her of murder and unstitch the mystery of her past.

The film is a bit predictable to start with, but the audience is drawn in as the drama and mystery intensifies. Exploring the themes of revenge, love and creativity, The Dressmaker is described by director Jocelyn Moorhouse as “Clint Eastwood’s Unforgiven with a sewing machine”.

The opening scene showing a pioneer bus rolling across the dusty landscape is reminiscent of The Adventures of Priscilla Queen of the Desert. As Winslet alights the bus, looking immaculate in her hat and tailored suit, she places the Singer in the dirt, lights a cigarette and says: “I’m back, you bastards.”

Dunnage’s talent for sewing is her secret weapon, and with her needle and thread she successfully nurtures, seeks the truth and settles the score. As she transforms the plain-looking womenfolk of Dungatar into beauty queens with her made-to-measure gowns in sumptuous fabrics, the community begins to drop its hostility and the secrets of the past unfold.

Who is the menacing boy in the flashbacks? What really happened in the schoolyard that day? What dark secrets lay behind the accusations of murder?

Costume designers Marion Boyce and Margot Wilson are just as notable for their input as creators of the film’s visual feast of glamorous designs juxtaposed against the dusty landscape.

Although The Dressmaker is at times more wet than witty, Winslet and Davis create a synergy of depth, dignity and humour in the film as it reaches its wicked crescendo of delicious revenge. You’ll come out wanting to watch it all over again.

The Dressmaker has its premiere at Her Majesty’s Theatre tonight as part of the 2015 Adelaide Film Festival. It will open in cinemas later in the month.