“You were only supposed to blow the bloody doors off!” has become one of the best-loved quotes of modern movies and Michael Caine delivers the line with his trademark insouciance.

This show celebrates the music that enhanced four classic Caine movies: The Italian Job, Alfie, The Ipcress File, and Get Carter.

Musical director Terry Edwards has put together excerpts from the four soundtracks to create a program that goes from jazz to standards to classical with a pub-band backbone. 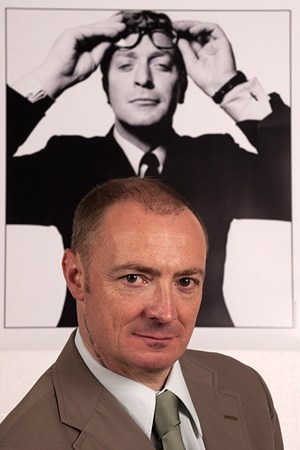 Terry Edwards in front of a poster of Michael Caine. Photo: Bleddyn Butcher

You might not recognise the tunes, but you do recognise the feel.  This is ’60s music, played with a “London swagger” and an enthusiastic dollop of nostalgia.

Most of the musicians play multiple instruments and are joined by local strings players The Zephyr Quartet to fill out the ranks.  Edwards himself plays trumpet, keyboard and guitar, and keeps it all together.

Clips from three of the movies are used to illuminate the music.  These are introduced by actor Trevor Nichols in the role of narrator.  Nichols offers curious anecdotes about the making of the movies and the stories behind the music.

Unfortunately, Edwards was unable to obtain copyright clearance on Get Carter, so the big screen remained largely unused during the second half of the show. This was no great loss, as the film element was a bit of a disappointment.  The sound was often muffled and out of synch, and the editing felt unfortunately abrupt.  Instead of Get Carter film clips, Nichols read excerpts from the book.

Blow the Bloody Doors Off! was a night of feel-good music.  It was all good fun but it didn’t quite live up to its full potential.

Blow the Bloody Doors Off! played for one night only at the Adelaide Town Hall as part of the Adelaide Festival program.