Cedar Lake Contemporary Ballet was formed in 2003 and its aim is to bring the world’s best choreographers to New York to devise exciting, modern ballet.

The dancers’ diverse ethnic backgrounds reflect the multicultural nature of modern life and they are equally comfortable performing traditional ballet, contemporary dance, rap, hip-hop and any other form required. For the Adelaide Festival’s Mixed Rep, three works by different choreographers are performed which provides a stimulating program rich in texture and variety.

The three choreographers have had distinguished careers with leading companies around the world, including the Nederlands Dans Theater, Sadler’s Wells and Batsheva Dance Company. The works are linked with the use of large, white lights, usually dimmed, which evoke feelings of isolation, struggle and strength, and the dancers are costumed mostly in muted casual, comfortable, contemporary clothing.

Jiri Kylian’s Indigo Rose begins with only a diagonal cable softly lit, while one male walks along its line until his head makes contact: three energetic, muscular dancers dressed in fine mesh tops and shimmering matching-coloured pants effortlessly leap and land as they explore the space, themselves and their relationships. The women – in shorts, stockings and corsets – are sensual and joyous. 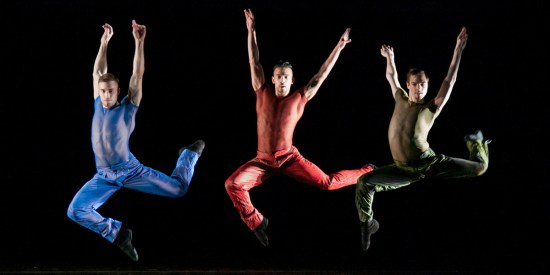 Kylian has used the music of Robert Ashley, Francois Couperin, John Cage and JS Bach in his exploration of the transient nature of youth and relationships. Although the dancers are meant to be aware that “perfection is impossible to achieve”, they themselves are close to attaining it.

A large silk sail on the diagonal cable provides an appealing backdrop, as well as allowing some inventive, clever and comic shadow dancing. A relatively brief video component is thematically linked with the idea of identity and self, but the dancers deserve to be the final focus of the dance.

Crystal Pite, choreographer of Ten Duets on a Theme of Rescue, has used Cliff Martinez’s music from the soundtrack of the film Solaris, with the lights positioned low and upstage of the dancers to create an atmospheric backlighting and haze that softly highlights skin and outlines of the duos.

The duets rapidly move from one to the other with barely enough time to identify the rescue explored within each dance, but there are recognisable heroic deeds as well as individuals needing rescuing from themselves. The final duet powerfully depicts a female leading slowly with strength and precision as she is followed by a frantic male moving rapidly and desperately until he falls exhausted.

The transitions between the duets often leads to an overlap, with one dancer being joined by someone new, suggesting a complexity of relationships and a range of rescues being needed.

Hofesh Shechter is both choreographer and composer for Violet Kid, the final work in an impressive program. Out of the darkness, a sudden shaft of light reveals the dance company standing downstage. A voice speaks of these days being “different” and we then witness 30 minutes of earnest, extraordinary individuals searching for meaning in a difficult and demanding world.

The dancing shifts from animalistic, tribal and primitive to something more ritualistic and ceremonial. Within the large group – united by its movement – individuals or small groups go against the grain in their own style or manner.

There are times when the company evokes images of violent protest and others when pairs or a group represent beauty, love and hope in a violent world. The dancers execute superbly Shechter’s notion that Violet Kid is about “man’s struggle for harmony within a complex and sometimes horrifying universe”.

Defining the Cedar Lake company as ballet or contemporary dance is irrelevant: its choreographers and dancers have created an exhilarating and uplifting evening.