In its Australian premiere, SmallWaR takes audiences on a haunting journey which explores the emotional and physical effects of war as experienced by those on the front line as well as loved ones left behind.

Set in 1914 in a field dressing station, the play features writer/director Valentijn Dhaenens (from the 2014 Adelaide Festival show BigMouth) as an unnamed nurse, dutifully watching over a critically injured soldier (also played by Dhaenens, whose immobile form is projected onto a television screen propped up on a hospital bed). The wounded soldier is unable to move or even scream; his voice rings out across the Space Theatre, lamenting the unfairness of his situation, the brutality that led him there and his growing desperation to return home. 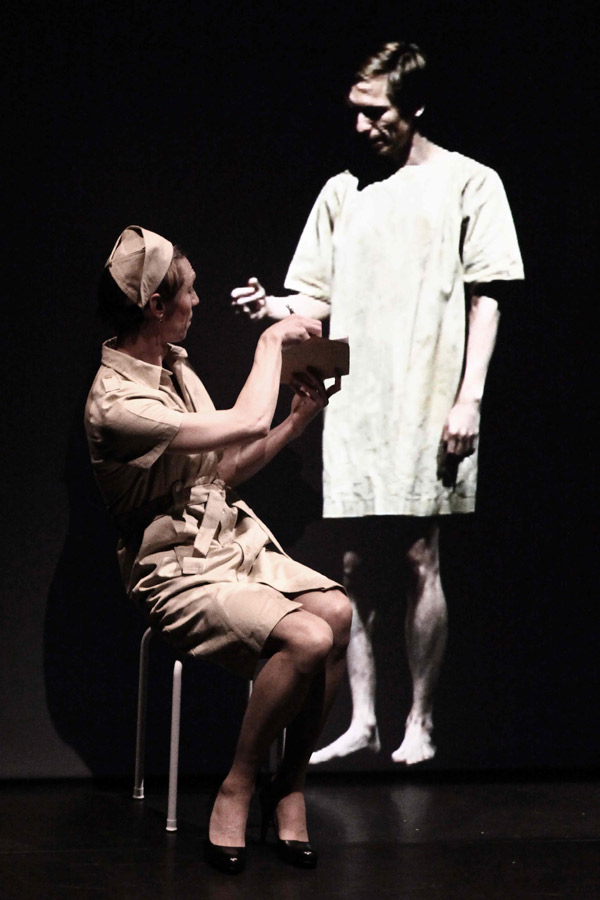 As the nurse tenderly cares for her patient, the audience witnesses several copies of Dhaenens emerge from the soldier’s unmoving body. Projected onto a black screen behind him, the digital incarnations show the soldier as a son, a brother, a lover and a father, forcing us to bear witness as one by one these relationships are forever changed by the widespread ramifications of war.

Dhaenens seems strangely at home in the nurse’s uniform, commanding attention from the moment his shadowy figure graces the dimly lit, sparsely furnished stage. His evocative monologue brings to life a world-weary woman who is forced to endure a metaphorical death as a means of dealing with the horrors she sees every day. As the immobile soldier, he brings to light the frightening experience of facing your own mortality.

Dhaenens expertly slips from one persona to another, delivering an emotionally charged performance that sends chills down the spine and brings tears to your eyes. From Dear John letters, to final goodbyes and fearful phone calls home, he examines the reality of war; the most heart-wrenching moment is listening to the disembodied soldier dictate a letter to his child, “Little Bean” – an infant he has never met and will never know.

The use of a digital screen helps add an otherworldly feel to the performance, as each ghostly version of the soldier rises from his body and flickers across the stage, fading in and out or eventually disappearing all together. A powerful script enables Dhaenens to create emotionally rich characters which portray the experiences of servicemen and women. His unnamed nurse, meanwhile, acts as a voice of reason, challenging the rhetoric of war and questioning why young people continue to risk their lives for ideals such as freedom and democracy.

Inspired by real-life testimonies and accounts from wars, including in The Falklands and Afghanistan, SmallWaR is a hauntingly beautiful performance.

SmallWaR is playing at The Space Theatre until March 4 as part of the Adelaide Festival program.